UEA Choir and Symphony Orchestra, under the direction of UEA's Director of Music, Stuart Dunlop, performed and American themed concert.

UEA Choir and Symphony Orchestra were joined in their performance of Porgy and Bess, by acclaimed soloists Maureen Brathwaite (Soprano) and Keel Watson (Baritone).

The Orchestra stand to take their bow after the concert

oir, under the direction of UEA Choir Director, Tom Primrose, performed music by Matthias, Rutter, Carter, Sweelinck, Poulenc and Willcocks, as well as a host of well-loved Christmas carols for the audience to join in with. The concert also featured performances from UEA’s recently formed Chamber Choir and solos from Norwich Cathedral’s Organ Scholar, Jonathan Stamp and pianist, William Fergusson.

The St John the Baptist Roman Catholic Cathedral was, in more ways than one, the perfect location for this evening’s performance. Aside from the obvious link between Christianity and Christmas carols, the cathedral itself, embodying this religion but built between the late nineteenth and early twentieth centuries, parallels the inspiration and composition of many of the pieces which featured in the programme. Examples included ‘Adam lay ybounden’, a fifteenth-century English text which was set to music by Peter Warlock (1894-1930), and ‘Quem pastores laudavere’, a fourteenth-century German carol in an arrangement by John 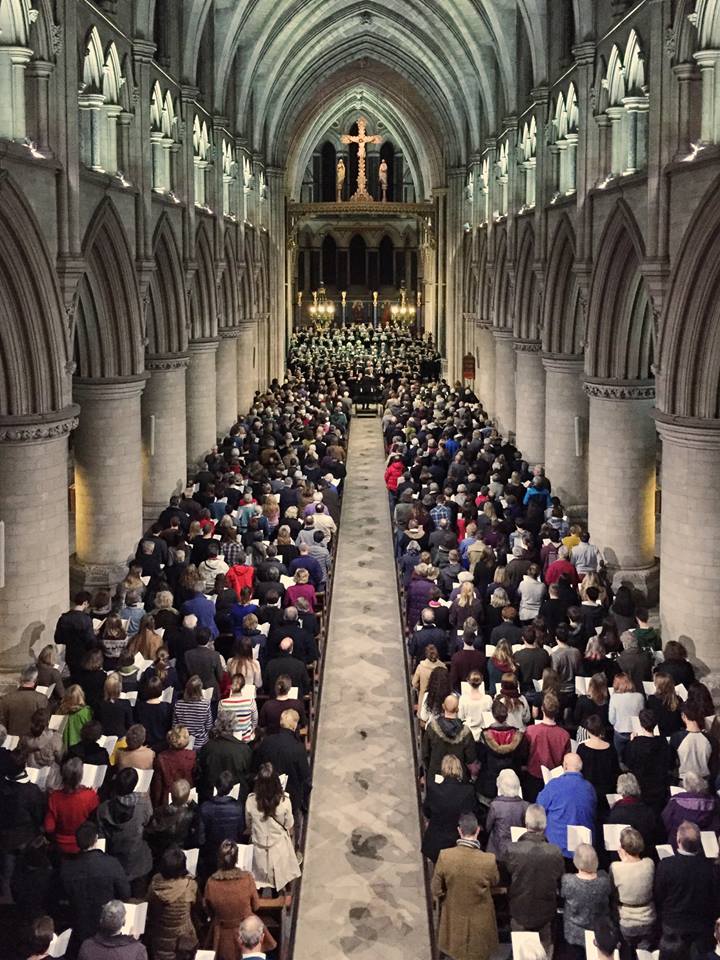 There were a number of unusual inclusions such as these, alongside the more well-known numbers such as ‘Once in royal David’s city’, ‘O little town of Bethlehem’, ‘Kings of Orient’, ‘Hark! The herald-angels sing’, and ‘Good King Wenceslas (-las, las!)’, which required audience participation. This, enthusiastically urged by the UEA Choir’s conductor, Tom Primrose, who also entertainingly introduced the carols, giving some facts and historical background, made the experience a genuinely warm and communal one. In addition to the UEA Choir’s vocal talents, there were energetic and impressive solos by their accompanying pianist William Fergusson, and organist Jonathan Stamp, as well as a handful of carols sung by the Chamber Choir, conducted by Stuart Dunlop. ‘O magnum mysterium’, and ‘Videntes stellam’ were highlights here. In overall terms, ‘Sing lullaby!’ was also truly stunning.

As ever, the sometimes gentle, sometimes fierce onrush of human voices which constitute a choir’s force occasionally had the power to rob you of breath, and not only when you reached the end of the long and lustily sung refrain from ‘Kings of Orient’. The musical talent of UEA certainly goes unremarked. One of the best experiences of tonight was the ability not only to enjoy their music, but to often join in as well. Trust me, when those final verses and choruses kick in, and you, singing the standard melody, hear and feel the choir’s new descants unfolding their wings and lifting the music ever higher, you’re hooked.

They were joined for their performance by organist William Falconer and actors Sophie Bray, Augustus Glassborow, and Pip Williams.

The concert also featured a performance by the Izliz String Quartet, of Joseph Haydn’s "Consummatum Est", from Seven Last Words from the Cross.

The Stabat Mater text describes the agonies of Christ’s mother as she sees him crucified. Haydn’s quartet arrangement of the last words of Christ from the cross breathes the simplicity of a great master at the height of his powers.

The 70-strong orchestra, under the direction of UEA Director of Music, Stuart Dunlop, performed four pieces based on the theme of transformation: Felix Mendelsohn’s magical Overture and Incidental music for Act III of Shakespeare's A Midsummer Night’s Dream, as well Sergei Rachmaninov’s beautiful Paganini Rhapsody and Gustav Mahler’s dramatic Totenfeier.

Mendelssohn’s music for A Midsummer Night's Dream accompanies changes of heart, Puck’s mischief, the Rude Mechanicals and, of course, Bottom’s transformation into an ass. In collaboration with UEA’s School of Literature, Drama and Creative Writing, UEA Symphony Orchestra presented a whirlwind of Mendelssohn and Shakespeare.

They were joined by pianist Warren Mailley-Smith, whose career highlights have included recitals at Carnegie Hall, Wigmore Hall, and appearances at Buckingham Palace.

Written in 1939 for the Festival of Music for the People, Ballad of Heroes is a work steeped in the political turbulence of the inter-war era. Duruflé's much loved Requiem, was completed in 1947 and is dedicated to his father, exploring themes of grief, the afterlife, forgiveness, and rest.

Don't worry if you missed any of these, there are plenty more upcoming concerts.