'I was scared. But luckily it worked out'

You may know him as the UEA student who rapped his dissertation, but that was just the beginning. 2019 graduate Nicholas Uzoka – aka Zoka the Author – speaks to fellow grad Emily Mildren about what he’s been up to in his first year since leaving UEA. 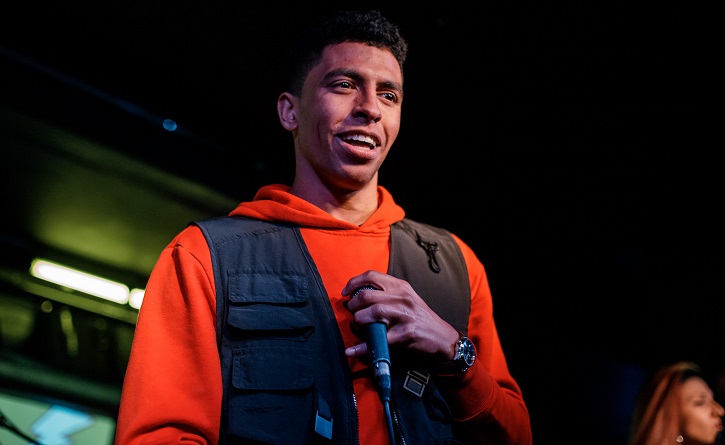 Nicholas is in between tutoring sessions, something he’s taken on part-time, when we speak on the phone. We’re talking about the perception that graduates find it hard to get into the so-called ‘real world’ after university. But it doesn’t seem to have affected him. Nicholas – aka Zoka the Author – is aiming for a career in music and he’s already well on his way.

‘Depending on what stick you’re measuring it by, it’s been quite crazy,’ he says, of what he’s been up to since uni so far. In the last year Nicholas has relaunched himself as an artist, begun work on his first debut EP and performed his first headline show, with a hundred-strong audience to boot. ‘I had a live band and I gave the show in a format that wasn’t quite conventional,’ he explains. ‘I’m an artsy fartsy literature student, so I turned the whole thing into a storytelling experience. I was scared, but luckily it worked out.’

He says as a recent graduate it’s easy to compare yourself to others. Those who have moved out (he lives with his parents) or are on a high salary already. Pursuing a career in music can be an expensive profession, and his current situation reflects his need to save and have time to work on his EP.

I ask him how the pandemic has affected the pursuit of his career. ‘It sort of stopped me in my tracks and I’ve not done as much as I’d like to. But at the same time my first headline show was one of my main objectives for the year.’ Before lockdown, he went to ‘about a million open mics’ in order to increase his following and work on his performances, and he’s been able to continue some of that success by transferring it to Spotify listens, which now exceed 5,000.

The pandemic affected his day job too, which was running after school clubs for local schools. ‘It was great until there was no schools to run an after school club at!’ he says, laughing. Nicholas then began tutoring online, and he enjoys having a job that enables him to use his talents to help people. It’s easy to hear the enthusiasm he has for his day job.

With Nicholas’ dream career happily drawing closer, I wanted to know what advice he would give to those graduating this year. His main words of wisdom: ‘Don’t compare yourself to other people.’

As a graduate myself, I can vouch for this. In the age of social media it’s all too easy to get hung up on where others are working, living or travelling. But as Nicholas puts it: ‘Everyone is posting their best selves. No one is saying “Ah, I woke up depressed as hell today.”’

The important thing, Nicholas says, is to ‘continue to graft and learn from your mistakes. Sometimes you might take a job you don’t like as much, to get the experience for the job that you do want. As long as you don’t give up you can go far, you can get to your goal. You just have to be patient.

‘I know for some people it’s the piece of paper you need to progress,’ he adds. ‘But for me, it was the chance to study. I went to UEA for the experience of university and the skills that I learnt whilst I was there.’

And I couldn’t agree more.

Use the hashtag #UEAGrad2020 for more