Professor Dylan Edwards arrived at UEA from the University of Calgary in 1998 - appointed as the Big C Chair of Cancer Studies in the School of Biological Sciences. His career has focused on the study of cancer biology, but he says there’s other big “Cs” that have driven his career and UEA’s success.

“Collaboration, cooperation and collegiality has been the guiding force behind my work and research. It’s all about bringing people together and building consensus to achieve great things,” he says.

The big Cs were clearly demonstrated when he coordinated the European Union Framework Programme 6 “Cancerdegradome” Project in 2004, which involved 41 partner laboratories in 13 countries. “This was so big for collaboration and one of my proudest times. Equally securing a €10m research project was a great moment. It brought together lots and lots of laboratories across the EU to work on a common project – helping to advance the understanding of an important class of enzymes in cancer biology.”

Prof Edwards became the Head of the School of Biological Sciences in 2008 and in 2016 was appointed UEA’s Pro-Vice-Chancellor for Medicine and Health Sciences, overseeing education and research in medicine, nursing and the allied health professions.

He’s clear that the University’s USP is its close connections to Norwich Research Park (NRP). He sits on the governing boards of all of the NRP research institutes and has served as Interim Director of The Earlham Institute – or The Genome Analysis Centre as it then was. The COVID-19 Norwich Testing Initiative for staff and students in 2020 was another example of that special collaboration. “Key people came together from across NRP to get that vital service up and running. Other universities would kill to be in the position of UEA with world-class health and science establishments on their doorstep.”

He says UEA must continue to build on its great sense of community – whatever changes it faces. “We need to embrace change and move forward in a new way,” he says.

Sustainability is part of that. He has chaired UEA’s Sustainability Board since 2018 and helped develop, along with other teams, UEA’s net zero ambitions - to be over 80% carbon neutral by 2030 and 100% by 2045 or earlier.

“We mustn’t see sustainability as a separate challenge. It needs to be central to everything UEA does. We need to tackle these things head on, bring people along with us and work to the common good to make it a success.” 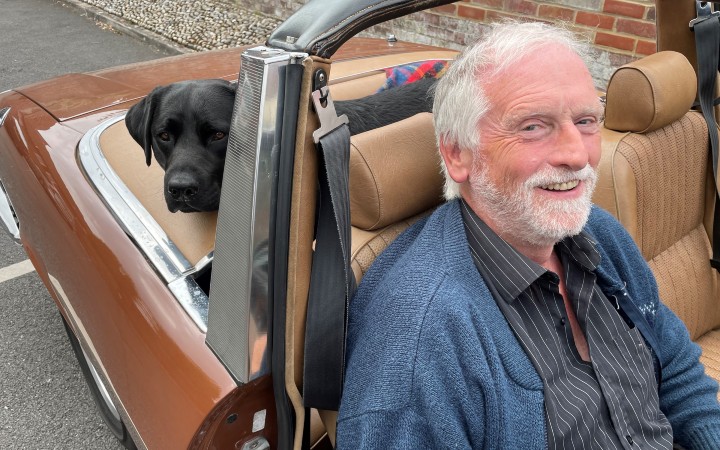 Prof Dylan Edwards with Monty in his Triumph Stag

The Cs will remain a key thread as Prof Edwards begins his retirement. He will continue as a trustee of the Big C cancer charity, but there’s an entirely new venture on the horizon. He’s hoping to train as a humanist celebrant. “This has come from my experiences of losing close family members over the past few years and I want to help others in that situation.

“I will also enjoy spending more time with my wife, Rosemary, my black lab Monty and looking after my old Triumph Stag sports car.”

But come a Friday night there’s another institution that he’ll miss. “Over twenty years ago, I started a `Thank Goodness it’s Friday’ – TGIF – event in the school of Biological Sciences, which is still running. It’s a time to get together at the end of the week with colleagues, sometimes their families, and have a chat and a beer. I will miss all my UEA colleagues, I have many long-standing friendships. But I think it’s quite likely I might turn up on a Friday afternoon at some point.”

A new centre for skills, productivity and Engineering for the region launches this month

A new education centre was officially opened in West Earlham, one which is set to benefit thousands of young people from the most disadvantaged backgrounds in...

The University of East Anglia (UEA) has maintained its place as a world top 100 university for Life Sciences degrees in the 2022 Times Higher Education (THE)...

Vattenfall partnership to unlock benefits of offshore wind to the region

The University of East Anglia (UEA) and Vattenfall have announced a partnership that will place the East of England at the forefront of the offshore wind...