In developing countries the world over, it can be a difficult task to develop robust and effective healthcare systems that are well-adapted to their needs.

More often than not, a lack of resources, knowledge and training can combine to severely restrict the provision of care, negatively affecting people's lives, and hampering the development of the countries themselves.

Improving primary care services is the first step in creating a robust healthcare system, and it's here that health bodies such as World Health Organization (WHO) have been focusing their actions over the past few decades.

UEA has also been involved in this work. Over the past 15 years, our team – led by Norwich Medical School's professor of health services research Max Bachmann – have teamed up with South African researchers at the University of Cape Town's Knowledge Translation Unit (KTU) in order to tackle some of the most pressing health issues in the country: tuberculosis, lung disease, diabetes, hypertension and HIV.

Throughout recent decades, these chronic conditions have exacted a terrible toll on South Africa – a country that has some of the world's highest incidence rates of the conditions – and the country's lack of healthcare access has severely reduced its national life expectancy. In 1996 it was 61 years, dropping to 52 years as recent as 2007, and today a child being born in South Africa is expected to live to around 57 years of age.

However, thanks to the efforts of UEA researchers and worldwide medical organisations, these conditions are being tackled, and the large body of research conducted by UEA and Professor Bachmann is having a dramatically positive effect on healthcare systems across South Africa and, indeed, the developing world. 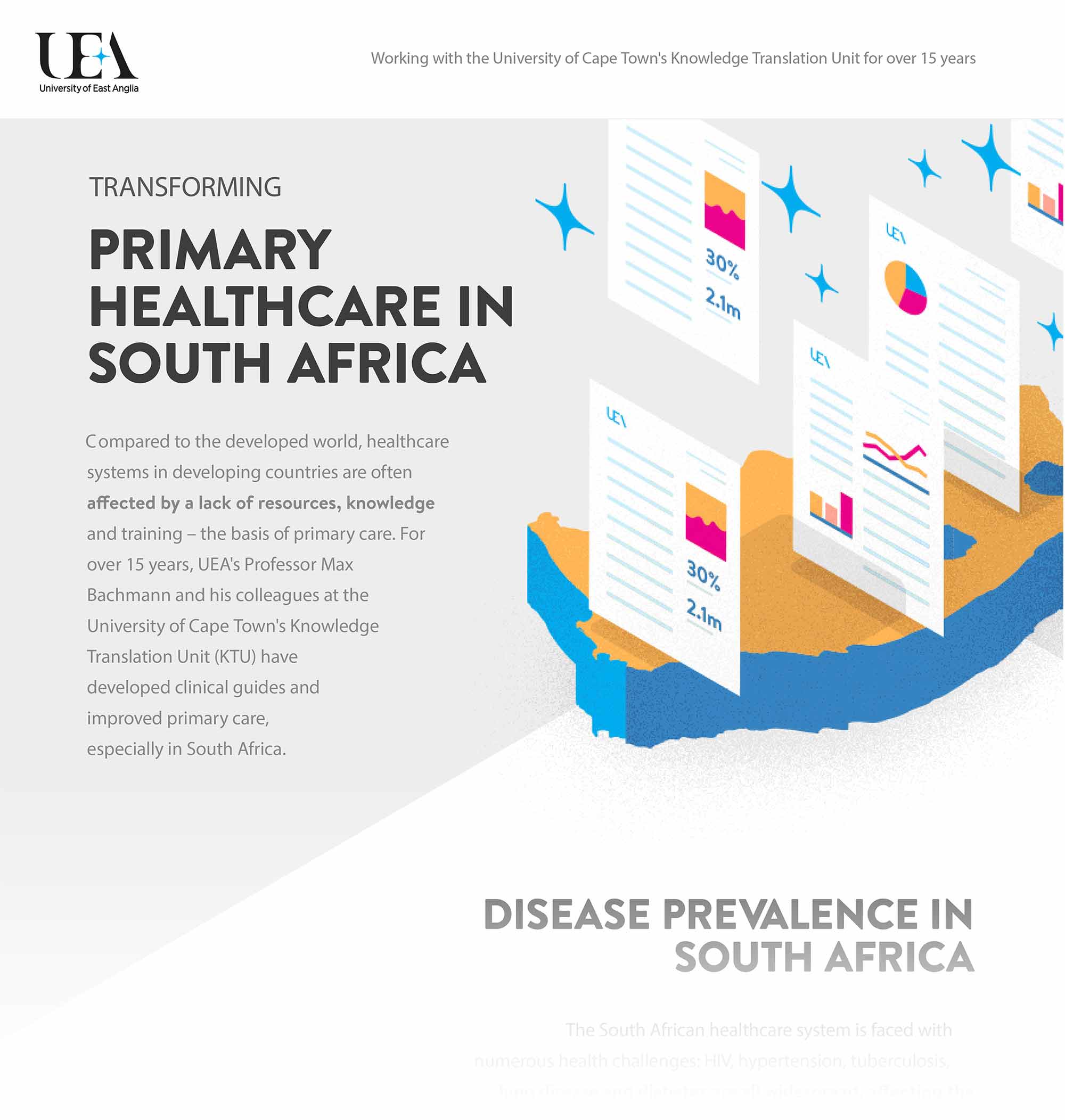 Since the early 1990s, Professor Bachmann has been heavily involved in South African medical institutions. In 2000, he assumed the role of head of the Department of Community Health at the University of the Free State Medical School, before moving to UEA in 2003. In 2000 he was contacted by WHO in order to develop and evaluate new clinical practice manuals for frontline primary healthcare workers in developing nations.

With a specific focus on improving the South African health service's approach to respiratory care and tuberculosis control, Professor Bachmann and his colleagues set about improving the guidelines – completely redesigning them, in most cases. A novel educational method was used, covering diagnosis and treatment of a range of conditions and procedures, from how to detect tuberculosis infections to how to prescribe antibiotics.

This method, called educational outreach, used a cascade approach; first teaching trainers, who then went on to educate frontline primary healthcare workers. This education model was effective and could be scaled to cover the entire country, all because it was delivered in realistic clinical settings, used existing health department staff, didn't take health workers away from their places of work, and was designed to solve the problems that the health workers had themselves identified.

When a randomised control trial was conducted on the new intervention – christened PALSA (Practical Approach to Lung Health in South Africa) – in Free State in 2003, the results were staggering. The successful diagnosis of tuberculosis was improved by an overwhelming 60%, and both emergency referrals and asthma treatments were improved upon. Understandably, PALSA was adopted nationwide.

HIV was – and still is – an enormous problem in South Africa, and soon after PALSA was determined a success, Professor Bachmann and his team began adapting the guidelines to include HIV and sexually-transmitted infections – known as PALSA PLUS.

Over 2009 and 2010, the new guidelines were trialled via a large pragmatic randomised trial which determined that the new measures were particularly effective in improving the quality of HIV care provided by doctors and nurses. What's more, it was discovered that both PALSA and PALSA PLUS were improving the cure and treatment rates for tuberculosis.

As a result, PALSA PLUS was made standard in two provinces during 2009 and 2010, before being adopted nationally in 2011.

Despite the researchers' laudable endeavours, there was still more to be done. Instrumental in the tackling of HIV, antiretroviral treatments (ART) are the key weapon in reducing the mortality rate of HIV and staving off AIDS, although at the turn of the decade, South Africa was only relying on doctors to administer and provide the treatments – a slow-paced process.

The KTU set out to understand the impact of restricting the administering of antiretrovirals, and the results were sobering. 53% of patients were dying while waiting for ART treatments, yet mortality was seen to be reduced by 87% when ART was accessed.

The solution, while being controversial and contrary to the desires of a number of health actors in South Africa, was to train nurses to conduct the treatments. To facilitate this, Professor Bachmann and the KTU researchers brought together a new set of primary care guidelines – Streamlining Tasks and Roles to Expand Treatment and Care for HIV/AIDS (STRETCH) – which allowed nurses to fulfil this role.

When a pragmatic randomised trial was conducted soon after, it was seen that nurse-led ART was just as effective in preventing HIV deaths and suppressing the virus, and more effective in improving patients' weight, immunity, and adherence to treatment, as doctor-led processes. Within months, nurse initiation and monitoring of ART was adopted across South Africa, rapidly allowing 3.6 million people with HIV to access ART.

Impressed by the successes of PALSA PLUS and STRETCH, the South African National Department commissioned the researchers to expand the guidelines, so that chronic illnesses such as diabetes, hypertension, chronic lung disease and depression could be covered – in an initiative called Primary Care 101 (PC101).

The trial of PC101, in the Western Cape province, wasn't as much of a success as Professor Bachmann and his colleagues had hoped. At the same time as the trial, the South African health department launched a campaign to intensify chronic disease care in all clinics, improving care in clinics that had not received PC101, as well as clinics that had. So it was difficult to prove that PC101 was effective on its own.

The team were pleased, nevertheless, to find that their new guidelines were met with widespread acclaim and popularity among South African healthcare professionals, leading PC101 to be adopted as standard care for all of the country's public sector clinics. These serve some 44 million people – 80% of the population – and national policy now states that every one of the 3500 public sector clinics in South Africa should use PC101.

The impact of PALSA, PALSA PLUS, PC101 and STRETCH has been enormous, so much so that all have been incorporated into the Practical Approach to Care Kit (PACK), alongside guidelines relating to other non-communicable diseases and mental health care.

This new, all-encompassing package is being marketed internationally by British Medical Journal (BMJ) Publishing, with BMJ Clinical Evidence providing its continual review and updating of evidence. Professor Bachmann and the KTU's work will soon be launched in Brazil as PACK Brazil. They are applying for funding in order to expand into Sweden and Portugal, and plan to adapt PACK for South African children and youths, as PACK Child and PACK Adolescent.

UEA has been particularly active in conducting research to show that these interventions are effective, cost effective and feasible, and this evidence has convinced policy makers and health professionals at all levels that they are just what is needed.

UEA's work has been instrumental in improving the access and quality of care in South Africa, and will soon be helping hundreds of millions more across the globe.