SINK OR SWIM: JOHN LYDON ON THE SHEER THRILL OF PERFORMING LIVE 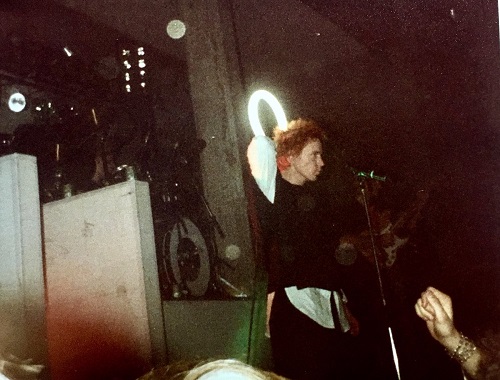 Can you hear me?

My opening questions were in danger of sounding like a Public image Limited lyric; certainly not how I’d imagined an interview with John Lydon (or was it?). After several failed attempts to connect UEA landline to LA landline, I’d put my mobile onto speaker and sat it down beside the recording app on my iWotsit.

Lydon: You sound like you’re in a phone booth.

Oh the phone booth - that icon of ‘70s Britain. Much like himself, perhaps.

Homework included watching YouTube clips, with a bored, young Lydon ending interviews abruptly and being all rotten. His memoir ‘Anger is an Energy’ was compelling and surprisingly sweet. Lydon was clearly a man inclined to the contrary – confounding fans with that Country Life butter advert in the ‘90s yet still touring and still passionate about Public Image Ltd.’s music and the joy of live performance.

Lydon: You see the teeny bopper girls all the way back to the balding professors, and everything in between - for me, that’s confirmation that what we’re doing is beyond the norms of music…we’re not a manufacturing outfit just endlessly rolling out products for you to absorb. There’s more going on – there’s an up close and personal thing here that’s beneficial to both us and the audience.

‘The Public Image is Rotten’ – the UK, Europe and Japan tour - kicks off on 30 May in Bristol and includes UEA’s own LCR on 6 June. The band celebrate their 40th Anniversary this year, joining the many punk and post-punk bands, ahem, doing the same thing. Surely PIL weren’t the types to jump on this kind of bandwagon?

Lydon: I couldn’t care if it was the 39th…41st or 30th…it’s just that we ‘landed well’ on this date. I’ve got so many things going on. So many products coming out at once. It’s almost like I’m flooding the market! Why not? I mean, good taste is rare…

Rare indeed, and it’s great that PIL included Norwich amongst the Tokyos and the Amsterdams.

Lydon: I always remember Norwich. We lived in that part of the world when I was younger, when my dad worked on the oil rigs… Bacton-on-Sea. And then of course, there’s Norwich City. They’re the team I adopted when I lived up there. I chose them because of the scarf. I just loved the canary yellow and green – I thought it was great!

Working on UEA’s gig history project for over a year now, I’d noticed a distinct synergy between fans of live music and fans of football. Was Lydon a fan of collecting memorabilia, in the manner of many football and gig fans, or would he confound once again and think it a bit sad? Amongst the 2016 punk anniversary celebrations, Joe Corré (son of Vivienne Westwood and Malcolm McLaren) had burnt all the punk memorabilia from his parents’ collection. Did Lydon applaud this? (Was it punky?)

Lydon: I thought that was a hopeless, tragic act of a spoilt, over-educated and under-developed arsehole. He could’ve raised money from this stuff and given it to charity – to kids in orphanages – and not be so self-aggrandising. He was nothing to do with it in the first place and he’s still got nothing to do with it. It was an act of childish spite and petulance. Very unimpressive. Just yawn…people like that don’t deserve the air space…

UEA has, of course, very sensibly, kept hold of its own memorabilia but, amongst the listings and tickets and photos and contracts there’s a poster that perhaps shouldn’t have been preserved, advertising a gig that never happened: the Sex Pistols gig from 3 December 1976. Did he remember the cancellation?

Lydon: Yes! And well done - I could’ve done with a night off and you gave me it!

But surely an apology was in order?

Lydon: I’m just very pleased to be on the much shorter list of cancelled gigs…I’m a standout kind of guy! All this came up the last time I was there, it was like apology central! And I thought, ‘come on, get over it…I did!’

So that was that: apology definitely accepted; extinguished even. And now he’s coming back, again.

They played here in 1983 (and 2015). The gig history project had gleaned a few eye witnesses from the ’83 gig who talked about how they’d had urinals on stage with them. Someone had sent in a photo. Someone remembered a few boos. Had he been trying to shock with that stage set?

Lydon: No. No – quite the opposite. I wanted that whole bathroom, white tile, clean thing and thought, that’s alright, let’s just put some urinals in. We did the whole tour like that. I just thought it looked kind of cleansing somehow.

He’d looked so very young in that photo…

Lydon: I know where you’re going with this…like a fine wine, I’ve matured with age!

Lydon: Oh, please let it be! It’s my smartarse one-liner.

Fine wine or no, how on earth did he find the energy to tour still? Did he limber up?

Lydon: It’s more mental with me. I’ve gotta get my head framed properly. I don’t know how to practice or rehearse or exercise – I usually leave it to the week before, you know? I seem to thrive in that situation where I have to force myself into it at absolutely the last minute. That’s where I excel. I like that. Here I am in my 60s and I’m not going to change that. If I was by the piano doing F chords, you know, it would be “f-ing” chords…it would remove the risk and sheer thrill of live performance for me. It’s fear before you go on, but once on it’s like ‘wow, I’ve really put myself in this’ – it’s a sink or swim moment. And I choose to swim.

And Lydon still likes to swim in smaller venues. The current tour includes a number of quirky sounding Tramsheds and Cheese and Grains amongst the Academies. The punk anniversaries celebrated in Norfolk included memories of a venue called the West Runton Pavilion; in fact, the Sex Pistols played there in 1977. Did he remember that one?

Lydon: Yes. It was around that time I developed my love for really neat, small, little, clubby venues. You know, tiny theatres – I love the atmosphere. It really is so up close and personal, and warming to be able to see the eyes of most of the people in the house. That’s a pleasure for me and so that’s what we go out of our way to do. Those gigs are few and far between these days. Such a shame. There’s PIL out there, keeping these venues alive! I want to feel attached to the band when I go to gigs. It’s an intimate moment you’ll never forget.

I’ve loved PIL since I was a young student in the 80s. I was delighted to see that PIL had bothered to keep its own gig archive and share it on the website (I woz there: London Astoria 1987). We all seemed to be in tribes in those days but I didn’t associate PIL with a particular style – it was just music I really liked. And its double bluff messages made me feel like I was listening to something clever - which suited my art school pretentiousness at the time.

Lydon: Yeah – we threw the rule book out the window. It’s like, learn as much as you can, then throw it all away! You have to have the foundation to begin afresh – that’s the point of education really, to put yourself in a position of deciding what is and is not relevant.

Who inspired him now?

Lydon: Anything and everything. It’s not just music. TV, bits of work, books, anything. But mostly, I’m finding my own experiences and diving into what emotions are and how you control them and when you shouldn’t…You should analyse yourself all the time. And in that way I can proudly say that I’m my own worst critic and that keeps me very healthy indeed. You could look at that another way too – beat the bastards to the punch! Learn how to duck out the way…

A friend had wanted me to ask Lydon whether he thought the Sex Pistols could exist today. I thought the answer was obvious – that nothing could top the much picked-over, grim ‘70s backdrop studied by punk academics in places like UEA.

Lydon: Yeah! I mean, anything is possible if there are enough like-minded, brave enough types out there – in the right circumstance, yeah, of course it’s possible. There’s absolutely as many things to moan about today as there was then and to my mind, the concept of ‘why bother, it’s all been done before’ is an old concept, and that’s been done before so move on.

My time to move on. I was two minutes over my allotted thirty and anyway the battery on my elderly phone was nearly out. Time for the big one:

Do you have a message for UEA students?

Lydon: ‘Give up! You’ll never make it. We’re all doomed’ (laughs). Seriously - do the best you can. Squeeze as much out of the education system as you possibly can then discard about seven eighths of it – I mean, forewarned is forearmed is the way to approach this world, you know? Anyone can sit at home and be stupid.