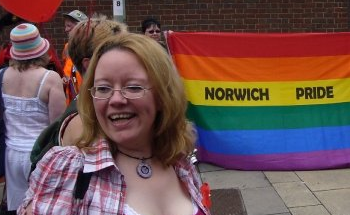 Growing up in Great Yarmouth in the 1970s, in that ancient period before public internet and when there were still only three TV channels, I didn’t have ready access to information related to anything remotely queer.  I just knew that my best friends were mostly boys and that we all liked the same girls.  Libraries gave the occasional hint, mostly via books from Women’s Press, and there was the occasional late-night film though they didn’t show the most positive role models then. I remember Radclyffe Hall’s Well of Loneliness and BBC2s showing of The Children’s Hour depressed me for weeks. The advent of the internet was the single best thing that ever happened to me because I could finally find positive representation of people like me.

I have never faced overt homophobia in my working career though I know many people who have.  I’m sure that at some point there were people who didn’t approve of my orientation but they never made it obvious.  I may have been incredibly lucky in that regard, but finding official support, or being part of an LGBTQ+ network at work, didn’t happen until I came to UEA, first as a student, then as a member of staff.  As a student, there was official representation at SU, and my lecturers helped me in learning how to use queer identity as a part of my studies.  As a member of Staff Pride at UEA, I feel part of a community that works to increase inclusivity, celebrates diversity and grows better every year, which I love.  Plus, we have really good social events!

I’ve gone from being a confused child in a pre-internet world to an out and proud member of Staff Pride at UEA.  Now, when I’m confused, it’s mostly by social media apps like TikTok, rather than anything to do with my identity.  I have ready access online to positive representations of queer people just getting on with their daily lives in a way I never would have believed was possible when I was growing up in Great Yarmouth. Though I know we have a long way to go before the world is truly equal for everyone, it fills me with joy to see how things have changed for the better in so many ways since I was born at the end of the 60s.  Though that may feel like a long time some mornings, from a historical perspective it’s really not, and I remain hopeful for our future.