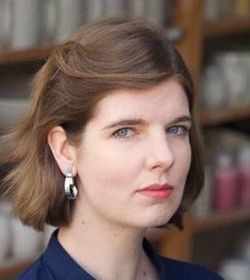 Elizabeth MacNeal's The Doll Factory was published in April 2019. She talked to us about how her time on the UEA Creative Writing MA helped to shape her first novel.

"Suddenly, I was surrounded by those who shared my passions, who took each other seriously, who wanted to learn, to discuss writers they admired.  It was wonderful"

what drew you to studying at uea, and how did you find it?

I have been aware of UEA’s creative writing MA for ten years, ever since I first started writing. When I finished my undergraduate degree, I was deterred from applying as I felt I was too young for the course. Instead, I wrote two novels with very little support and no tuition. When these were rejected by publishers, I decided to apply for the MA. While there were many people on the course younger than me (I was 27/28), I am glad I waited. I feel that I got more out of the MA than if I’d studied on the course at 21, in that I was applying at a point where I had already pushed my writing as far as I could alone.

I loved every element of the course, and around March was seized by a panic that the year would soon be over. I think one of the best moments was the very first day. For me, writing had always been so solitary, so private. Suddenly, I was surrounded by those who shared my passions, who took each other seriously, who wanted to learn, to discuss writers they admired. It was wonderful. There were of course challenges along the way – sharing my work was very daunting. But I did the course to push myself, to throw myself out of my comfort zone, to fail and learn, and ultimately this improved my writing quite drastically. Without the course, I know that I wouldn’t have had the confidence or the skills to write the novel I have, at least not for several years.

I did the course to push myself, to throw myself out of my comfort zone, to fail and learn, and ultimately this improved my writing quite drastically"

In what ways do you think the course improved your writing, and set you up to write The Doll Factory?

When applying to UEA, I thought a lot about how to get the most out of the course. Taking a year out of work, funding it, and moving cities, was a significant sacrifice. I decided that, rather than starting a new novel and workshopping the same work each time, I would write short stories. That way, I would be able to experiment with all kinds of styles, settings, voices and characters, and hopefully find an idea or a voice which was suited to me. Lots of my stories were pretty dreadful, but I am glad that I produced so much raw, unpolished work as it helped me to improve. Meanwhile, I took modules on character, on historical fiction, on crime and thriller fiction, where we unpicked novels to understand how Hilary Mantel built a historical world; how Patricia Highsmith deployed tension; how Mohsin Hamid used voice. I read prolifically and wrote quickly, ambitiously, and often badly. I tried not to worry about starting something longer. It wasn’t until about May that I realised that two of my (entirely unrelated) short stories could be fused into one novel. The idea grew from there, my tutors and peers were enthusiastic, and I knew I had my novel.

"UEA gave me the confidence to write the novel I wanted to read, and indeed that I didn't think I was capable of writing."

What is your greatest achievement so far?

My greatest achievement is definitely finding a publisher for my novel, The Doll Factory. As I mentioned, I have been writing seriously for ten years and encountered setback after setback. UEA gave me the confidence to write the novel I wanted to read, and indeed that I didn’t think I was capable of writing. One rainy Tuesday in February, I sat on my sofa all morning, and opened email after email forwarded by my agent, containing offers from editors. Within a day and a half of my novel going on submission, we had offers from fourteen publishers. It was mad and wonderful.

How did you find Norwich as a city? Is there anything in particular that you miss or have fond memories of?

I loved Norwich, and I miss it very much. I shared a cottage in the grounds of the cathedral with somebody who did the reverse of me: I had it Monday-Thursday (as I live in London and returned there on the weekends), and he had it for the other days. I miss the ease of walking everywhere, the pretty cobbled streets, the excellent cafes where I’d hole up with my laptop and write for hours on end. I miss the fish and chips from a stall in the market.

"I loved Norwich, and I miss it very much.  I miss the ease of walking everywhere, the pretty cobbled streets, the excellent cafes where I'd hole up with my laptop and write for hours on end"

Would you recommend studying at UEA? Why?

I would definitely recommend studying at UEA. I had the most wonderful year there: I learned so much, and I do not believe I would have been able to write my novel without having done the course. The tutors were excellent and really nurtured my prose. More than anything, I have a wonderful supportive group of friends as fellow-writers. A group of us in London meet once a fortnight to workshop our writing.

As an alumna, what motivates you to donate to UEA?

The idea that I would be supporting somebody who wants to make the most of their writing, who just needs that extra tuition and support as I did, and who would not be able to afford it otherwise.