Steve Waters, Professor of Scriptwriting, assesses the damage done to the cultural sector in the UK and asks if the recently announced financial support scheme will be enough.

"I felt that profound loss, not just of the beleaguered ‘Night Life Economy’, but of all those silenced stories, those performances squeezed into an online tile; and felt theatre’s pain all over again" 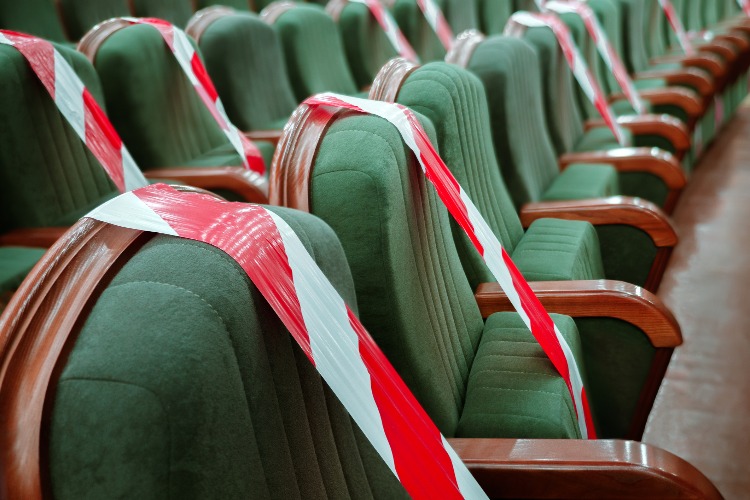 A drab October Monday in the limbo of the new normal, the nation’s venues and arts organisations scramble to check their email. Are they on that vital spreadsheet from the Arts Council England that might bail them out until the longed-for vaccine? The lucky recipients excitably log on to Twitter to announce their joy and gratitude; in the outer darkness between the end of the furlough and the vagaries of the Job Recovery Scheme, the massed ranks of freelancers are rather more muted.

I am reluctant to praise this Government for anything after their disastrous handling of the Covid catastrophe - but after a painfully slow preamble, Oliver Dowden, Secretary of State for the Ministry for Culture, Media and Sports, has honoured his billion-pound pledge. The wait is over for some, but the real wait continues for the artists that bring life to those hundreds of buildings now operating with skeleton staffs in more ways than one. Is this how theatre gets out of the ICU? The first faltering steps are being made and I can’t help thinking of the melancholy lines from Brecht’s Mother Courage: ‘Wherever life has not died out/It staggers to its feet again’.

But theatres need artists and most of all audiences - so the vital question for all of us is: have you been to see anything? Yes, the buildings may edge open but will we, the audience, risk entering them? I hold up my hand for my own cultural cowardice, having restlessly scanned the listings of the Cambridge Arts Picturehouse but failed to get there before its second closure this year. But I did venture to the theatre for the first time since, gosh, March. Admittedly my writing was part of the event so the impetus was a little stronger; I had been invited to pen a short piece to celebrate the 50th anniversary of the Young Vic, which the actor and director Matthew Dunster had heroically taken on. I was allocated two prized tickets, so last week my daughter and I masked up, boarded a train (remember boarding a train? First one since, well, March) and headed to London.

We walked through a spookily quiet Bloomsbury, down through the boarded up West End theatres boasting shows I have never wanted to see but which now strangely missed. We crossed Waterloo Bridge to see the friendly livefeed scroll on the front of the National Theatre poignantly announce the forthcoming opening of a monologue on one of the largest stages in the world. Everything the same, nothing the same. I felt that profound loss, not of just of the beleaguered ‘Night Life Economy’ but of all those silenced stories, those performances squeezed into an online tile; and felt theatre’s pain all over again.

So to see life in the Young Vic…to see its Artistic Director, Kwame Kwei Armah, presiding over The Cut Bar, to see Pappa Essiedu chilling by the Gents, felt like entering an oasis from a parched desert. To enter the space, we had to be lined up in intervals along the Cut like a ID parade; then we were permitted entry into the dark womb of that almost taboo realm – the auditorium. Masks on of course; separated by dark banks of seats. But there we were, that most endangered species of all: the Audience. And for the next 90 minutes unmasked actors sang and danced and - yes - performed new stories, never before seen, speaking to a now that our screens seem unable to reach – I think of Jasmine Lee Jones’ astonishing monologue ‘Black Pain REDUX’ which spirals out of a set of meditations on the murder of George Floyd into a piercing anatomy of loss. I hardly dared to breathe through its fifteen minutes length; it moved me more than any culture I have experienced in this abolished year. Why? Because it was live and it was there, in front of me. And perhaps we were too cautious in our masked laughter and our scattered applause, but the old adage that people enter the theatre as individuals and leave as an audience (albeit one ushered out by a SWAT team of Front of House staff) was unmistakably the case.

Some theatres couldn’t last until the Cultural Recovery Fund kicked in – the Nuffield in Southampton, for one. If London loses a theatre the wound is deep; if a regional city loses one, it’s a mortal blow to the whole community. Like a relative anxiously scanning a list of survivors in a disaster, we scan the spreadsheet to check cherished venues are permitted to live to fight another day. But for all the relief, one tweet from Neil Fisher simply proclaimed the hidden reality: ‘It doesn’t help freelancers. It doesn’t help freelancers. It doesn’t help freelancers’. And all this in a week during which the Government drop an ad entreating wannabe ballet dancer Fatima to consider a new career in IT. Because the downside of largesse to venues is Rishi Sunak’s rather more Darwinian notion of sidelining ‘unviable’ jobs whilst urging thousands of arts workers to get on their bikes and re-train whilst we await the elusive vaccine. Given that many of them subsidised their low-paid arts careers in the very Night Life Economy also in crisis, this felt like yet one more icy neoliberal slap in the face for our entertainers.

No, the Cultural Recovery Fund is not the panacea it seems; a building without artists or audiences is just another boarded-up shop, open only for its staff. Frankly we need a plan that brings together the sector, setting aside the rivalries and regional distinctions, the branding and the fragmentation. Theatres somehow must share their life-support with their artists, share their recovery plans, cultivate their audience and chart a way out of this wilderness. That requires leadership from Government as well within the sector, not just a bung, however welcome. I have been deeply moved by the efforts of my fellow workers in the theatre and have seen real signs of that needed for collaboration. And I have nothing but admiration for the courage of staff who have ventured into mounting shows and making work. Because it’s the infectiousness of that very courage that will get people back into the auditorium and enable the missing part of this cultural recovery – the return of the Audience.