A Tale of Two Trees

Ask someone who works or studies at UEA and it's not unlikely that they will have a favourite tree on campus. There are, after all, plenty to choose from - from the towering Scots Pine (above) to the bird-busy willow on the far side of the broad.

Dr Tom Greaves, Senior Lecturer in Philosophy at UEA, writes about two of his favourites, and reflects on the dynamic of art and nature to be discovered beneath their canopy of branches. 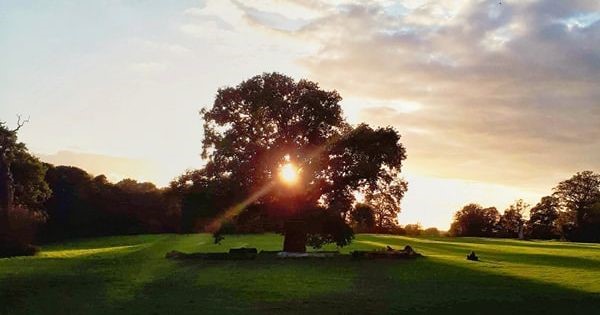 It was the best of times, it was the worst of times – there are any number of reasons that the opening line of A Tale of Two Cities might resonate with us at the moment. For nature lovers the ambiguity of the times manifests itself in particular ways. A lucky few like me have had a little more time to enjoy our gardens, allotments and jogs around the park. Many others have had their already restricted contact with nature even further curtailed.

Our campus is a wonderful place to connect with nature and I know my colleagues and students will have missed that connection since the campus has been closed. There are two trees in particular that I always think of when I recall the natural wonders of UEA; two ancient oaks standing at opposite ends of the campus. The first is likely to be familiar to anyone who has visited and glanced over the field adjacent to the welcome Lodge. The second is more secretive. Many people will have spent years at UEA without noticing it.

The first tree now stands alone. It has been surrounded by large logs to protect it. These give it a sculptural aspect, marking its canopy spread on the ground that surrounds it. These logs are also often used as seats by its visitors. It spreads itself open and expansive against the skyline, welcoming all comers.

The second tree grows secluded amongst others behind the Sainsbury Centre (see the UEA tree trail map). It secludes itself, with a canopy that obscures a direct view until you enter the copse and get right up close to it. Despite exploring the campus regularly after my arrival in 2006, it was only in 2013, when I arranged a tour of campus sculptures as part of our 50th Anniversary celebrations, that Professor Richard Cocke introduced me to this tree. It is at least 400 years old and its branches twist and turn in on themselves, sometimes fusing together and creating an intricate maze as you look up at them from below. I was delighted when I saw that this tree has now been marked as one of the sculptures to visit on the UEA sculpture park trail. I have often taken visitors and groups of students to visit it in the years since Richard introduced me to it.

For me these two trees symbolise a dynamic that we find everywhere in nature and also in works of art. The first tree opens itself up to the sky and its surrounds. The second tree closes in on itself and creates a shaded clearing under its branches. Of course, that kind of dynamic is also at work in the growth of each individual tree, as its canopy spreads open up to the sky and its roots burrow into the ground. The philosopher Martin Heidegger has argued that this dynamic is also to be found in works of art, in what he called the ‘strife between world and earth.’ In the Chinese philosophy of Daoism we find the same dynamic at play in the creative tension between Yin and Yang, the dark enclosing movement and the light opening movement.

The great thing about the living nature and the sculptures that we have on our campus is that they are outside. We can enjoy them even at times when we are not able to be indoors together. I do hope that more people will be inspired by our current circumstances to visit these trees, and perhaps to consider the dynamic of art and nature to be found there. I have found that doing so can make for the best of times.

More from the UEA Community Blog: Climate Change and COVID 19

Find out more about Philosophy at UEA