How we got the world talking about a royal shipwreck

The Gloucester, a royal warship commissioned in 1652, was carrying the future King James II when it sank en route to Edinburgh on 6 May 1682. The tragedy occurred when the ship ran aground, striking the Leman and Ower sandbanks about 45km off Great Yarmouth.

Between 130 and 250 of the Gloucester’s estimated 330 passengers and crew died, leading to a cover-up that shielded the heir to the throne from political fallout regarding his role in the disaster.

The shipwreck was finally discovered by divers Julian and Lincoln Barnwell, and James Little, in 2007. It is now the only known surviving third-rate Cromwellian-era warship.

The Gloucester Project, led by Claire Jowitt, Professor of Renaissance Studies at the University of East Anglia, casts new light on the history of the vessel. Using new archival research, it tells the story not only of its service history as a working ship, including its last voyage, but also reappraises the significance of the tragedy politically, culturally and in terms of its huge importance to UK maritime history.

The first paper from the project – “The Last Voyage of the Gloucester (1682): The Politics of a Royal Shipwreck” – was published on 10 June 2022, coinciding with the announcement of the discovery of the Gloucester.

Prof Jowitt planned and organised the project meticulously with a small team, including Dr Benjamin Redding from UEA’s School of History, and began work almost three years before the lead article was published in The English Historical Review.

Open research practices, such as making all material available for peer review, were integral to the project, ensuring as many people as possible could be made aware of the significance of the Gloucester in British history. 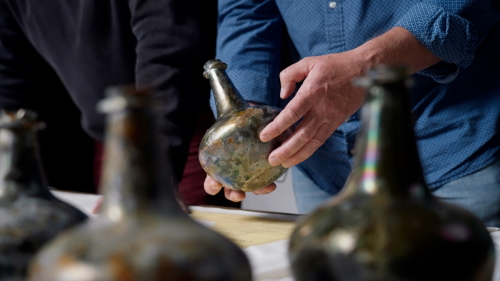 “Open-access publication allows the research to be more widely accessible,” says Prof Jowitt. “It can be read and reused by members of the public, journalists, researchers in developing countries and other individuals not based at academic institutions.”

This meant that there was a year’s gap between the first article being submitted and it finally being published. It’s also important to note that open-access publication comes with increased costs.

“My article cost approximately £3,200 to publish,” says Prof Jowitt. “Fortunately, the project is funded by the Leverhulme Trust, and open-access publication is an eligible cost for this research funder.”

Upon publication, it became immediately clear that the extra effort to coordinate the project via open research was worthwhile, with the lead article from The Gloucester Project being widely read and extremely well received.

“Within a week, the Observatory of International Research were reporting it as the highest trending paper not only in history but in all subjects,” Prof Jowitt recalls.

And within two months it had become the highest trending research paper in history for the previous year. Not only that, The English Historical Review –  the oldest journal of historical scholarship in the English-speaking world, founded in 1886 – reported that it is the journal’s most-read article ever.

The Gloucester Project has enjoyed huge reach thanks to an open research approach, further helped by its online resources. A dedicated website is home to all publications and information that puts the project in the wider historical context of the Restoration and the Anglo-Dutch wars, with all material free to access.

And it’s not just the general public that benefits – journalists also used the material for coverage as soon as the Gloucester’s discovery was announced. This helped to inform the 1,660 items of media coverage in June 2022 alone, with Prof Jowitt’s article often used as the primary source for major news outlets across the world.

Further research collaboration is anticipated, especially as the ship sank so quickly, meaning it effectively became a sea-floor time capsule of 17th-Century life, with many more materials yet to be excavated and recovered. The ongoing media interest is also expected to generate further coverage and collaboration.

The process has left Prof Jowitt in no doubt as to the benefits of open research.

A major exhibition, The Last Voyage of the Gloucester: Norfolk’s Royal Shipwreck 1682, will be held at Norwich Castle Museum and Art Gallery from 25 February to 10 September 2023.

Learn more about The Gloucester