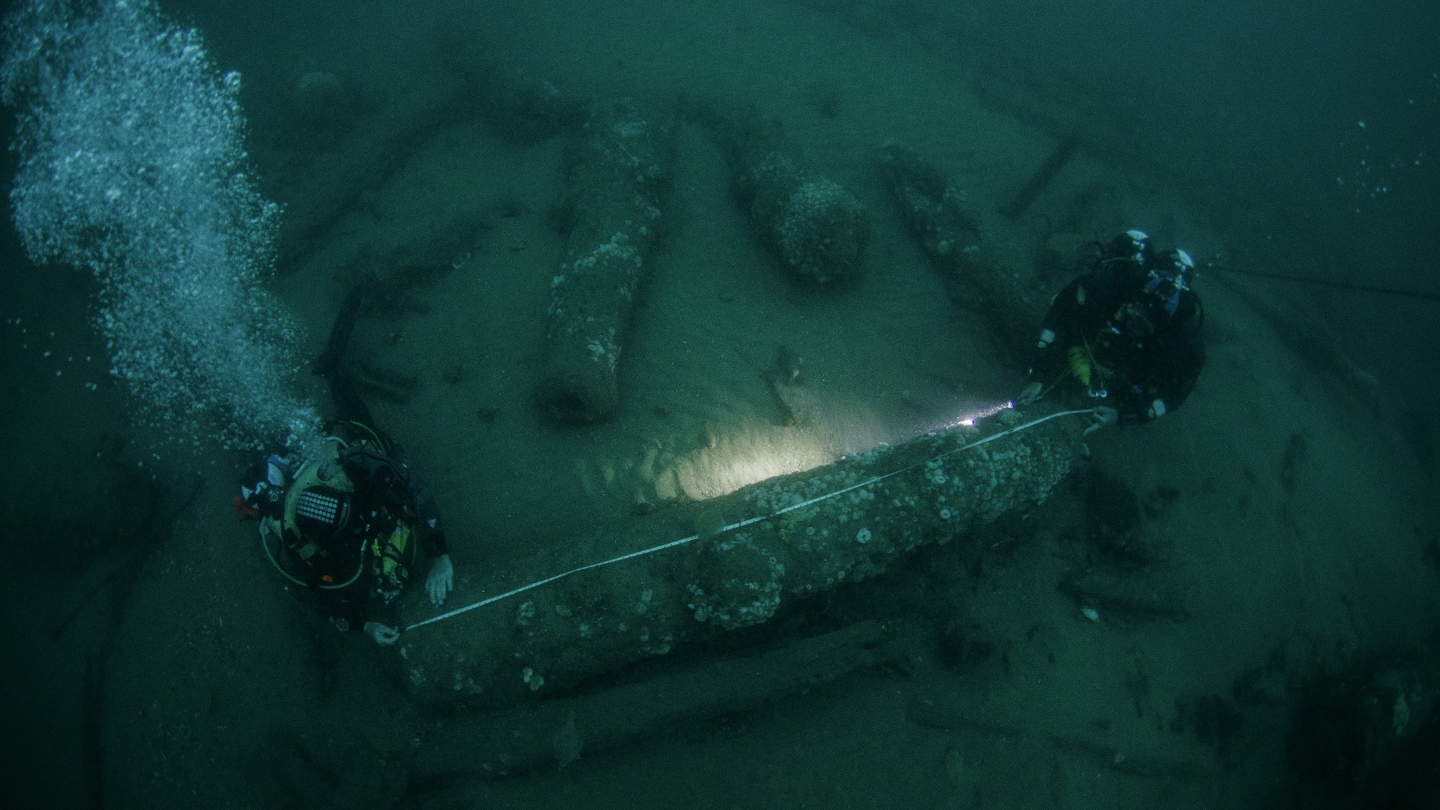 The wreck of a royal warship which sank 340 years ago while carrying the future King of England and Scotland, James Stuart, has been discovered off the coast of Norfolk in the UK.

Since the Gloucester sank on 6 May 1682 the wreck has lain half-buried on the seabed, its exact whereabouts unknown until brothers Julian and Lincoln Barnwell, with their friend James Little, found it after a four-year search. Due to the age and prestige of the ship, the condition of the wreck, the finds already recovered, and the accident’s political context, the discovery has been described as the most important British maritime discovery since the Mary Rose.

A major new historical research project, funded by the Leverhulme Trust and led by Prof Claire Jowitt, Associate Dean for Research, Faculty of Arts & Humanities, UEA will now explore not only how and why the Gloucester sank, but conspiracy theories about the tragedy's causes and its political consequences.

UEA is the academic partner of the project and co-curator of a major exhibition, The Last Voyage of the Gloucester: Norfolk’s Royal Shipwreck 1682, planned for spring 2023. The exhibition is the result of a partnership between the Barnwell brothers, the University and Norfolk Museums Service. Running from February to July at Norwich Castle Museum & Art Gallery, the exhibition will display finds from the wreck - including the bell that confirmed the ship’s identity - and share ongoing historical, scientific and archaeological research.

UEA’s Prof Jowitt and Dr Ben Redding are writing a cradle-to-grave history of this 17th-century warship to assess its contribution to naval history and the wider importance of this world to our understanding of early modern social, political, and cultural history. It is also hoped that UEA’s scientific expertise and facilities will be used to analyse some of the finds from the wreck

A new paper by Prof Jowitt, The Last Voyage of the Gloucester (1682): The Politics of a Royal Shipwreck offers a comprehensive academic analysis of the disaster and its political implications and legacies.

The Gloucester was commissioned in 1652, built at Limehouse in London, and launched in 1654. In May 1682 it set sail on its final voyage. The ship was carrying James Stuart, then the Duke of York and Albany, to Edinburgh to rejoin his heavily pregnant wife and their households. They aimed to return to King Charles II’s court in London in time, it was hoped, for the birth of a legitimate male heir.

At 5.30am on 6 May, the Gloucester ran aground 45km off Great Yarmouth following a dispute about navigating the treacherous Norfolk sandbanks. The ship sank within an hour, with the loss of hundreds of the crew and passengers, although the Duke survived. 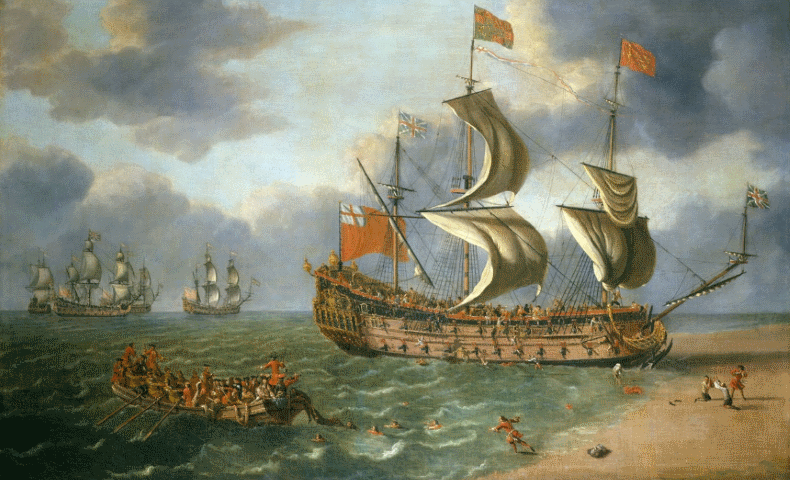 The Wreck of the Gloucester off Yarmouth, 6 May 1682, by Johan Danckerts, c. 1682. Image courtesy of Royal Museums Greenwich 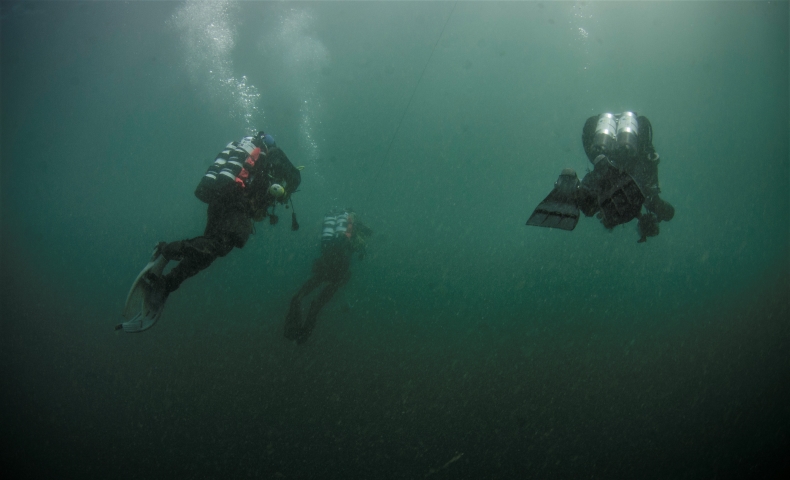 Divers decompressing during an exploration of the site of the wreck, Image courtesy of Norfolk Royal Shipwrecks 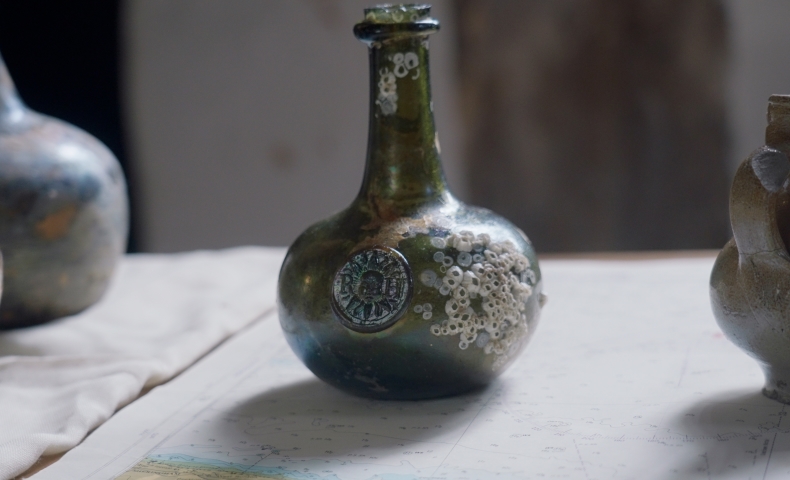 A globe bottle with a glass stamp, recovered from the wreck of the Gloucester 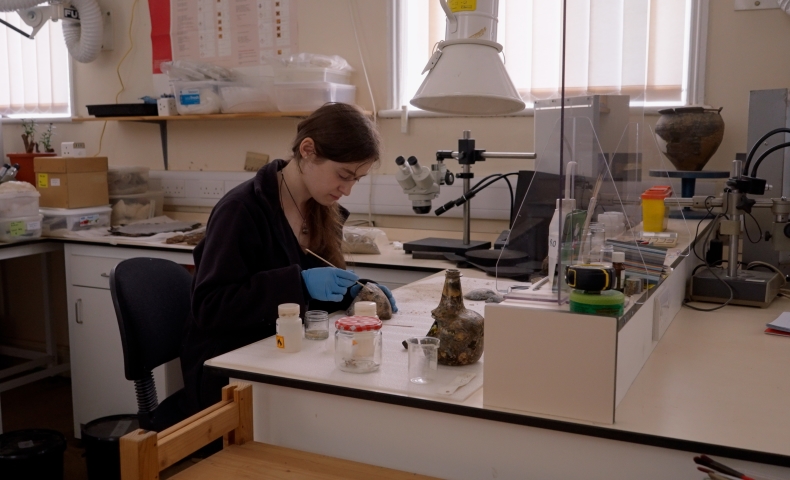 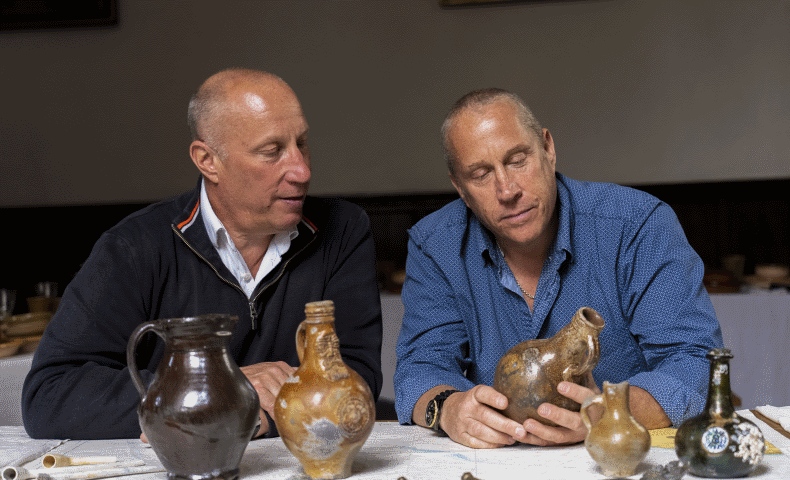 Julian and Lincoln Barnwell with some of their discoveries 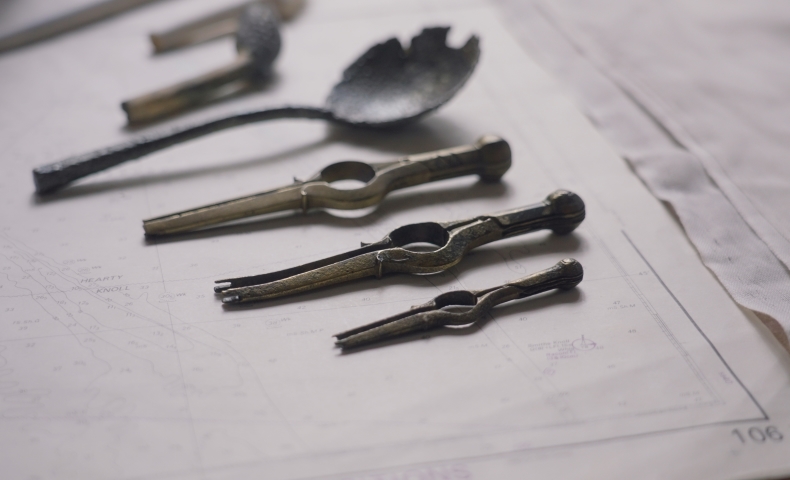 Historic items including a spoon and pipes

As well as the Duke of York, who would later become King James II of England and King James VII of Scotland, the Gloucester carried several prominent English and Scottish courtiers including John Churchill, later the 1st Duke of Marlborough. Diarist and naval administrator Samuel Pepys, who witnessed events from another ship in the fleet, wrote his own account, describing the harrowing experience for victims and survivors, with some picked up “half dead” from the water.

The Gloucester represents an important ‘almost’ moment in British political history: a royal shipwreck causing the near-death of the Catholic heir to the Protestant throne at a time of great political and religious tension.

More than 300 years later the Barnwell brothers, their late father Michael and friend James Little found the wreck site after a four-year search. The Gloucester is split down the keel and remains of the hull are submerged in sand. The ship's bell, made in 1681, was later recovered, and in 2012 it was used by the Receiver of Wreck and Ministry of Defence to decisively identify the vessel.

"Julian and Lincoln have touched history, history that could have changed the course of this nation. It’s such an amazing story to tell. Our aim is to bring that story to life and to share it with as many people as possible."
Lord Dannatt, Norfolk Deputy Lieutenant

Following the discovery, the brothers completed an underwater archaeology course with the Nautical Archaeology Society. Artefacts rescued and conserved include clothes and shoes, navigational and other professional naval equipment, personal possessions, and many wine bottles. One of the bottles bears a glass seal with the crest of Colonel George Legge, Master of Ordnance and Groom of the Bedchamber to the Duke of York. Legge was the son of Elizabeth Washington, and the Washington crest on the wine bottle, with its distinctive 'stars and stripes', links it and the ship to the most famous member of the family, George Washington, the first US President. The design is found on the Purple Heart, a US decoration awarded in the name of the President to those wounded or killed while serving with the military. Uniquely, in addition there were also some unopened bottles, with wine still inside - offering exciting opportunities for future research.

Alongside UEA, Norfolk Museums Service and the Barnwell brothers, foundational partners in the project are the Alan Boswell Group, the Ministry of Defence, the National Museum of the Royal Navy in Portsmouth, York Archaeology, the Leverhulme Trust and Maritime Archaeology Trust. The project is also being generously supported by Birketts LLP.

Norfolk Museums Service (NMS) is a multi-award-winning service comprising ten museums and a study centre, ranging from the Norman splendour of Norwich Castle to the beautiful 50-acre site of Gressenhall Farm and Workhouse and the restored herring works at Great Yarmouth, home to the atmospheric Time and Tide Museum. All NMS sites are Accredited museums under the Arts Council Accreditation scheme and many of the collections in our care are Designated of national importance.
NMS is now regarded as one of the leading museum services in the United Kingdom, being recognised in 2012 as an Arts Council England Major Partner Museum (MPM) and a National Portfolio Organisation (NPO) in 2018, tasked with providing leadership to the sector, including through our SHARE Museums East Museum Development programmes. Norfolk Museums Service is a partnership between Norfolk County Council and Norfolk's district councils, funded through council tax, earned income and grants. www.museums.norfolk.gov.uk

Since its foundation in 1925, the Leverhulme Trust has provided grants and scholarships for research and education, funding research projects, fellowships, studentships, bursaries and prizes; it operates across all the academic disciplines, the intention being to support talented individuals as they realise their personal vision in research and professional training. Today, it is one of the largest all-subject providers of research funding in the UK, distributing approximately £100 million a year. For more information about the Trust, please visit www.leverhulme.ac.uk and follow the Trust on Twitter @LeverhulmeTrust.

Claire Jowitt is Principal Investigator on The Gloucester Project. She joined the University of East Anglia in 2015 as Associate Dean for Research for the Faculty of Arts and Humanities and Professor of Renaissance Studies. She has published seven books and more than fifty essays and chapters on maritime history and culture and travel writing studies. She is a General Editor of the new Oxford University Press edition of Richard Hakluyt’s The Principal Navigations (1598−1600), co-edits Amsterdam University Press’s Maritime Humanities 1400−1800: Cultures of the Sea book series and is an elected member of the Council of the Hakluyt Society.

Benjamin Redding is Senior Research Associate on The Gloucester Project. He joined the School of History at the University of East Anglia in 2020. He has published essays and chapters on early modern naval history, several of which have explored the design, decoration, and iconography of warships. His recent book The English and French Navies, 1500-1650: Expansion, Organisation and State-Building was published by Boydell & Brewer in 2022.

* All artefacts remain the property of the Ministry of Defence; however, where items are positively identified as personal property, ownership will then default to the Crown.

The wreck of the Gloucester off Yarmouth, 6 May 1682 by Johan Danckerts, Royal Museums Greenwich 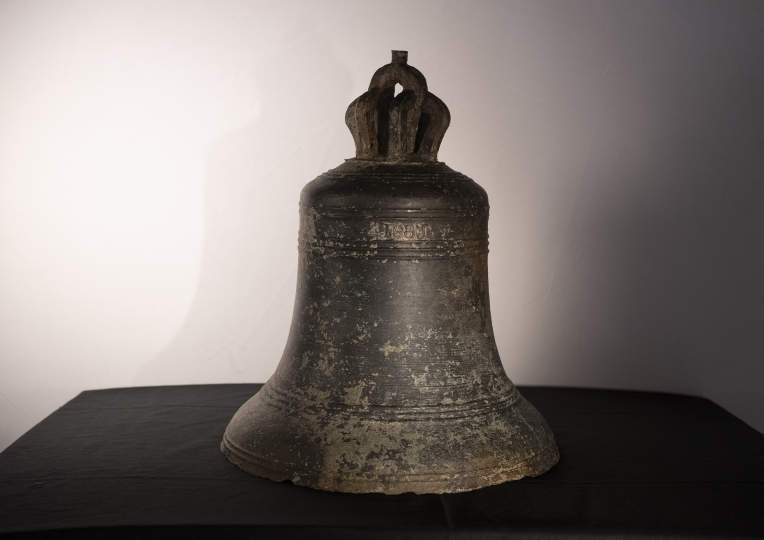 The Gloucester Project
student looking at exhibition in Sainsbury Centre 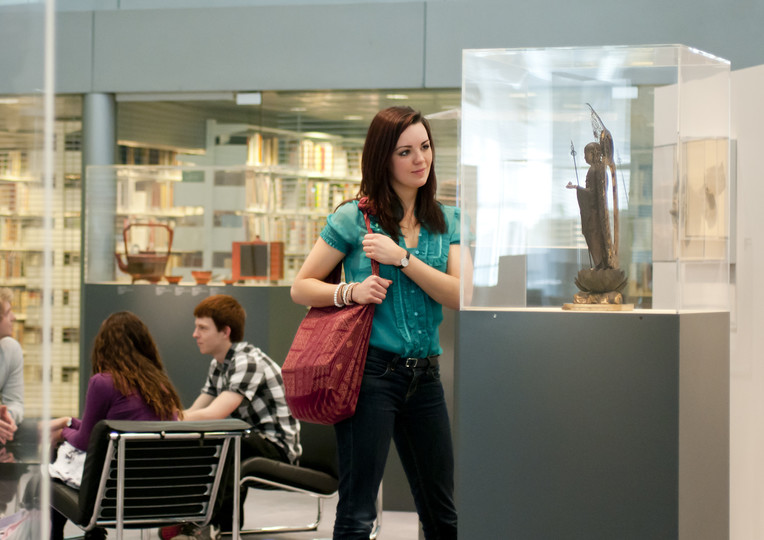 Research in the Faculty of Arts and Humanities
Back to CreativeUEA