Humans have used fingerprints to establish identity for thousands of years but new technology is now revealing there is even more information to be disclosed by our fingertips.

The delicate whorls and ridges on your fingertips set you apart from every other person in the world, with even identical twins having unique patterns on their hands and feet.

Hard to alter, human fingerprints remain relatively unchanged over the life course making them ideal as long-term indicators of identity.

Now, revolutionary technology developed from research carried out at UEA is showing that evidence of drug use can be detected in the minute traces of sweat found in a fingerprint.

Evidence of fingerprints being used to identify a person can be found as early as 3rd century BC China but it wasn’t until the 18th century that European scientists began to understand unique characteristics of the fingerprint. Throughout the 19th century the idea of using fingerprints as evidence of identity gathered momentum and today, fingerprinting forms the most commonly used method of forensic evidence across the world.

UEA’s Prof David Russell first became interested in fingerprints when his lab’s research revealed that the sweat deposited by fingerprints could be shown to contain drug metabolites or trace chemicals of substances a person had consumed, injected or inhaled.

"...what’s really significant about the new technique is its potential to combine drug detection with verification of identity through a unique fingerprint."

To test the initial research concept, Russell enlisted the help of a group of cigarette smokers and non-smokers at UEA. Using fingerprint analysis Russell’s team correctly distinguished smokers from non-smokers by detecting traces of cotinine (the metabolite of nicotine) in their fingerprint sweat.

"Prof Russell’s research was published as the first example of fingerprint-based drug detection," says Dr Jerry Walker, CEO at Intelligent Fingerprinting. "And what’s really significant about the new technique is its potential to combine drug detection with verification of personal identity through the individual’s unique fingerprint."

In 2007 Russell set up Intelligent Fingerprinting as a UEA spin-out company to explore new technologies which could simultaneously detect evidence of drug use whilst establishing identity.

Our bodies process, or metabolise, everything we consume – whether it’s a cup of coffee or an illegal drug – to produce chemicals known as metabolites which are specific to the substances we have ingested. These metabolites are present in our system for several hours or even days and can be detected in our blood, urine, saliva and sweat.

Intelligent Fingerprinting’s scientists have developed highly sensitive reagents for the detection of these trace substances in fingerprint sweat, which they have incorporated into a novel non-invasive Drug Screening System.

"Starting our company in close collaboration with the uea business team afforded us access to their experienced ip, marketing and pr teams. all of these facilitate faster progress."

Drug Screening at the Touch of a Fingertip

The new system is portable and easy-to-use, screening for multiple drug groups from a single fingerprint sample. Unlike conventional screening methods which require the collection of saliva or urine samples, the new technique is non-invasive, dignified and non-biohazardous. 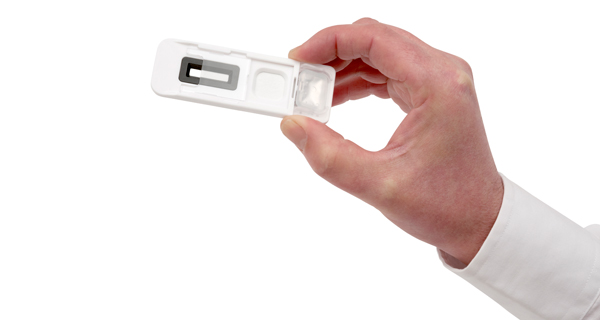 "Starting our company in close collaboration with the UEA business team afforded us access to their experienced IP, marketing and PR teams. All of these facilitate faster progress and keep the University up-to-date on progress within the company." comments Dr Jerry Walker, CEO at Intelligent Fingerprinting.

"More recently we have placed three students on integrated internships for up to a year which have developed products and IP for the company and shown both undergraduates and graduates how our company functions under its ISO standards and commercial priorities."

The new technology has significant commercial implications, and it has already attracted worldwide interest across many sectors, from criminal justice and drug rehabilitation to healthcare and homeland security.

In recent years, several rounds of impressive funding injections have seen the company grow substantially, including a recent £2.5m investment from private UK and US investors to complete development of the company’s first products.

It is clear there exists huge potential for the new drug screening technology, with the company exploring global opportunities from North America and Australia to South Africa. It’s not just new markets they are interested in discovering, there are new applications to be determined too.

In fact, the company is currently carrying out a pilot scheme with UK Coroners, perhaps a surprising new direction for the team. Coroners currently have no easy means of determining drug use prior to death without commissioning invasive post mortem tests. In a trial with the Sheffield Legal-Medico Centre, and with relatives’ consent, mortuary staff are using the new, non-invasive technique to collect and analyse sweat from the fingertips of the deceased to provide an early indication of whether or not drug use may have contributed to the person’s death.

"It has been fascinating to watch this technology being developed stage by stage..."

Mr Christopher Dorries OBE, HM Coroner South Yorkshire West Area said: "It has been fascinating to watch this technology being developed stage by stage. The testing so far has suggested that this will be a really useful tool for bed-side toxicology indication, albeit not intended to be evidential. It should alert us to the cases that need to be subject to full toxicology, and in some cases, may obviate the need for any toxicology tests at all."

The new non-invasive technology has potential for use in a variety of other drug screening situations including drug rehab clinics, prisons, roadside policing and to establish fitness for duty in safety critical workplaces such as the transport and construction industries.

"Our innovative Drug Screening System can be used anywhere, anytime," says Dr Walker.  "It takes only a few seconds to collect a fingertip sweat sample for analysis and the new technology offers a safer, more dignified way of testing compared with conventional drug screens which involve bio-hazardous samples such as blood, urine or saliva."