To Switch Or Not To Switch

At the heart of competition lies us, the consumer, whose freedom to choose underpins our ability to discipline suppliers and to influence market prices. But in the energy market the government has intervened to set a maximum price for consumers who are not actively choosing between suppliers and tariffs. This follows reports from the UK competition and markets authority that weak consumer responses in the retail energy and banking markets have played a role in limiting effective competition.

Why is price regulation for a majority of consumers being reintroduced, sixteen years after it was removed so that the market could operate freely and benefit from competitive pressures?

The work of Professor Catherine Waddams at the Centre for Competition Policy (CCP) at UEA has been at the forefront of exploring why so many of us consumers do not switch to cheaper energy providers.

Understanding inertia isn't easy, although arguments that highlight the time it takes to change supplier, demographics and consumer expectations have all been studied in the past.

While some consumers prefer energy deals more suited to them as opposed to, for example, cheaper tariffs, others feel they have better things to do than worry about their energy providers. There are also people who cannot switch and some who choose not to.  Each issue leads to the question of inertia and the consumer's inclination to change suppliers. 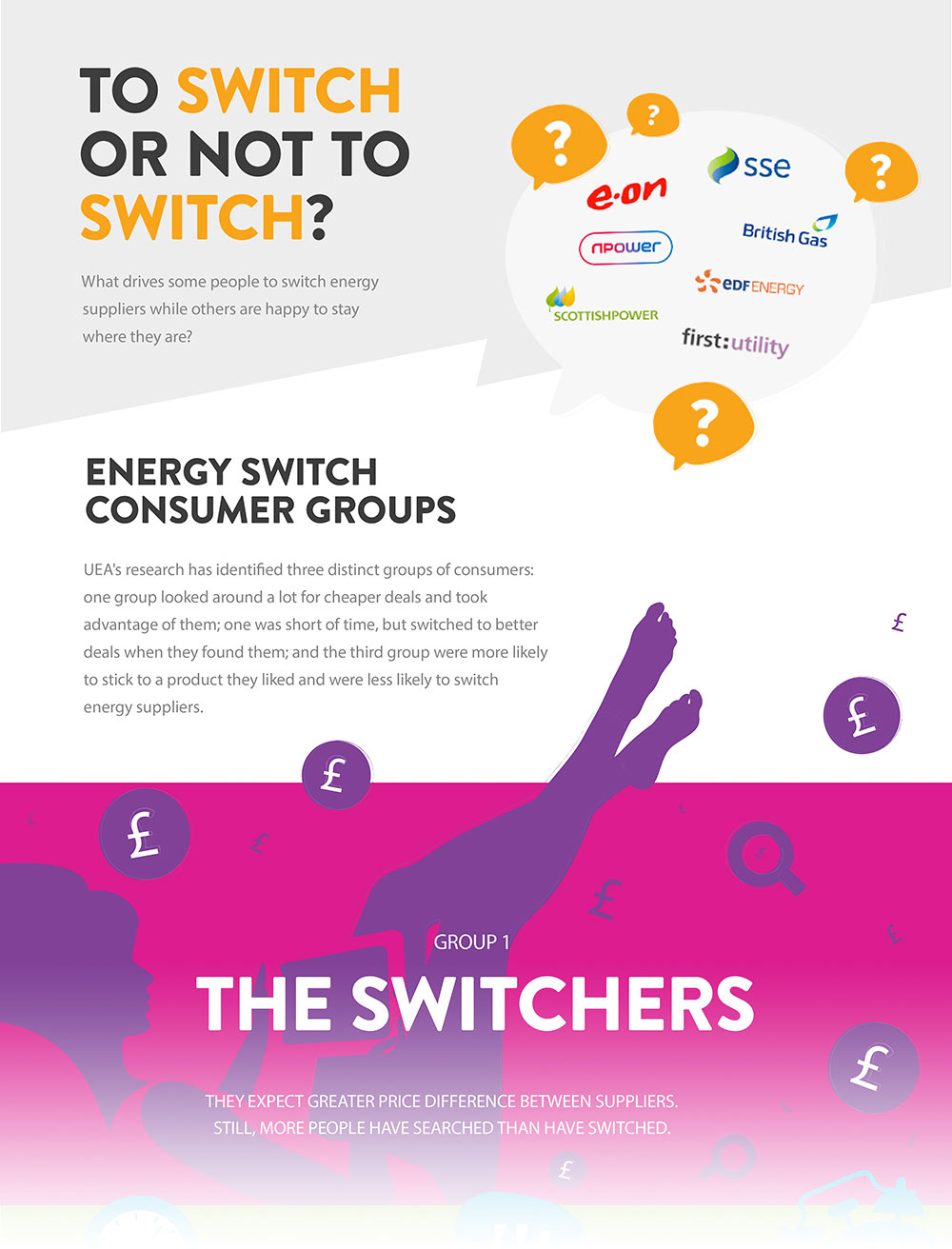 To understand such inertia further, Professor Waddams and Dr Miguel Flores explored whether or not switching energy supplier related not only to obvious drivers such as expected savings, but also to six general attitudes to shopping, such as 'life is too short to worry if you are getting the best deal around' or ‘I would be upset if I found out later that I could have got a better deal’. On the basis of these attitudes they found three distinct groups of consumers emerge: one group looked around a lot for cheaper deals and took advantage of them; one was short of time, but switched to better deals when they found them; and the third group were more likely to stick to a product they liked and were less likely to switch energy suppliers.

Professor Waddams and Dr Flores found that different factors drove searching and switching behaviour within each group. For example, in groups 1 and 3, searching is associated with more frequent use of the internet, while there is no such relation in group 2; however this group is more likely to search and switch if they are confident in estimates of potential gains, a factor which is not associated with activity for the other two groups.

The only consistent influence on switching across the groups was the size of anticipated savings, but these expectations too varied between consumers. In particular, older consumers expected lower savings than others, which explained less switching among the over 65s. These findings show policy makers that they need to find different mechanisms to encourage more consumer activity and entice suppliers to charge lower prices to attract them.

As Flores and Waddams show, consumers do not always behave as standard economic models predict when changing supplier or in choosing their supplier, and this has an impact on how the market functions. It is at this point where the case for better regulation from regulators like Ofgem can be made.

Such a scheme would invite suppliers to bid for groups of consumers using an auction-type framework to offer them a better deal; but unlike most existing collective switches, consumers would be changed to the cheaper option unless they opt out of the auction or the offer. The supplier with the lowest tariff could then offer their services, fairly, to a market that may have been vulnerable otherwise. While there are several issues around implementing such a scheme, the CCP team has suggested such an auction could provide protection for some consumers while increasing competitive pressures in the market, rather than dampening competition as the Government’s proposed price cap will do.

The Need for Better Regulation

According to Professor Waddams, the energy market for households is at an important turning point.

"We have a choice between protecting consumers through controlling the price they pay, and encouraging competitive pressures to bring those costs down. Consumers are not encouraging competition by reaching for the lower prices which are available to them. Many experts hope that the cap will be only for the short term, and one of the things they put a lot of faith in is smart meters and the additional information that they will provide for consumers."

Based on this, it is believed that consumers will be able to make more informed decisions when it comes to their energy suppliers and may be more likely to switch as a result.

But the work on consumer inertia by Professor Waddams and colleagues raises doubts about how actively consumers will respond to these extra data.

Because of consumer inertia, the Government is intervening to control energy prices, which will lower competitive pressure, and will reduce rather than encourage switching as available savings from changing fall. Work at UEA, in particular that of CCP, will continue to provide valuable evidence on consumer behaviour and to challenge regulatory assumptions.