More a gentle push than a crush 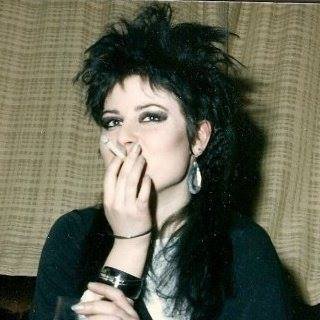 Now let me see. December 1982. I would have been near the end of my first term at Art College in Lowestoft. And I was in the middle of a transition.

I’d been listening to Joy Division all summer and I’d decided I didn’t want to be a hippy any more. Ian Curtis’ voice had stirred something in me and suddenly ‘yes’ just didn’t cut it. I was more ‘no’.

I’d not been to a gig in Norfolk before. My first gig experiences had been at the Ipswich Gaumont; catching the little shuttle train from Saxmundham, lighting up my ginseng cigarette and taking in bands like Tangerine Dream, accompanied by a friend who later became the keyboard player in Chrome Hoof.  Suffolk’s like that.

My companion that December night at the LCR was a new boyfriend. We’d gotten together because his lapel badge had the cover of Unknown Pleasures on it. It was that simple. His big brother gave us a lift with his Fiancée. I remember how grown up she seemed with her neat perm and her tan and her big, padded shoulders. My shoulders were pretty big too in my boned, black, Victorian jacket, worn over an emerald green ball gown, hair also permed but bright pink. We didn’t click.

My little sister was into the newer pop: Human League, Spandau Ballet and Simple Minds, and I remember liking it – albeit reluctantly.

We were quite near the front when they started. I’d had to take my jacket off because of the heat. I must have seen Jim Kerr before on Top of the Pops. I’d been struck by his eyeliner and the way he slouch-danced his way through songs – holding his floppy bob out of his eyes as he swung about. I loved his black and white-ness; white vest and black baggy trousers, white skin and black hair. And in the flesh...they were all fantastic. It was fantastic. I realised I knew most of the words. I was swept up and away by lots of sweaty people, getting stamped on, and I even stopped worrying if my hair had gone flat. For a moment. When the lights came up after the gig I realised I’d been standing on my jacket the whole time. I realise now that I copied his look for a few years. It wasn’t so much a crush as a gentle push towards what I'd already been headed to. And that’s it. That's pretty much the presiding memory.

Because it’s difficult to remember gigs isn’t it? It’s more about remembering what you were doing generally, at that time in your life; who were you seeing, what you were wearing and how exciting it felt to be away from your cosy sitting room in a Lowestoft suburb.

Unless, of course, something happened - like a flamethrower going wrong, or the electricity cutting out, or the support band turning out to be the best thing you’ve ever heard or the lead singer sitting on a stool all evening with her leg in plaster - just some of the scenarios I’ve been offered over the past year while running the wonderful UEA Gig History project.

On December 3rd 2016, UEA decided to mark the 40th anniversary of the cancellation of the Sex Pistols with a website to celebrate all the bands we hadn't cancelled from 1963 onwards. I’d been working there a while. My colleagues knew I had a few musical connections and wore far too much eyeliner for a woman my age (see Jim Kerr), so I was offered the task of contacting a few alumni and inviting them to tell the world about their favourite gigs at UEA. I was delighted by the brave and swift responses I received. First off was UEA’s very own VC David Richardson, who wrote about his passion for The Clash and shared a Back in the Day photo of himself swigging cider at a Clash gig. This very much set the tone.

Gavin Hudson from UEA’s Union provided me with a copy of an 84 page word document he’d compiled, listing gigs from 1963 onwards. He’d also scanned in hundreds of listings, posters, contracts and memorabilia, and gave me a copy of them on a hard drive.

I felt a bit overwhelmed. So many bands, so many years. How could I possibly do justice to this amazing history? Then a colleague whispered two words to me: "Have fun."

And I realised that I was allowed to play.

I tried reasonably hard to stick to a month by month content plan: these posters would be for the April backroom, those photos would do for a photo booth, and perhaps we could simply play a few Youtube clips while people enjoyed perusing the enormous gig list with a glass of sherry. Simple.

@UEAgighistory quickly picked up a student photographer from the early ‘80s. Trevor Benbrook had been allowed exclusive access to gigs by Nick Rayns and he’d begun to develop them. A photo of a very young Simon le Bon quickly went viral and was noticed by Duran Duran themselves. Slowly but surely ex-UEA and local music types started to notice the project. Beautiful black and white shots of Ian Dury and Gang of Four were sent in by Tim Richards; ex-printroom staff who’d put together handmade posters and tickets began to respond (and reconnect with each other) in the most joyful way. It seemed every listing had a story. I’d tweet out something about Radiohead but someone else would remember the band way down the list. One band – the Red Guitars – got in touch and wrote a blog about being sandwiched between The Cult and Prefab Sprout.

Delightful, late night shoutouts and rambling, hilarious conversation meant I lost several evenings of my life in those early months of the project. “Obscure claims to fame” was a particularly memorable moment – including stories about hiding Bob Geldof’s trousers and taking tea with The Enid.

My slightly more restrained contributions to the alumni newsletter also attracted a number of very early students who offered up evocative memories of the early folk scene in the area, as well as some brilliant ticket stubs (Captain Beefheart anyone?) and psychedelic posters.

The archive was growing.

The summer brought to fruition an idea I’d had of hosting a Fantasy Festival on the website, complete with psychedelic arena, memory tent, comedy corner and folk club plus a playlist of favourite gigs by local reviewers from a Norwich listings magazine. How could we possibly follow that?

Late September brought notice of an academic discussion being planned by a UEA Professor of Punk - George McKay’s Punk in the Provinces marked the 40th anniversary of the Sex Pistols playing in Cromer, and UEA Gig History was cordially invited.

Too many years in the UEA events department meant that my initial instinct was to make a leaflet. But this was no ordinary leaflet. I decided to put my MA in scriptwriting to good use and attempted to tell the story of the project on the back of an A2 blow up print of Ian Dury. Perhaps more successful was the decision to simply print the gig list. I used some favourite images on the cover and got a few copies to press. We’d give them out at Punk in the Provinces and that would be that.

As I write, five days after the event, word is spreading and requests are coming in via email and Twitter for a copy of The Gig List 1963-2017. We’re already considering a reprint.

I listened to New Gold Dream on Spotify the other day - OK, and a bit of Tangerine Dream (don't tell anyone), and loved them as much as ever. We’ve all got everything now, haven’t we – old and new, immediate and in wonderful quality. But vinyl’s come back. And cassette tapes. And we will always appreciate live music and a list. We music lovers are very like that.