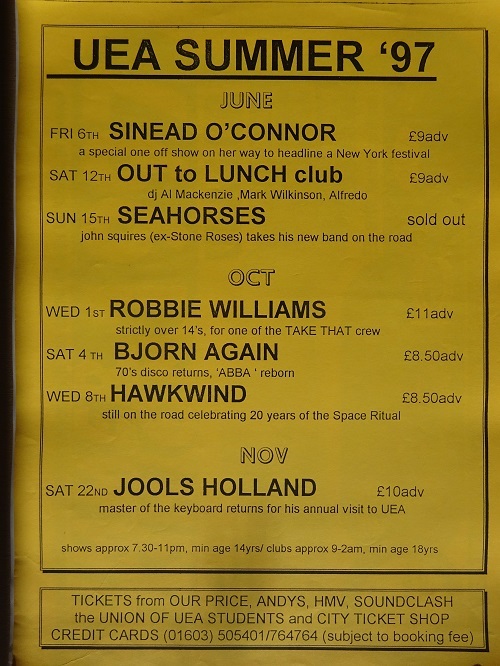 It might not bear comparison - in the annals of pop history - with the furore that greeted the Sex Pistols’ non-appearance in 1976, but it is surely among the most famous gigs that actually happened at the University.

He had stormed out of Take That two years earlier, gone on a long and headline-grabbing bender, and hung out with Oasis and other rock bad boys, before releasing his first solo album, co-written with Guy Chambers. And UEA was the first night of the tour that was to promote the record.

It was probably wise of me to stick with my day job: teaching politics, where things are so much more reliably predictable.

The LCR was packed and the atmosphere one of barely suppressed excitement. There were lots of Take That fans, among them winners of a tabloid competition for tickets to the show. The lucky pair came, as chance would have it, from Robbie’s hometown of Stoke.

I was there too, not as a devoted Robbie fan, although I remember laughing at his antics on the Big Breakfast, but to review the show for The Times. I’d been freelancing for the paper since the early 1990s, and the Williams event was one of the most memorable I covered. Not as much fun as Salt’n’Pepa or as passionate as PJ Harvey, but it had a touch of glittery stardom.  The pleas of ‘Robbie, Robbie’ from the crowd; his command of the stage and of his audience. And there was an edginess, too, as he gave vent to his anger at his media coverage.

It was an easy gig to review – trying to find something interesting to say about Embrace was a lot harder. The only difficult thing was reading my deathless prose over the phone at 2.00am to a bored copy-taker (‘is there much more of this?’, she would ask). It may have been simple to capture the night, but I still got it spectacularly wrong. I praised his upbeat songs, and was dismissive of his ballads, one of which was, of course, ‘Angels’  - one of the biggest selling records of the decade that was also voted in 2005 the best song of the previous 25 years. It was probably wise of me to stick with my day job: teaching politics, where things are so much more reliably predictable.