WHY HANGING OUT DOESN'T ALWAYS MEAN THAT YOU'RE BEST FRIENDS

The Bluetones: a trilogy of UEA gigs 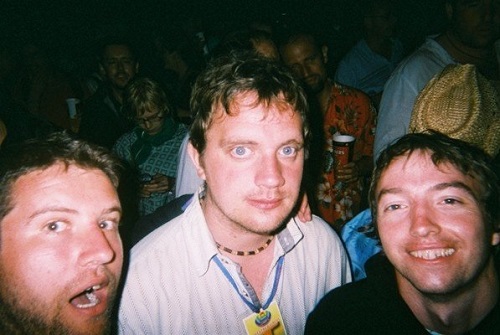 "Mark Morriss is an underrated writer of love songs and this was one of those few, perfect moments; two nineteen year olds in love, going to gigs. We both bought t-shirts at the merch stand and walked home, buzzing and tingling after a night with The Bluetones."

My favourite thing about my first year at university was going out to watch bands. My early gig going days with my friends from school involved persuading someone’s mum or dad to drive us to Hull or Sheffield, the nearest towns the indie bands we liked came to. Now that I was in Norwich I could just wander down to the venue in five minutes without the need of a bored parent waiting outside in their car as we arrived, drenched in sweat from the mosh pit as the windows were subtly wound down. One band I was really excited about queuing up to buy their ticket at the LCR box office was The Bluetones. They were never one of my favourite bands but there’s something about them I’ve always loved, an indie spirit, good lyrics, likeable, memorable choruses. A few of my new uni friends were keen to come along so we all went along to the student bar then went up the steps to the LCR to watch The Bluetones. But a strange thing happened. Instead of them heading straight to the front, they were happy to mill around at the back. I’d never stood at the back for a gig before. I wasn’t keen. I wanted to push forward so I could watch the gig within touching distance of the stage and speakers. After a few songs standing with my friends I realised I had to break away from these people. I was soon right at the front with people in sweaty t-shirts jumping up and down to the familiar sound of The Bluetones songs.

In my second year at university The Bluetones were back in Norwich, this time at the slightly smaller Waterfront venue. I didn’t go with those friends I’d been to the LCR gig with. This time I was going out with a girl who was a big Bluetones fan. This was the first time I’d ever gone to a gig with a girl; it was a big deal for me. We stood a few rows back, her in front of me, my arms round her waist, while The Bluetones sang their songs. Mark Morriss is an underrated writer of love songs and this was one of those few, perfect moments; two nineteen year olds in love, going to gigs. We both bought t-shirts at the merch stand and walked home, buzzing and tingling after a night with The Bluetones.

The next time The Bluetones were back in town was two years later. I was in my final year at university. I’d spent my third year abroad, so when I came back a lot of my friends had graduated and left town. My girlfriend had moved to New Zealand because that’s what happens sometimes. I loved my first two years at university but was starting to struggle a bit in this final year. The realities of grown up life were weighing heavy. I was applying for jobs and my prospects were unpromising, largely because I’d chosen a degree that I now had no interest in. The Bluetones had a new album out. Luxembourg. I hadn’t heard it but I went along to their gig at Norwich Arts Centre. The mosh pits of the LCR had disappeared, the band were getting older and so were its fans. It felt odd being there on my own. All the novelties of living within walking distance from gigs had worn off and music’s ability to lose yourself to the moment hadn’t quite kicked in and I just stood there on my own. Sometimes life is singing along the choruses of your favourite songs. Sometimes it’s watching a band on tour playing songs from their new album that they know no-one’s bought. I worried that this was what getting older was like.

A couple of years ago Mark Morriss, The Bluetones lead singer was back in Norwich. It was fifteen years after that first gig. I hadn’t bought a ticket but as I sat in my flat listening to Bluetones songs on shuffle I had a few beers and decided to go along. Although the gig was back in the prestigious Waterfront it was in the bar rather than the main room. The venues were getting smaller and smaller. I got there and there were about thirty other people who looked like they’d all been to at least one of the trilogy of Bluetones Norwich gigs. Mark looked like he was enjoying playing the familiar songs, as well as some new stuff. He played the songs on his acoustic guitar and it felt special; a gathering of like-minded people appreciating the person who wrote some of their favourite songs, who hopefully looking back will realise he’s had it pretty good. If I had to list my five favourite bands I wouldn’t mention The Bluetones. But sometimes the people you like spending time with aren’t your best friends. Sometimes it’s the quiet, unassuming, loyal, likeable people who play a vital role in your life without you necessarily realising it. I realised that unlike those other gigs, I was much more settled now. I was happy to stand at the back and experience things without needing to throw myself around or look for something extra. Hopefully there’ll be more chances to see The Bluetones and Mark Morriss again in Norwich. I still haven’t heard their Luxembourg album though.