MEMORIES OF A CLASH FAN 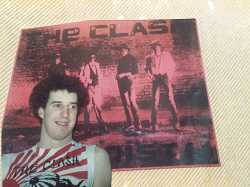 But here goes. So, yes, I am a microbial biochemist with an active research group researching bacterial bioenergetics.

And, yes, I am the Vice-Chancellor of the University of East Anglia. But I’m also someone who has a long-standing love for punk music.

None of the three facts above are contradictory. But they don’t fit the stereotypes. The fact is that I’m very proud of all those aspects of my life. So why the need to confess to being a punk aficionado now?

The answer is that life has a strange habit of coming full circle. Forty years ago the Sex Pistols were due to play the opening night of their “Anarchy in the UK” tour at UEA. The Vice-Chancellor at the time cancelled that UEA gig in 1976 on safety grounds and, in his guest blog, Professor John Street examines the impact of that decision on the mythology of the Sex Pistols and punk in the UK. It’s fascinating stuff and it is part of our cultural history.

This is both an acknowledgement and something of a celebration of that anniversary. I’ve personally written to John Lydon, back then known to the tabloid press as Johnny Rotten, to note the UEA anniversary and to say that he’s always welcome to visit this university.

Why? Because I think John Lydon understands the power of education in its broadest sense and, from a personal perspective, I really am grateful for what punk contributed to my life. As a teenager growing up in Newcastle and the North East in the 1970s, it was quite an insular environment.

It was also an environment that was sometimes violent and abusive, and that was true up and down the country. Some people were openly racist. As a kid I went to see Newcastle United play and the football culture at the time was pretty violent and abusive. And you were normalised to that at the age of 12, 13 or 14.

Then this music came along and I liked what I heard. The music sounded angry and confrontational and that was what initially appealed to me. But if you really paid attention and listened to the lyrics many of them were calling for change, putting politics back into music, addressing difficult societal issues such as racial intolerance, poverty and violence. I honestly believe that punk music taught me a lot.

I was lucky enough to see a lot of bands like The Clash, Buzzcocks, Penetration, and The Jam in their heyday, and for me it was really about the lyrics and what they were saying about the way our world was.

I think that music genuinely played a part in me developing from someone who wasn’t doing that well at school and was probably destined to leave at 16, to someone who went on to sixth form and then university.

I now know that I’m dyslexic, but at school I struggled to write and struggled with essays - but music and lyrics encouraged my creative side. As a teenager I wrote songs and poetry, played the guitar, and I’ve always enjoyed that creative aspect. To this day I still know the lyrics and the chords to the songs I wrote when I was 16.

When I was an undergraduate at Keele, in 1984 I hitchhiked around the country with friends to follow The Clash on tour. I hasten to add that’s really not something I’d recommend to today’s students. When I was doing my PhD at Birmingham I used to busk and play songs by The Clash, Echo and the Bunnymen, and The Jam.

I’ve actively kept an interest in music. I still play the guitar and my tastes are pretty eclectic. At UEA I’ve seen Stiff Little Fingers, The Damned, The Stranglers and the Blockheads with my son and daughter, so the music has lasted throughout my life and really has come full circle.

So if you do bump into me in the vinyl shops around Norwich looking for old punk records don’t be surprised. I was delighted to pick up a Dead Kennedys record recently. ”Holiday in Cambodia.” Now that’s a punk classic.