Isopycnal mixing at mid-depth (~500m) in the Southern Ocean

The history of HPC at UEA stretches back to the mid 1990s.

The HPC provision has always been specified to be a general purpose facility for research that requires compute intensive resources. It has been used to meet a wide variety of research needs within our Science faculties, and is now attracting users from across the University from the Medical School to Economics.

Over the years HPC provision has been through several iterations.  It has grown from a handful of Unix workstations serving a dozen applications using less than 1Gb RAM, and 100Gb storage to the Linux cluster of today with over 3000 CPU cores, with over 6Tb or RAM and more than 100Tb of storage, providing approximately 350 applications. 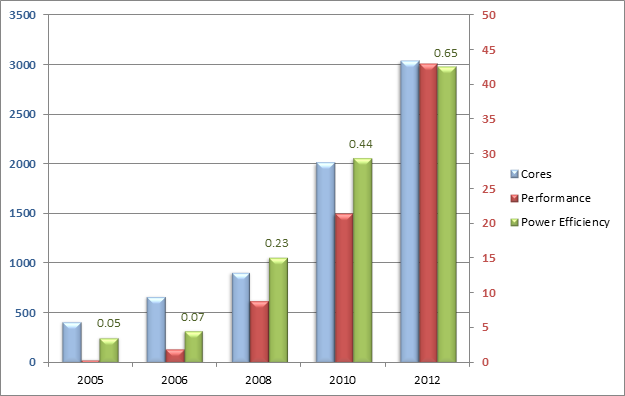 Unix provision at UEA started in the early 1990s with a "farm" of Dec Alpha machines.

In June 1998 new hardware was installed - cpca12 -  Unix AlphaServer DS20 - dual 533MHz processor with 2Gb memory.  A job distribution system was implemented (running DQS).  It ran 4 batch queues and 4 interactive slots.  Overflow batch queues ran on the newer of the stand alone alpha farm machines (cpca4, 5, 6, and 7).  At the time there were approximately 20 Unix machines scattered around the science schools.

Over the next few years further DS20s were added to the pool.  Storage was on local disks, backed up to tape once a week.

Our first Linux beowulf cluster was intended as a proof of concept - a step into the quickly emerging world of Linux HPC clusters.

It was a small cluster installed by Compusys.  All machines were 32 bit  machines, and it was connected with both Ethernet and Myrinet networks.

Storage was provided by local disk on the master node served to the slave nodes.

Cluster1 was our first large scale production Linux cluster. It was a ClusterVision installation commissioned in spring 2005.  Between April 2004 and March 2006, the project was funded as part of the university's HEFCE SRIF-2 (Research Infrastructure Funding) project.

The Myrinet portion was upgraded to 64 nodes in summer 2008.

Cluster1 was decommissioned in 2010.

Funded by HEFCE SRIF3, the Dell and ClusterVision installation began in the 1st quarter of 2008, coming online to our users in the 3rd quarter.

Hardware - The cluster was a Dell and ClusterVision installation. Access was via a login node, and jobs were distributed to the slave nodes using SGE 6.1.

Building on the successful provision of High Performance Computing resources to the research community at UEA for a number of years, the Research Computing Services tendered for a new High Performance Computing Cluster to be installed in 2010 and looked to develop an ongoing partnership with a HPC provider. This included meeting a number of challenges: Provide effective and reliable HPC resource fitting the research communities requirements Sustainable HPC Making HPC more accessible

A partnership was formed with Viglen Ltd, who share the goals of developing High Performance Computing with us, and were keen  to engage in developing a true collaborative partnership to take Research Computing at UEA into the future.

The new cluster was funded by ISD and was a major advance on the existing resource, providing a significant increase in both core count and performance.

A competition was launched to name the cluster. Toby Richmond's (MAC) suggestion of ‘Grace' was selected from almost 800 entries. Toby said: "I thought it would be a good idea to recognise the contribution of female IT pioneers like Grace Hopper". The judges also noted the name provides a relevant and appropriate acronym in ‘Greener Research Computing Environment'.

Over the following years there was an ongoing increase in capacity in grace, encompassing increased core count for both sequential and parallel computing, faster processors, and more capacity for large memory computing.  Storage capacity (backed  up, scratch, and archive) grew substantially to over 100Tb.

In 2013 phase 3, the large memory machine count was increased, the addition of 68 compute nodes providing a total of 1088 Sandybride cores.  Once again these nodes were based on the Intel Xeon E5-2670 2.60GHz 8 core processors, providing each node with 16 computation slots, and 32GB of RAM.  Additional Infiniband infrastructure wereincluded, with the separation of nodes as:

The upgrade took Grace up to more than 300 computational nodes, increasing the core count up to 4148 cores, with a theoretical peak performance of nearly 65TFlops.  The new hardware was installed in the UEA Data Centre 1, separate from the majority of the existing Grace hardware which is located in UEA Data Centre 2, which helped improve service availability and resilience.

In 2015 we tendered for a new HPC partner, after our previous agreement reached the end of the four year term. We made a partnership with OCF, specialists in High Performance Computing in HEI and research institutes in the UK, along with Fujitsu as a hardware technology partner.

The first phase created the new hpc.uea.ac.uk cluster with an additional 98 nodes and 1760 computational cores. This included standard nodes, Infiniband parallel nodes and further GPU resource.  Based on the same Operating System and Platform LSF scheduler as Grace, the new cluster had a refreshed software stack with newer versions of the OS and scheduler.  It provided a familiar working environment with the intention over time to newer existing Grace hardware to this new cluster.

In early 2017 we added more upgrades