The Sebald Lecture is given annually on an aspect of literature in translation. It's named after W.G. Sebald, who set up the BCLT in 1989.

Sebald - ‘Max’ - was a German writer who opted to live in the UK and continue writing in German. His novels and essays include The Rings of Saturn, Austerlitz and On the Natural History of Destruction. They established him as a leading writer of the 20th century.

Watch or listen to past Sebald Lectures

The 2022 Sebald Lecture on Literary Translation was given by Lydia Davis on Wednesday 1st June 2022, Online. 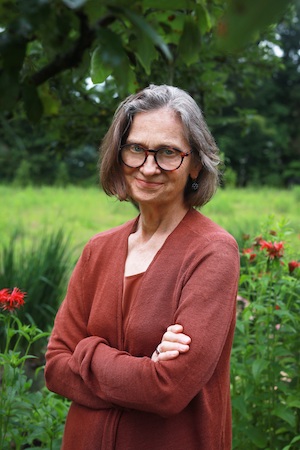 The 2022 Sebald Lecture on literary translation was given by prize-winning short story writer, novelist and translator Lydia Davis, who, in conversation with Philip Wilson (UEA), reflected back over her distinguished career as a translator from French, and discussed her recent collection Essays Two, about translation and foreign language-learning.

The Sebald Lecture 2022 is presented by the British Centre for Literary Translation (BCLT), in association with the National Centre for Writing and the British Library.

The event was livestreamed and included a live question and answer session.

Lydia Davis is an American short story writer, novelist, essayist, and translator from French and other languages. In 1999 she was named a Chevalier of the Order of Arts and Letters by the French government for her fiction and her translations of writers such as Maurice Blanchot, Michel Leiris and Pierre-Jean Jouve.

Her versions of Marcel Proust’s Swann’s Way (2003) and Flaubert’s Madame Bovary (2010) were published to great critical acclaim, and in 2013 she was awarded the Man Booker International Prize. She is the author of a novel, The End of the Story (1995), and several volumes of stories, including Varieties of Disturbance, a National Book Award finalist, and Can’t and Won’t, a New York Times bestseller. In 2009 her stories were brought together in one volume, The Collected Stories of Lydia Davis; more recently, her non-fiction has been published in two collections, Essays One (2019) and Essays Two (2021). Lydia Davis is professor emerita at SUNY Albany.

The Sebald Lecture is given annually on an aspect of literature in translation and is named after W.G. Sebald who set up BCLT in 1989. ‘Max’ was a German writer who opted to live in the UK and continue writing in German. His novels and essays include The Rings of Saturn, Austerlitz and On the Natural History of Destruction, and they established him as a leading writer of the 20th century.

In Praise of Echo

In partnership with the British Library and the National Centre for Writing, the 2021 BCLT Sebald Lecture took place online on Wednesday 2 June 2021.

In this lecture, Jhumpa Lahiri reflected on the myth of Echo and Narcissus in Ovid’s Metamorphoses in light of her own practice as a translator, self-translator and teacher of literary translation.

Considering metamorphosis as a kind of translation, Lahiri held up the fate of Echo, in particular, as a metaphor for the translation process that has much to teach us about identity, originality and finding a voice. She discussed her own transformations – from novelist to translator, from a writer of English to a writer of Italian – and emphasised the value of translation to any literary writer.

Jhumpa Lahiri won the Pulitzer Prize for Fiction in 2000 for her debut short story collection The Interpreter of Maladies. Since then she has published in English a further story collection (Unaccustomed Earth, 2008) and two novels: The Namesake (2003) and The Lowland (2013, shortlisted for the Man Booker Prize). In 2012 she immersed herself in the Italian language and moved to Italy, documenting the process in her Italian-language memoir In altre parole (translated by Ann Goldstein as In Other Words, 2016). She has published her own translations from the Italian of two novels by Domenico Starnone – Ties (2017) and Trick (2018), the latter awarded the 2020 John Florio Prize by the UK Society of Authors.

Jhumpa Lahiri is Professor of Creative Writing at Princeton University, and divides her time between Princeton and Rome.

The Myths and Mysteries of Literary Translation

In partnership with the British Library and the National Centre for Writing, the 2020 BCLT Sebald Lecture took place online on Monday 29 June 2020.

Professor David Bellos teaches French and Comparative Literature at Princeton University, where he also directs the Program in Translation and Intercultural Communication.

A prize-winning translator of works by Georges Perec, Ismail Kadare and others, he has written an acclaimed introduction to translation, Is That A Fish in Your Ear? The Amazing Adventure of Translation (Penguin, 2012). His biography of Perec won the Prix Goncourt de la biographie in 1994, and his latest book is a study of Victor Hugo’s masterpiece, Les Misérables.

Translating the Odyssey Again: Why and How?

Why translate the Odyssey into English yet again, when there have already been almost seventy translations into our language?

Emily Wilson discussed her working process and goals with this project, from questions of verse form and metre, pacing, style, word choice to narrative perspective, focalization and point of view. She discussed her vision of this complex, magical, moving and absorbing text about identity, hospitality and the meanings of home.

Emily Wilson is Professor of Classical Studies and Chair of the Program in Comparative Literature and Literary Theory at the University of Pennsylvania. She grew up in Oxford, UK, and has a BA in Classics (Lit. Hum) from Balliol College Oxford and an M. Phil. in English literature from Corpus Christi College Oxford, and a Ph.D. in Classics and Comparative Literature from Yale. Her books include a study of tragedy and “overliving”, a book on the death of Socrates and its various cultural receptions, and a literary biography of Seneca. Her verse translations include Six Tragedies of Seneca, four tragedies of Euripides, and a forthcoming translation of Sophocles’ Oedipus Tyrannos, as well as The Odyssey; she is working on a new translation of the Iliad.

In What Language Does Rain Fall Over Tormented Cities? The Weather Underground in The Ministry of Utmost Happiness

The 2018 W.G. Sebald Lecture on literary translation was given by novelist and activist Arundhati Roy on Tuesday 5 June 2018 at the British Library Conference Centre, London.

Novelist and activist Arundhati Roy won the Booker Prize in 1997 with The God of Small Things, which has been translated into more than 40 languages. Since then Roy has published several works of non-fiction, including The Algebra of Infinite Justice, Listening to Grasshoppers and Broken Republic. Her second novel, The Ministry of Utmost Happiness, was longlisted for the Man Booker Prize for Fiction in 2017 and described by the judges as “a rich and vital book” that has “remarkable scale” and “extraordinary style and intelligence”.

The 2017 Sebald Lecture on literary translation, sponsored by the British Centre for Literary Translation at UEA, was given by Northern Irish poet Michael Longley CBE on Monday 20th February at the British Library, London.

In this lecture, Michael read and commented on his translations from Latin and Greek. He began with his youthful versions from Sextus Propertius and progressed to later poems derived from Ovid’s Metamorphoses and Homer’s Iliad and Odyssey, taking in Sappho and Tibullus on the way.

One of Britain’s finest poets, Michael Longley has received many awards for his lyrical poems about love, death, memory, history and nature, published over more than fifty years.

This event was supported by The British Library, Arts Council England and Writers' Centre Norwich.

The Language of the Heart

Award-winning writer and performer A.L. Kennedy explores translating human experience across the inevitable boundaries between individuals and considers the forces in play which make that more and less possible. The 2015 Sebald Lecture took place on Monday 16 February 2015 at the British Library Conference Centre, London.

A.L. Kennedy was born in Dundee in 1965. She is the author of 15 books, 6 novels, 6 short story collections and 3 works of non-fiction. She is a Fellow of the Royal Society of Arts and a Fellow of the Royal Society of Literature. All the Rage, a collection of short stories, was published by Jonathan Cape in spring 2014. She is also a dramatist of the stage, radio, TV and film. She writes for a number of UK and overseas publications and blogged for The Guardian.

The lecture explored Margaret Atwood's adventures with translations in 44 languages over 45 years. The event was introduced by Kristian Jensen, Head of Arts and Humanities at the British Library, and chaired by Naomi Alderman.

Margaret Atwood is the author of more than forty books of fiction, poetry, and critical essays. Her latest novel, MaddAddam is the follow-up to The Year of the Flood (2009) and her 2003 Giller Prize winner, Oryx and Crake. Other recent publications include The Door, a volume of poetry (2007), Payback: Debt and the Shadow Side of Wealth (2008) and In Other Worlds: SF and the Human Imagination (2011).

Additional titles include the 2000 Booker Prize-winning The Blind Assassin; Alias Grace, which won the Giller Prize in Canada and the Premio Mondello in Italy; The Robber Bride, Cat’s Eye, The Handmaid’s Tale, and The Penelopiad. Margaret Atwood lives in Toronto with writer Graeme Gibson.

Boris Akunin is one of the most widely read authors in Russia, and has been compared to Gogol, Tolstoy and Arthur Conan Doyle. His best-selling detective novels are translated into English by Andrew Bromfield. But in his previous life, Boris Akunin was Grigory Chkhartishvili, a translator of Japanese literature into Russian.

In his lecture, he talked about his love for translating, how translating both helped and hindered his work as a writer, and why he misses it now.

The evening also included include readings and presentations of the annual Translation Prizes administered by the Society of Authors.

Making The Crossing: the Poet as Translator

Sean O’Brien is a poet, critic, broadcaster, anthologist and editor. He grew up in Hull and lives in Newcastle upon Tyne. He is Professor of Creative Writing at Newcastle University, Fellow of the Royal Society of Literature and 2007 recipient of the Northern Rock Foundation Writer’s Award.

O’Brien's selected poems, Cousin Coat: Selected Poems 1976-2001 was published in 2002 and his new verse version of Dante’s Inferno in 2006. His first six individual poetry collections have all won awards, most recently The Drowned Book, which won both the 2007 Forward and T S Eliot Prizes, the first time a book has won both awards. A book of short stories, The Silence Room, was published in 2008; Afterlife, his first novel, and Night Train, a collaborative work of poetry and drawings with Northumberland artist Birtley Aris, were published in 2009. His new poetry collection, November, was a Poetry Book Society Choice and shortlisted for the 2011 T S Eliot Prize and for the Forward Prize.

The Sebald Lecture was given by Will Self on 11 January 2010 at Kings Place, London.

Listen to the lecture on Soundcloud
An edited version of the text was published in the Times Literary Supplement January 22 2010 No 5573.