Violeta Novakovic, Samantha Viljoen and Georgina Yallop discovered, there’s more to the tame old teabag than meets the eyes. And their research project featured on BBC’s ‘War on Plastic with Hugh and Anita – The Fight Goes On’.

100 million cups of tea are drunk in the UK each day. Relaying a message that betters our understanding of what’s in our tea is key. 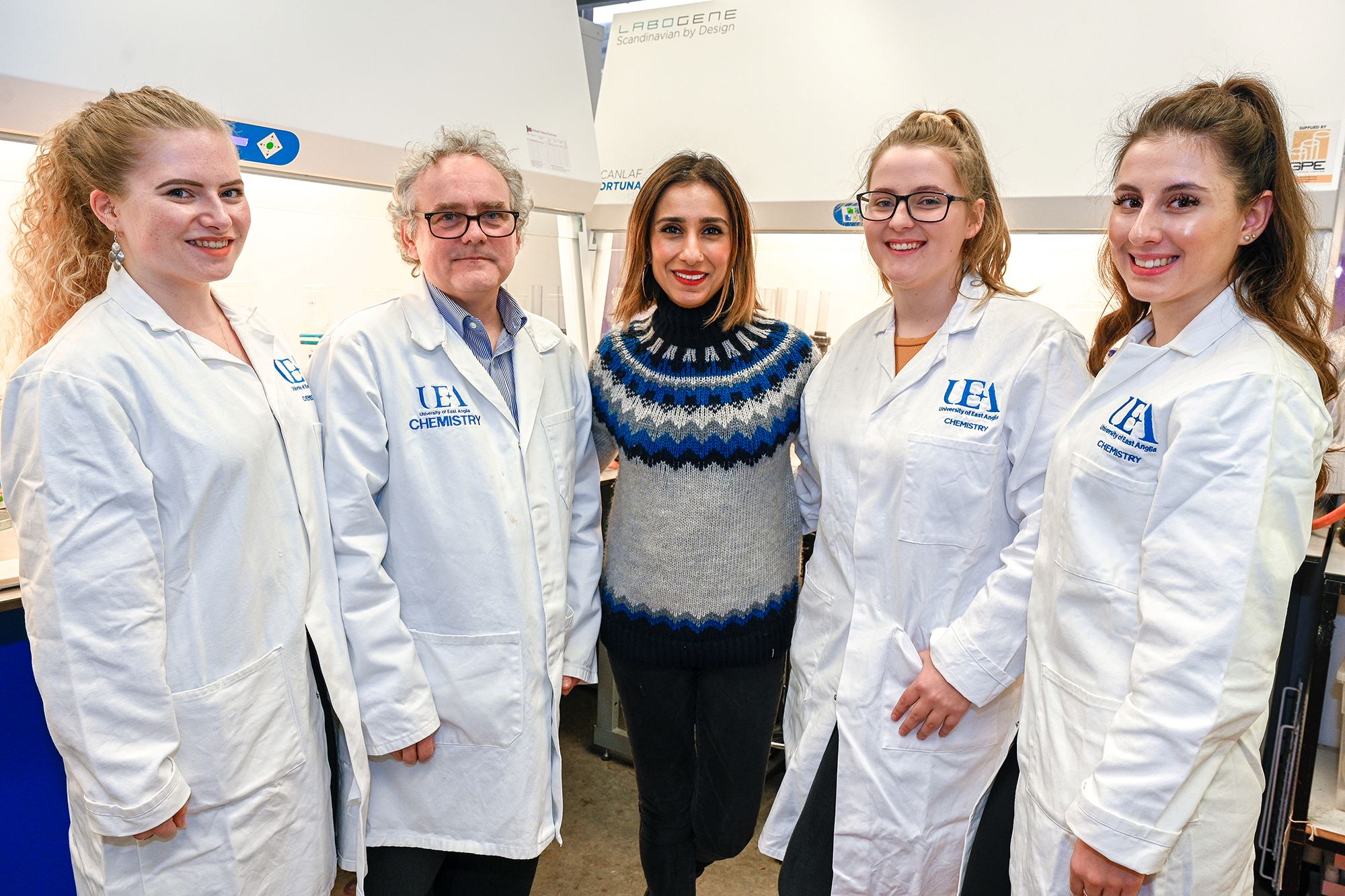 What prompted the research?

Initially, it was a paper produced by a Canadian research team stating that teabags produce billions of microplastics each time one is used to make a cup of tea. As a nation of tea drinkers this of course sparked our interest!

The production company which made the BBC documentary ‘War on Plastics’ thought it would be interesting to see if the big brands in the UK also contained plastic in their teabags and if they did how many microplastics were produced. So they contacted Dr Andrew Mayes at UEA, who was our project supervisor and he asked us if we would be interested in carrying out the research. Of course we said yes, and we also ended up carrying the research on throughout the year for our Masters year research projects.

Can you summarise how it works?

We had to determine if the teabags contained any plastic at all. To do this we used IR spectroscopy and produced spectra for each of the teabags. The spectrum was then compared to known plastic spectra and a match in peaks confirmed the presence of plastic. For some of the teabags the presence of a paper-like material masked the peaks required to identify the plastic in the bag so we used a copper ammonium solution to dissolve the paper-like material from the bags, leaving the plastic skeleton (seen in the show being removed from the blue solution). We were also able to compare the weights of the plastic skeletons to the original tea bags in order to determine the percentage of plastic which was present in the tea bags.

The best brand of teabags is Pukka as they are completely plastic free. They achieve this as the teabags are stitched together, where all other brands use the process of heat sealing. Morrisons ‘The Best’ range proved to be the most disappointing, containing 99% nylon. This was closely followed by Teavana which was 97% PET. As these plastics are robust they weren’t the worst for microplastic leaching in the tea samples. The teabag which leached the most particles was a tea bag from Tetley, which contained 30% polypropylene.

What impact do microplastics particles have on consumers and the wider environment?

The contamination of the terrestrial, freshwater, and marine biosphere by microplastics is now widely recognised as one of the world’s greatest pollution threats. Yet, the impact of microplastics in these environments remains largely unexplored. In recent years an overwhelming amount of evidence has been produced indicating the negative impact of plastic, and subsequently microplastics, on marine organisms. As of yet the impact on consumers has not been investigated.

How do teabags compare to other microplastics offenders?

On the whole, teabags are relatively good as many of the big brands such as PG tips have committed to producing teabags containing a form of plastic called PLA (Polylactic Acid) which is produced from renewable resources such as plants. This is able to  decompose at high temperatures and tea bags containing this plastic are able to go in household food waste bins to be industrially composted. This does not negate the fact that for years teabags contained plastics that are unable to be recycled, increasing the use of single-use plastic waste.

Why is this research important?

Plastic has become an integral part of today’s society and has been incorporated into many different products. As a result, the quantity of plastic pollution in the environment has  increased. The unique aspect of plastic being in teabags is that generally the public was unaware of its presence, which led to the improper disposal of the tea bags. This in turn increased plastic pollution. This research was able to highlight the importance of uncovering the ‘secret plastics’ in common household items, but also brings to the foreground the presence of that microplastic and its potential impact.

Why do you think the research prompted wider interest, particularly for the BBC show?

Our specific look into the presence of plastic in teabags gained wider interest because as a nation approximately 100 million cups of tea are drunk each day. Tea is an intrinsic part of our society and relaying a message that betters our understanding of what’s in our tea is key.

Since graduating Violeta has started on the BT graduate scheme in applied research. Her work involves  leveraging partnerships with universities and other companies to conduct unique technical research in business critical areas. Her role also provides strategic direction on key topics that help BT make the right investment decisions and propose options for the future. Georgina has got a job working as a QC Validation Analyst, working for the same company she carried out her Year in Industry with (Bard Pharmaceuticals). This job involves working in the lab, carrying out validation work for the methods being developed for use in Quality Control testing within the company. And Samantha is starting a PhD is focusing on the threat microplastics pose to the terrestrial biosphere.