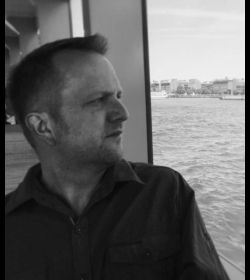 Edward Parnell, MA in Creative Writing, on his new book and how he’s been influenced by the Norfolk landscape

Edward Parnell graduated from the MA in Creative Writing in 2007. Since then he’s published two books – a novel, The Listeners, that he started during his time at UEA, and a new work of narrative non-fiction, Ghostland, published this month.

Edward has lived in Norfolk for the past 20 years and starts by explaining how the landscape of his home county has influenced the two books he’s written.

“The Listeners was borne out of my memories of my grandmother’s house, which was in a tiny village near Swaffham. I grew up in the barren, treeless Lincolnshire fens, but at my grandmother’s I could go and wander off all day in the woods, surrounded by nature. In that way I suppose I was quite like the protagonist in that novel [in The Listeners the nature-loving William Abrehart spends most of his time exploring the local woods and meadows. Read an excerpt]. The place was full of odd stories and local village legends – there was said to be a bottomless pit, for instance, called the Devil’s Pit – and these things obviously fed into my childhood imagination and remained with me into adulthood.

“Ghostland came about after I wrote a blog post about M. R. James [a famed ghost story writer working at the beginning of the 20th century] and a visit I took to the place where he grew up, in Suffolk. A commissioning editor at Harper Collins read it and emailed me to ask if I’d ever thought about writing a book on the subject. So of course I went and met him and we discovered we had a shared love of 1970s horror films. So Ghostland came out of that, though it became something much more personal that the ideas we first discussed. It was strange really, as at that point I was toying with ideas for another novel and hadn’t set out to write a non-fiction book at all.”

You started at UEA in 2006. What were you working on then?

When I applied to the course I had written a couple of short fragments of what was to become The Listeners. It had been in my head for years and was the novel I really wanted to write. But I was also a bit lazy and unmotivated, and really needed concrete deadlines and the thought that other people were going to critique it to cajole me along. And I think that’s really what the UEA course did for me. It gave me focus and meant I was compelled to write each day, to form a habit. I think that concentrated approach was the only way I was ever going to have a chance of writing a book.

Did you see yourself having a career as a writer?

I must’ve hoped that at some point I’d be a writer – I had given up a full-time job to take up a place on the course, after all. But I think at that point I really just wanted to see if I could actually finish a novel and then see what came from that. I still spend half of my time wondering if I actually can call myself a writer yet. Maybe if I manage a third book I might actually start to believe that I am…

What did you gain from doing the course?

I think the most important thing was a sense of legitimacy. You’re surrounded by supportive, like-minded peers, who give you confidence and make your work seem serious and real. Everyone on the course was keen and full of enthusiasm – and I think we were all buoyed along together by that.

“Looking back, I also wonder whether being in Norwich helped me to write something slightly different. Yes, Norwich is slightly out on a limb, but you’re also in a supportive environment, driven by UEA and the quality of the teaching and the weight of the writers who’ve gone before – as well as by the National Centre for Writing and the city’s UNESCO City of Literature status. Sometimes I think about moving – I periodically crave to live somewhere wild and remote like Shetland, though I’d probably end up birdwatching more than writing – but then I realise that I would miss living close to Norwich, a city that really seems to appreciate its writers.

What happened when you finished the MA?

I’d just completed a rough first draft of The Listeners when the course ended. A few literary agents were interested and wanted me to rewrite it in various ways, but nothing solid ever came from that. Perhaps, I wonder now, I was too quick to send off the manuscript before it was ready. Meanwhile I was working, writing freelance articles and proofreading, and doing the odd spell of longer employment while I continued to work on the book. The Listeners eventually got published in 2014 – after a ridiculous amount of tweaking and re-writing – when it won the Rethink New Novels Prize. The whole path to publication was a bit long-winded and a bit of a struggle, but it felt great that my book was finally coming into the world and wasn’t just going to languish as a Word file on my computer.

Any advice to people thinking of doing the course, or who have just finished it?

Be persistent, I think. All sorts of things get in the way of writing a book. So, if you can, stick at it, no matter how long it takes.

Would you do the course again?

I would, definitely. I never would’ve written my first book had I not have done the course. I’d probably still be in the same job, still thinking about The Listeners and still not writing it. And then, of course, Ghostland wouldn’t have happened – and it’s a book I’m really proud of, a book in which I try to lay to rest my own ghosts…

Ghostland: In Search of a Haunted Country is being published in hardback by William Collins. Buy Edward’s book from: Amazon