As the events of the last few weeks have reinforced once again, the topic of race remains central to American society. In this post, American Studies lecturer and specialist on the history of American comics Frederik Byrn Køhlert, reflects on the history of racial representation in comics and recommends five recent long-form comics about racial relations in the United States. 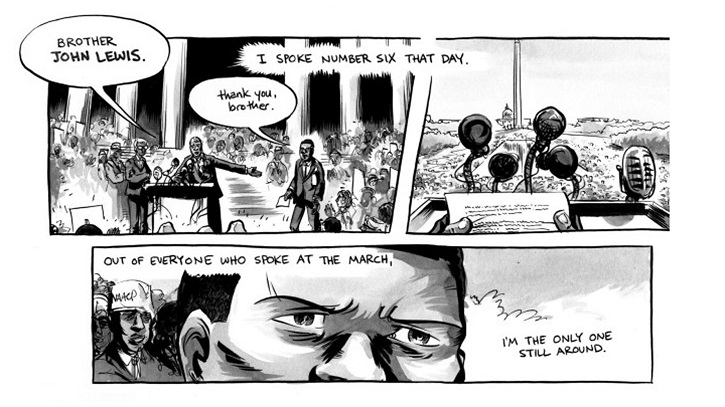 Although comics are often associated with childhood, fantasy, and escapist entertainment, the last few decades have seen a virtual explosion of more mature work, in the form of so-called graphic novels that engage with every topic imaginable, including the always potent topic of race.

Of course, just as the concept of race has been—and remains—central to our culture, it has been part and parcel of comics history since the modern invention of the form in the late nineteenth century. Look through just about any collection of old newspaper comics, for example, and you will find that they are full of the kinds of racial and ethnic stereotypes and caricatures that thankfully make most of us uncomfortable today. Even Mickey Mouse, the very symbol of wholesome American family entertainment, was originally modeled on blackface minstrel performers when he first appeared in the 1920s.

The situation did not exactly get any better later in the century, when jungle comics and World War II-era war comics presented Africans and Japanese enemies in derogatory and offensive ways. Even today, racial and ethnic stereotypes are prevalent in comics and cartoons, and artists regularly get called out for using them. Because of this history, it seems safe to say that not only has comics trafficked in this kind of offensive representation, but their images have played a central role in giving visual shape to the cultural construct of race, by creating and entrenching derogatory ways of seeing and imagining non-white people.

But just as comics art can be used for racist purposes, the form is also flexible enough that these representations can be turned on their head, and alternative stories told. As we watch the current situation in the United States (and elsewhere) unfold, here are five recent long-form comics that deal frankly and directly with the topic of race in America.

March, by John Lewis, Andrew Aydin, and Nate Powell
Lewis is an American congressman and a veteran of the Civil Rights struggle in the 1960s. He marched with Martin Luther King and led the student protests across the South. Part autobiography and part history of the movement, the three-volume March tells a gripping and powerful story about resistance and perseverance in the face of systemic injustice and police brutality.

Incognegro, by Mat Johnson and Warren Pleece
Based on true events, Incognegro tells the story of a black 1930s newspaper reporter who travels from New York City to Mississippi, where he manages to pass as white in order to investigate a series of lynchings. A powerful story about the extensive history of racist violence in the US, and the lasting legacy of white supremacy at the foundation of American society.

Your Black Friend, by Ben Passmore
A hilarious and satirical take on contemporary race relations, Your Black Friend is written as a letter to the kind of clueless white people who either claim to not see race or are busy proving their own wokeness. Passmore has an especially keen eye for the racially tinged micro-aggressions underlying many daily interactions, making Your Black Friend essential reading.

American Born Chinese, by Gene Luen Yang
Although less well known than stereotypes of black people, derogatory portrayals of Asians have an equally long history in comics. Based on Yang’s own childhood experiences, American Born Chinese takes the radical step of depicting the most offensive Chinese stereotype imaginable, showing how its presence haunts and overshadows the main character wherever he goes.

Arab in America by Toufic El Rassi
Another memoir, Arab in America is El Rassi’s story about growing up in America, with a focus on the increased hostility of the post-9/11 years. As El Rassi takes the reader through both his personal experience and the history of American intervention in the Middle East, he shows how the many cultural stereotypes and caricatures of Arabs—including those in comics—have influenced and warped the way he is perceived by white America.