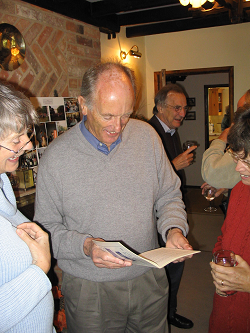 Last month, we were very saddened to learn of Dr Ian Gibson’s death. Ian joined UEA’s School of Biological Sciences in 1965 and taught here for many years. He became Dean of BIO in 1991 and in 1997 was elected as MP for Norwich North. Since his passing, we have received many nice messages from alumni, and we are pleased to be able to present a collection of their memories here.

His time keeping was poor but his knowledge of molecular genetics was awesome and inspirational.

‘Ian Gibson was my project supervisor for my final year project. He was an enormous influence on my decision to continue as a bench scientist. Before my project I was considering a very different career path but working with Ian changed all that! He was also very influential in my choice of research area. Ian believed strongly in fair and equitable access to health and medicines and this has become a guiding principle in much of my work.

We kept in touch over the years and I last heard from him in 2020 when he was talking about writing an article on Science and politics and the big divide.’

‘It was very sad news to hear of Ian’s passing.

I have many fond memories of him and he had, in my observation, a mischievous sense of humour and a sparkle in the eye.

He was of course a great enthusiast for his subject and I thought a very gentle man.  I found him most supportive and he gave me great encouragement on a number of occasions. It was good to have a parliamentarian who understood science and scientific method.’

‘For our final year project, Maudie and I worked together on a new electrophoretic technique for haptoglobin typing of blood samples. The method had only just been published, and by a former U.S. colleague of Ian’s.

Mentioning this project at my interview for a job at the Met. Police Forensic Lab. was more than helpful.  The chief of Bio. there leapt to his feet, waved goodbye to the rest of the panel and whisked me off to his research unit to look at the results of the method he had been trying for the same group.’

'After he entered Parliament, I remember having a conversation with him where I mentioned the blue Tory posters he had in his lab windows when he first arrived at UEA. We laughed and he commented that not many people would remember that.

In these days of tightly designed curricula, Ian met the need for research informed teaching by bringing the latest edition of a research journal into a lecture and talking us through a paper. His time keeping was poor but his knowledge of molecular genetics was awesome and inspirational. In future years it was so good to hear a real scientist in Parliament offering advice on scientific matters.'

'I have two positive recollections about Ian. The Finals genetics paper had a question that read something like "Summarise a recent paper". I did but then needed to catch Ian in the bar to explain that the first use of RNA/DNA hydridisation had just been published in Nature. An hour later, he called me across to his lab to thank me for pointing out the paper as he was marking my exam script.

Second was the party thrown by Mrs Thistlethwaite to which Ian replied saying he had lost his invitation. Mrs T replied that he had not been invited as it was a party for everyone (cleaners to VCs) that had been at UEA from day-1, and that Ian hadn’t (I think he arrived in late 1963 or early 1964).'

'I remember Ian arriving late to a genetics lecture at UEA, a copy of Proc. Natl. Acad. Sci. in hand, saying, as he walked through the door, "Sinsheimer has discovered a new single-stranded phage....."

A passion for science and a passion for life. Those were great times and so many great people.'

'It is true to say that through Ian's energy, parliamentary knowledge and determination, standing shoulder to shoulder with the BBKA (British Beekeepers Association), bee research was saved, the profile of bees and the importance of pollinators massively enhanced and public awareness raised to the level enjoyed today. A notable collateral benefit was the renaissance of the BBKA with the huge growth in beekeeper numbers which continues to this day. Never was an Honorary Fellowship, BBKAs highest award, more richly deserved.'