All the world’s a stage

Working from home – the omnipresent WFH – means many things to many people. And for performers who make a living on stage, the challenges are clear. But, as poet and English literature graduate Luke Wright discovered, building up the courage to take your show online has had some surprising and welcome results. 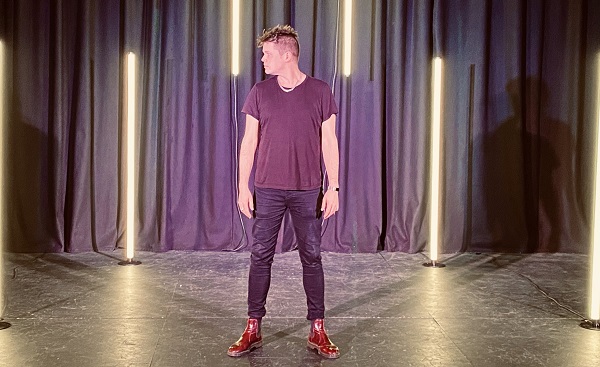 When Boris Johnson advised that theatres and venues close on Monday 16 March I was half-way through a 20-date national tour of my new play The Remains of Logan Dankworth. I tracked the story online, shared in my colleagues’ outrage and started what was to become a new obsession of meticulously going through my income spreadsheet, cancelling subscriptions, re-working budgets.

The next day the cancellations and postponements for April started to come in. I had two gigs that week: a poetry gig in a pub in Eastbourne and a tour gig in Felixstowe. The pub immediately cancelled. The arts centre in Felixstowe wanted to push ahead but I said I didn’t see how we could given the advice. Reluctantly we agreed to postpone until the autumn.

At this stage the UK hadn’t announced a full lockdown (that took another week) but it was clear the theatres were going to be closed for a number of months. Might all this blow over in time for Glastonbury in June I wondered? But in my heart I knew that was very unlikely. I would have no source of income until after the summer.

What was I going to do? Well… I’ve always wanted to do a live video on Twitter or Facebook, but had felt too self-conscious. What if no one watched it? Where would I sit? How does that work anyway? It felt weirdly exposing to show people where I live. But surely if I was ever going to do it now was the time. So on Tuesday 17th I gingerly hit the ‘go live’ button on Periscope (Twitter’s streaming service) and, with terror, saw the ‘watching’ counter tick up.

I mean, sure, very exciting. But I realised I had nothing to say except that I was trialling the software – could they hear it? Would people watch if I were to do a full gig like this? And then, because I felt I had to actually do something I performed the first poem that came into my head.

I was amazed at the response. Over the next 24 hours 4,000 people watched that video (if only for a second or two). Plenty of people got in touch to say how much they enjoyed it. I set up a Ko-fi button for donations and was bowled over to receive money. Actual money! Through the internet! Busking from the comfort of my own home!

I did another trial the next day and then on Thursday 19th – the date of my first cancelled gig – I went online and performed a 35-minute set of poems. Beforehand I was nervous as I would be for any ‘real’ gig, spending most of the afternoon trialling locations in my house, planning and re-planning the set, pacing my living room doing the vocal exercises I usually do in dressing rooms up and down the country.

Undoubtedly I was a bit faltering on that first show, but I made it through with a cap full of donations and 300 people watching live. Without even really consulting myself properly I vowed to be back every single night until it was all over. Over the last four weeks the audience and donations have dropped off a bit, but it’s not really about that. It’s about keeping something alive, reaching out into the world and making a connection. And I will keep this going as long as people keep tuning it. At the time of writing we are 28 gigs in.

Do you have a story to share? Please email communications@uea.ac.uk