All eyes on the Arctic

In 2019 the German research icebreaker Polarstern set sail from Tromsø, Norway to spend a year drifting through the Arctic Ocean trapped in ice. The expedition, known as MOSAiC (the Multidisciplinary drifting Observatory for the Study of Arctic Climate), was an international project with more than 300 researchers from 70 institutions across 20 countries. Its aim: to take ‘the closest look ever at the Arctic as the epicentre of global warming and to gain fundamental insights that are key to better understand global climate change.’

UEA graduate Dr Jessie Gardner was on board, joining in Spring this year. She describes her role on the expedition, the magic of the ice and encounters with polar bears.

We drilled some holes into the sea ice and lowered in an underwater camera, which revealed these beautiful strands of algae moving in the ocean currents and growing beneath the sea ice. 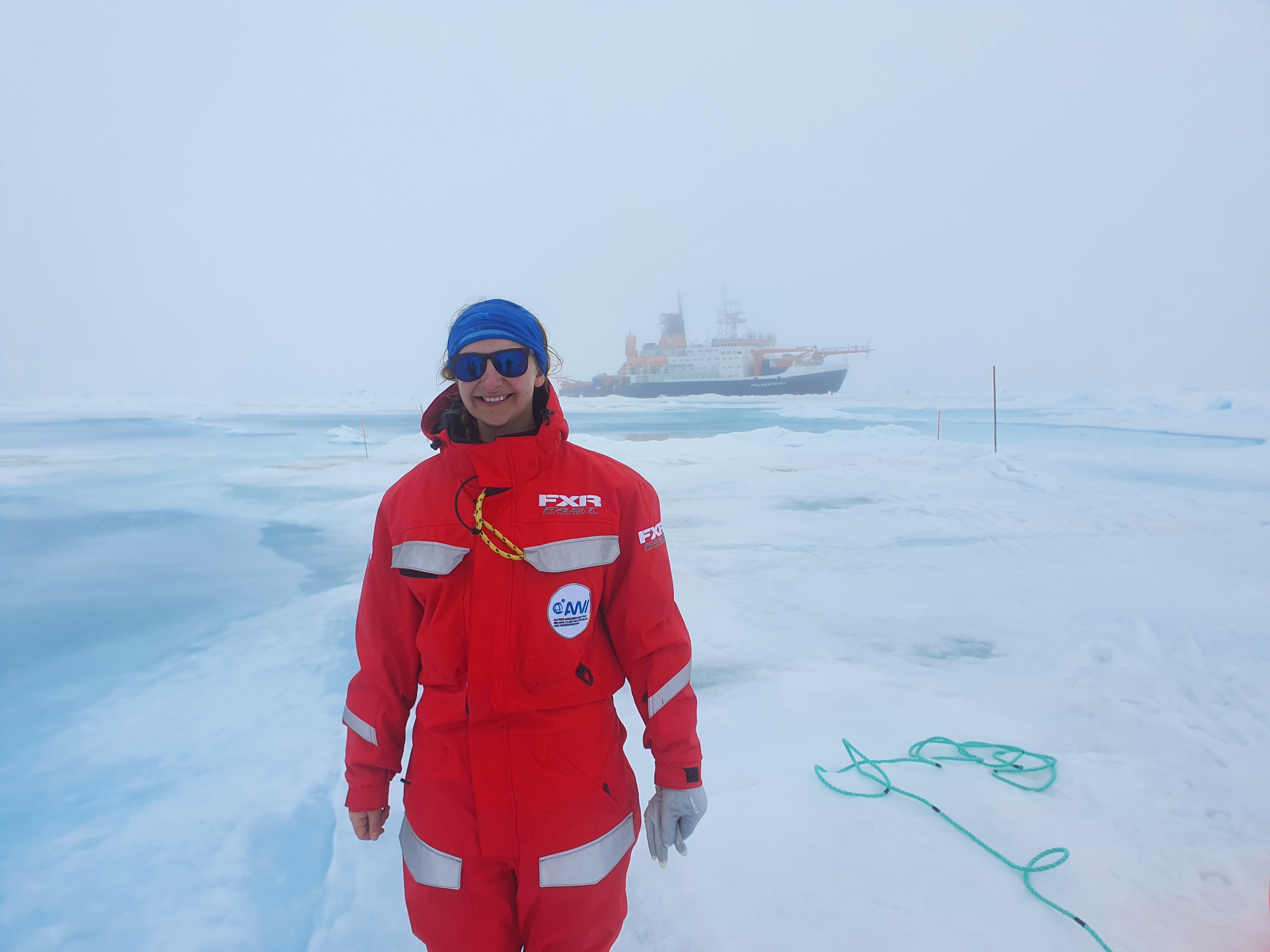 You’ve recently returned from the MOSAiC expedition. How did you get involved in the first place?

I am currently a researcher within the HAVOC project, a Norwegian contribution to MOSAiC investigating the role of sea ice ridges as habitat for Arctic flora and fauna during the summer melt season. I am based at the University of Tromsø, the world’s northernmost university, which is a bit of a change to the UEA campus where I did my undergrad and PhD.

What were you there to do?

I was part of “Team ECO”, collecting samples for numerous projects and institutions around the world which were part of the core programme of the expedition. This was especially exciting since I am used to working on a single, personal project while on field expeditions. I learnt so much about different aspects of ecology that I haven’t had the opportunity to explore before.

We were tasked with measuring the pulse of life within the Arctic, and we collected thousands of samples of water and ice in order to try an capture the rapidly changing ecosystem associated with the melt season.  It is incredible that anything can live so far north in such an extreme, inhospitable environment, but the central Arctic Ocean is home to thousands of microalgae and animals living inside, attached or underneath sea ice.

Understanding the Arctic ecosystem right now is critical, as the Arctic Ocean is experiencing dramatic environmental changes with loss of summer sea ice and increasing water temperatures. With the Polarstern as a base, we had a unique opportunity to follow the organisms that live in the central Arctic over an entire year.

How are things changing in the Arctic?

Nowadays, during the summer, most of the thinner sea ice completely melts, leaving only the thickest parts - such as sea ice ridges - formed when ice floes collide with each other. With nowhere else to go, these ridges might become the last safe havens for Arctic species that rely on sea ice. This was the second reason why I was on the expedition, as part of the HAVOC project. Led by the Norwegian Polar Institute with a team from several other Norwegian institutes, the project aims to gain understanding of how ridges evolve over time and influence the surrounding environment and ecosystems. 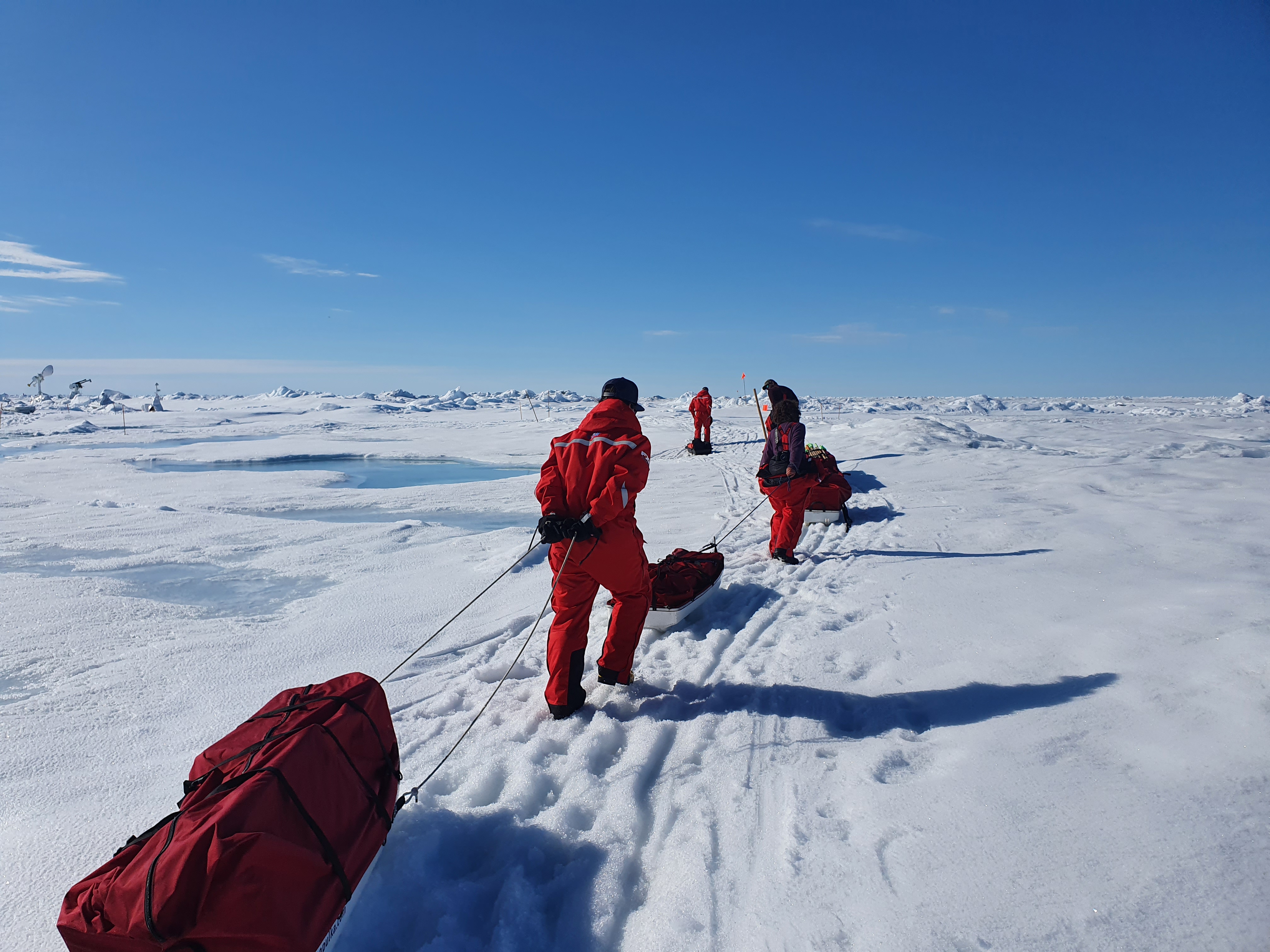 Any surprises from the trip?

This was such an amazing time to be in the central Arctic as we were watching the floe melt before our eyes and under our feet. The changes were happening so fast.

One of the most exciting things for me happened a few weeks into the expedition. We drilled some holes into the sea ice and lowered in an underwater camera, which revealed these beautiful strands of algae moving in the ocean currents and growing beneath the sea ice. Later a freshwater lens developed and the underwater ice environment completely changed; the forests of algae disappeared and instead we observed high concentrations of algae in distinct layers. It was not only fascinating to see but also exhilarating to have the infrastructure to sample these momentary events.

It was also amazing to see so many polar bears. The first sighting we had was of a mother and a very tiny cub. They were very curious and they came quite close to the ship. Over the expedition we had numerous magical encounters with polar bears, but luckily the majority happened after we returned to the ship! 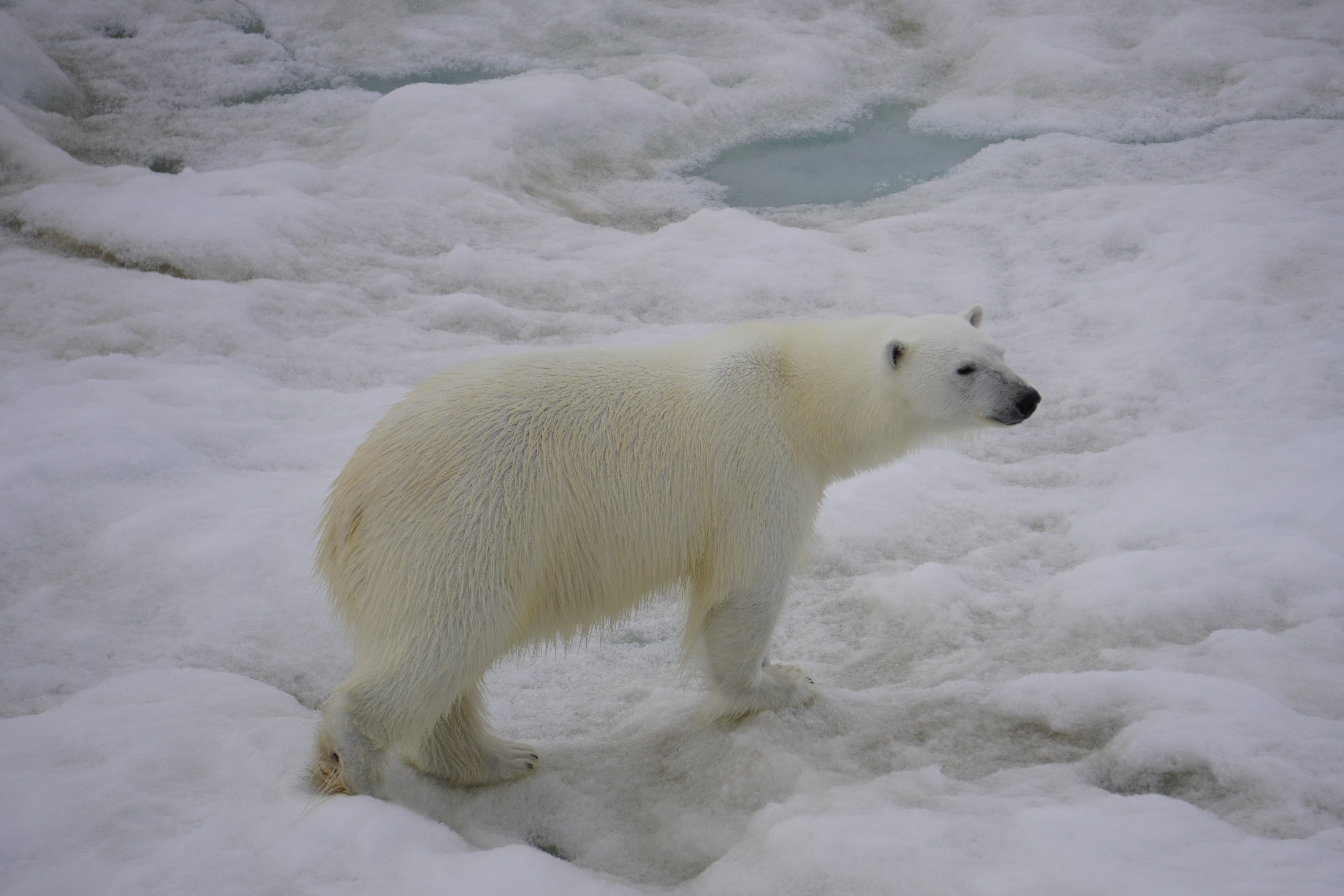 You left during the first wave of European COVID-19 lockdowns. How did that impact your preparation?

This was the largest Arctic expedition in history. The preparation had taken years because of the complex logistical operations, under the leadership of the Alfred Wegener Institute for Polar and Marine Research (AWI) in Germany. Coronavirus really turned everything on its head.

I was due to join the expedition via an aerial transfer out of Svalbard in March, but this was cancelled since Norwegian authorities placed the archipelago on lockdown. On top of that, no icebreakers were available to sail to the Polarstern in light of the travel restrictions. With the world locking down I was really concerned that the expedition might come to an end. But a solution was found!

I travelled to Germany during the UK lockdown in late April, to complete a two-week isolation period in Bremerhaven and have multiple coronavirus tests. During the first part of isolation we weren’t even allowed to leave our room, with all our meals being delivered to our door. Meanwhile, the Polarstern temporarily left the MOSAiC floe and sailed south to an ice-free area near Svalbard. Once it was confirmed that we were COVID-free we travelled to meet the Polarstern on the RV Maria S Merian and the RV Sonne, and were finally able to travel north to the MOSAiC floe. Once we boarded the ships we were in our own little corona-free bubble. Having been in lockdown for so long it was nice to be free from restrictions again and everyone certainly made the most of being able to hug!

In a year of lockdowns, it’s fair to say your experience is one of the more unique. Can you describe what it felt like being locked in ice? The sounds, the movements, the weather...

Sea ice isn’t just a vast expanse of white nothingness - it’s a diverse and beautiful landscape full of tall ice blocks, jagged ridges, leads, cracks and melt ponds which change before your eyes. The colours were insane – depending on the ice type and light environment you can see the purest whites to the deepest turquoise blues. There were new cracks opening and closing throughout the floe, melt ponds and streams forming and draining which we would have to jump over or wade through on the way to collect the samples.

You have to be constantly vigilant, since below us is thousands of meters of seawater, and a polar bear could emerge from the sea ice rubble any time! We were lucky during our time on the floe in that we experienced many periods of perpetual bright sunshine, but we did have some very foggy days where it was too unsafe to work on the ice due to poor visibility hindering polar bear guarding. We were somewhere that very few others in the world have ever been and this was an incredible feeling and experience. 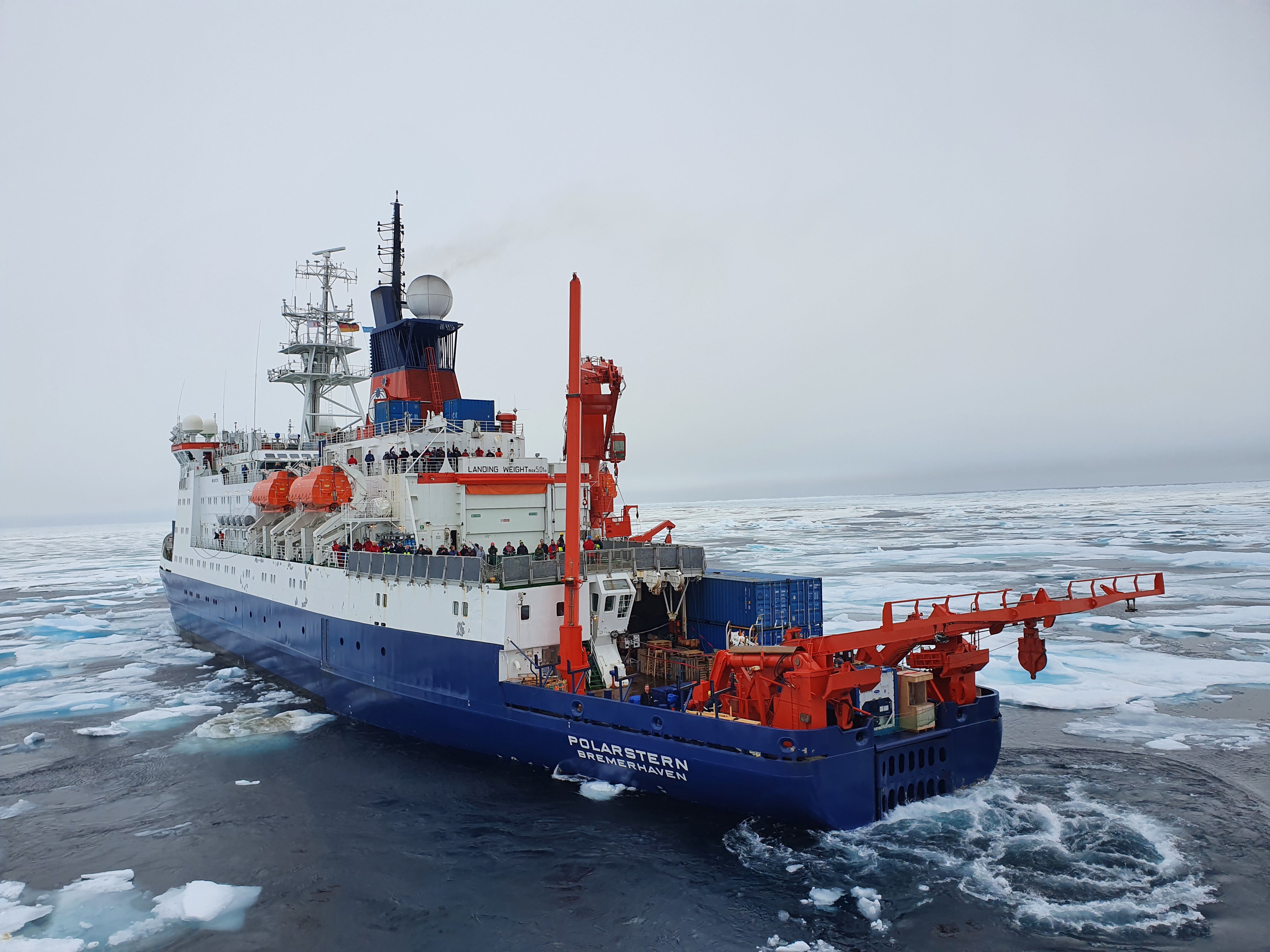 While the field campaign has ended, MOSAiC is by no means over. The ECO team collected thousands of samples which are now being shipped to various institutions around the world to be analysed. These growing datasets are exceptional, not only because of where they were collected, but the fact that they will be combined with measurements of the ocean, atmosphere and sea ice.

Working across disciplines and breaking down the boundaries between traditional subjects will give new perspectives on the central Arctic and it is here that ground-breaking discoveries can be made. Through virtual meetings we have kept the cross-cutting discussions alive and we already have ideas of combining data and theories in unique and exciting ways.

Jessie studied Natural Sciences and Environmental Science at UEA. Find out more about UEA's Climate of Change campaign, and read UEA PhD student Elise Droste's story about her experiences as part of MOSAiC.