Dogu – the enigmatic, beautifully-sculpted clay figurines found abundantly throughout japan – have fascinated archaeologists for over a century.

Dr Simon Kaner's research into these artefacts led to major exhibitions at the British Museum and the Sainsbury Centre, and in July 2016 saw the world's first formal twinning of two archaeological sites: Grime's Graves in Norfolk and the obsidian mines of Nagawa.

Figures from the Earth

Archaeologists are normally tasked with uncovering and explaining the secrets of humanity's past – but even when these defy easy interpretation, their discoveries can strengthen academic links with cultures across the globe, enhance public understanding of the lives of our ancient ancestors, and even spark artistic inspiration.

Dogū were produced by the Jōmon people, one of the earliest known pottery-making cultures in the world. Hunter-gatherers who lived in the Japanese archipelago between 14,000 and 300 BC, their human- and animal-shaped ceramic figurines are astonishingly sophisticated, detailed and diverse.

They're also mysterious. Though archaeologists first uncovered dogū in the late 19th century, there's still little consensus on their purpose or meaning. While sometimes found associated with burials, which could indicate they played a part in religious or funerary rites, they have been discovered in a broad range of other archaeological contexts that makes their classification difficult.

Adding to the mystery is the way that many dogū appear to have been deliberately broken. It's possible that these breakages were symbolic – a form of sympathetic magic to ward off disease, or ensure a safe childbirth. This is comparable to some later traditional Japanese religious beliefs, such as those found in Shinto.

But this is speculation - the fact is that dogū are as curious and enigmatic today as when they were first discovered. Perhaps it's partly because of this that they have lost none of their power to enthral and inspire. 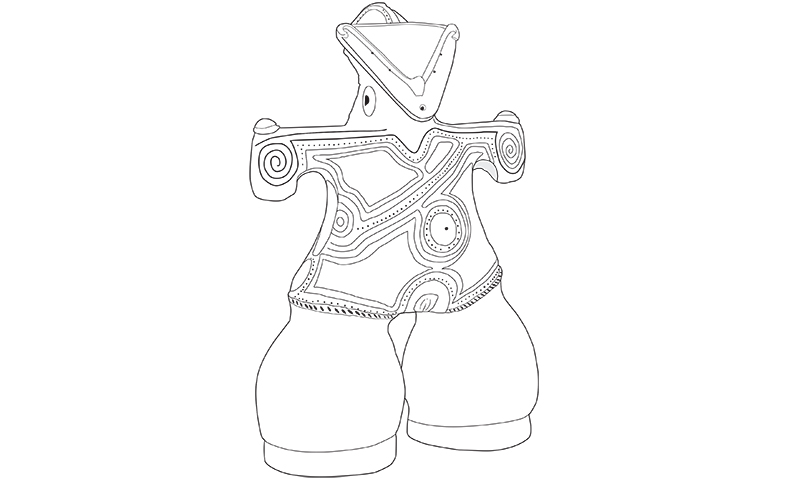 A line drawing of a Dogu figure. 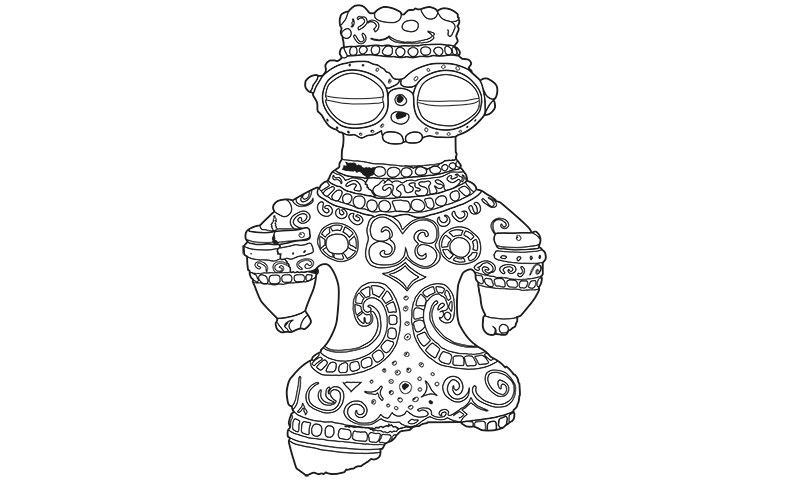 Line drawing of a Dogu figure 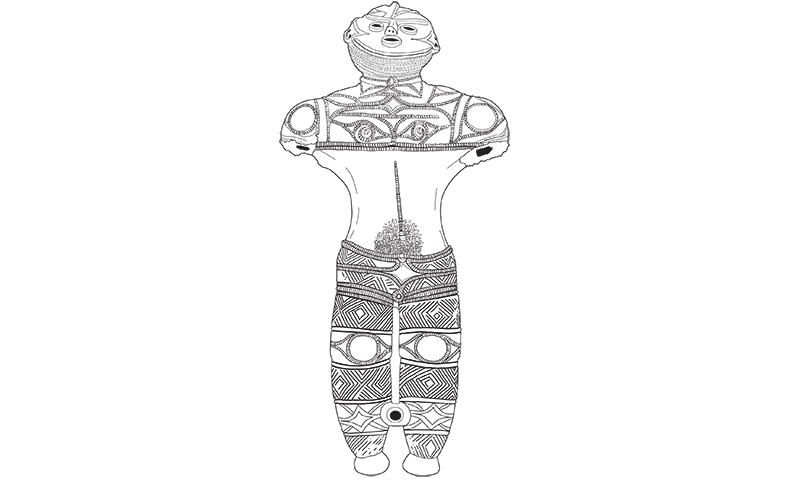 Line drawing of a Dogu figure. 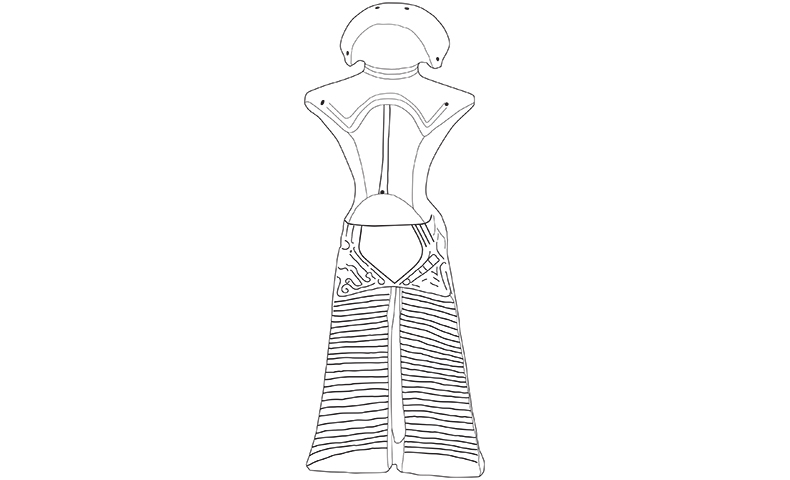 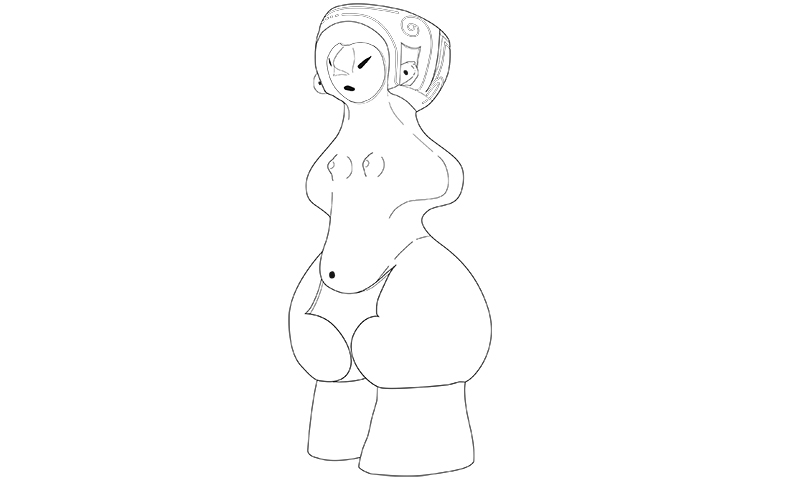 At the World Archaeology Congress in 2006, Dr Kaner's interest was piqued by a discussion on new approaches to engaging the public with archaeology. While artefacts in museums are traditionally locked in glass cases, delegates were encouraged to consider the benefits of letting people touch and handle replicas of these objects, and even recreate them for themselves.

This session led Dr Kaner, together with Professor Douglass W Bailey, Professor of Anthropology at San Francisco State University, to pursue a new research project called Spirits of Clay, resulting in two hugely successful exhibitions: the first at the British Museum in 2009, followed up with a ‘returning-home’ exhibition at the Tokyo National Museum, and the second at the Sainsbury Centre the following year. Between them, these events attracted some 200,000 visitors.

In collaboration with Japan's Agency for Cultural Affairs and Tokyo National Museum, The Power of Dogū at the British Museum featured 67 figurines lent by public and private collections, including three designated National Treasures of Japan. The exhibition, in turn, led to a special presentation of the manga of celebrated Japanese artist Yukinobu Hoshino. Together, these events gave attendees a unique comparison of Japanese representations of the human form spanning millennia.

Unearthed, presented at the Sainsbury Centre, brought together over 100 examples of prehistoric clay figurines: some dogū, others discovered at sites in Albania, Romania and Macedonia. While hugely different in form and style, visitors were invited to consider what similarities of purpose might have led two distinct prehistoric cultures to begin sculpting the human form – however fantastically – in clay. The exhibition was accompanied by an animation, Playing in Time, that was specially commissioned from visual artist Sarah Beare.

As well as lectures and seminars, these exhibitions were supported by something a little more hands-on: a series of 20 workshops in which the public could handle replicas of the figurines up close, before digging in to some wet clay and creating their own. Through this, visitors gained a deeper level of understanding of the level of complexity involved with crafting these intricate artefacts.

'Playing in Time' was created by artist Sarah Beare, for the unearthed exhibition at the Sainsbury Centre.

These two exhibitions had huge impacts for educators, artists and the public alike. Unearthed was held concurrently with a display of contemporary art inspired by prehistoric figurines in Norwich, while the Okayama-based artist Ifurai presented a collection of his Jōmon-inspired work at the Norwich Millennial Library. The Power of Dogū was held again at the Tokyo National Museum when the figures returned home in December 2009.

Several new grants have also been created as a direct result of these projects. Hitachi of Europe has funded a grant to develop an English-language resource to promote the study of Japanese archaeology at schools in the UK and abroad, while the Japan Society for the Promotion of Science has also funded a public symposium on future agendas for university museums.

However, one unforeseen outcome of these exhibitions may also prove to be the most exciting. Among the figurines presented at Unearthed was the Grime's Graves "Goddess" – a rather playful inclusion, given that there is some debate over whether this chalk figurine is a genuine Neolithic artefact, or a hoax planted by workmen at the Grime's Graves site in Norfolk. The curators felt its ambiguous origins made it fit neatly into the blend of ancient and modern that the exhibition wanted to achieve.

Genuine or not, many attendees were enchanted by the Goddess – among them a group of archaeologists from Nagawa, a small mountain town that's home to rich obsidian mines, currently under excavation. Over time, this chance meeting led to a number of cultural exchanges between the Sainsbury Institute and Nagawa's archaeological community, which culminated in July 2016 with another world first: the formal twinning of two archaeological sites - Grime's Graves with Nagawa's obsidian mines..

We may be no closer to understanding the purpose of the dogū, but many thousands of years after they were created, these 'spirits of clay' still exert a power to fire imaginations, and bring cultures together.