Train delays have been increasing in the past few years in terms of the numbers of delays and the amount of delay.

A train could be delayed due to many factors - once the primary (first) delay happens to the first train, that train can have knock-on effects on other trains, causing them to be delayed. These subsequent delays are called reactionary delays.

Over time, the amount of primary delays have remained relatively stable, but reactionary delays have risen considerably. This has resulted in a continuous deterioration of network performance, which is measured by the Public Performance Measure (PPM) statistic.

Given that the rail industry has been collecting large amounts of various data related to train operations, a logical approach is to apply modern artificial intelligence and machine learning techniques to explore exploiting this data to discover knowledge useful for improving network performance.

However, there are two basic challenges. The first is that rail related datasets are complex, diverse and stored in silos, making it a challenge to collate and integrate all the relevant data into a meaningful representation for further analysis. The second challenge is how to efficiently extract useful knowledge from this data and then use it to effectively assist Train Operation Companies (TOC) in making evidence-based decisions for improving their services.

In our study, we take on these challenges and aim to develop an intelligence ensemble system for predicting reactionary delays and then make suggestions for reducing and/or preventing further delays.

Therefore this feasibility study proposes to investigate how to use artificial intelligence and machine learning technologies to address the aforementioned challenge with the ultimate aim of developing an intelligent system for predicting and preventing reactionary delays. The following sections detail the scope of this study, a preliminary design of an Artificial Intelligence enhanced decision support system (AIEDSS) for network operators, and the associated tasks and deliverables.

Aim and Objectives of the Study

The aim of this research is to study the feasibility of developing an intelligence ensemble system for predicting and preventing reactionary delays, with the following primary objectives.

The proposed intelligence ensemble system, as shown in the figure below, consists of four key functional modules: data pre-processing and integration (and database), Delay Explorer, Delay Predictor, and Delay Preventer.

The project has gone very well so far. A large amount of railway related data (from 13 different sources) has been collected, cleaned and processed - this includes real time running data, historical performance data, data about incidents where trains were delayed, and weather data for the past two years. After evaluating the necessary requirements and the feasibility of the system, the basic components of the intelligence ensemble system are currently being prototyped. 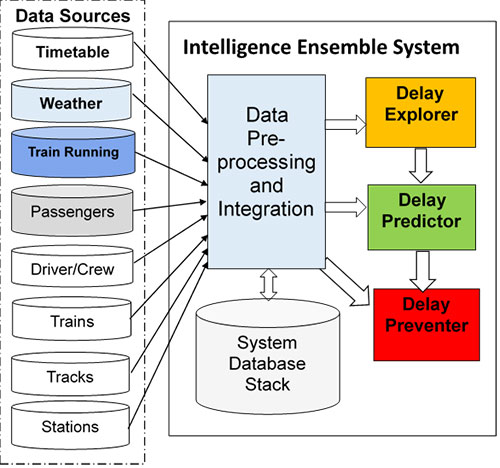