Zeb Soanes graduated from UEA in 1997. With a degree in Drama under his belt, he’s since gone on to become the recognisable voice of the BBC Radio 4 news and the Shipping Forecast, which he’s also read at the closing ceremony of the Beijing Olympics and London Fashion Week.
In 2018 he wrote Gaspard the Fox, a children’s book recounting the story of meeting an urban fox outside his home in London. The follow-up, Gaspard Best in Show, was published in 2019. His third book, Gaspard’s Foxtrot, published later this year, is being set to music by Jonathan Dove and will premiere at the Three Choirs Festival in July. The performance will see Zeb joined by the Philharmonic Orchestra and James Mayhew painting live, before the show goes on tour across the UK.
We spoke to Zeb in February 2020, as he plans to make the recording of his latest book freely available to every primary school in the UK. You can help fund this project through publisher Graffeg, which has launched a crowd funder in support.

How did you and Gaspard meet?

London is full of foxes.  One evening I cycled home to find a particularly handsome fox with an injured leg by my front door.  It recovered and continued to visit.  Friends encouraged me to write a story that celebrated rather than vilified urban foxes and one day, on a long train journey, I began to write the first book.

How did writing words for musical accompaniment differ from writing your other books?

I wrote far too much for the first Gaspard book and helpfully learned that I didn’t need to describe something in words if James could draw it. Sometimes a picture really can tell a thousand words. I also discovered a magical place in picture books where the words can suggest an idea or feeling which an illustration completes: a story in the space between the words. This happens in the first book when Gaspard looks up at a window to see the two men who have cared for him, holding hands.
For this new adventure I not only had to write with my eyes to inspire James’ illustrations but also with my ears to provide suggestions for Jonathan Dove’s music. Working with text, images and music has been the most creative process and it will be exciting to see and hear how all three elements come together on stage.

Your Gaspard books have been very successful. Did you expect the response you’ve had?

The books have been a complete labour of love and it is wonderful that they have been received so warmly.  The letters and drawings I’m sent are hugely rewarding and touching – particularly the interest children have in foxes themselves.  Whenever I visit schools I am bombarded by questions about them. 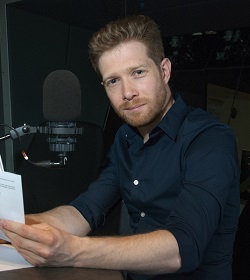 What’s next for the series?

Gaspard’s Foxtrot will be published in June and Jonathan Dove’s orchestral adaption will premiere in July. James and I will be touring the UK with it throughout 2021 whilst I try to write the next story!

How has your degree informed your career?

I chose UEA because at the time it offered a practical actor’s training with the benefit of a broader degree. I started my career in theatre but have since made use of the other elements of my UEA education such as linguistics and creative writing in my broadcasting and writing.

Did you always want to be on the radio, or was it something that came during or after your time at UEA?

It came entirely from my time at UEA. I wanted to be an actor but always played older than my looks. In my first year I was a member of an improvised comedy show called Impromania, based on the TV show Whose Line is it Anyway and it was in a performance at the LCR to raise money for Comic Relief that I was spotted by the BBC and encouraged to be an announcer – perfect for someone who sounded older than he was.

After graduating it took two years’ determined hard work to join the Corporation but over my career I’ve enjoyed tremendous variety: reading the news and shipping forecast, announcing state occasions, launching BBC Four, presenting the Proms on TV, reporting from America. Having set out to be an actor, I’ve spent the past 20 years largely being myself but now, as a children’s author and concert performer, I get to be all the characters. It’s a pleasant full-circle (and a contrast from the very serious business of the news.)

Any fond memories of your time here?

Many. Norwich, as we all know, is a fine city but it is the friendships I made at UEA that I really treasure.

And, finally, do you have any advice to current students who might want to break into the industries you now work in?

You can’t plan it. Say yes to everything, sneer at nothing and be nice to everyone. It might be a random bit of unpaid work you do that years later leads to exciting opportunities, and chance conversations in the quiet corners of parties will take you on adventures you hadn’t imagined.