From UEA Nexus to the Art of Noise - a producer's tale

From Nexus to the Art of Noise: a producer's tale 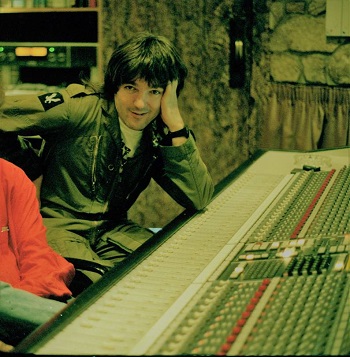 The student Union TV station ‘Nexus’ had been going for a few years when I arrived at UEA in the mid ‘70s. It was a natural fit for me since I had enjoyed a special

childhood in the Lake District messing about with cameras and tinkering with radios. It is difficult to imagine now but Sony had recently launched a range of semi-professional black and white video equipment which Nexus somehow magically acquired. Back then, video was recorded on open reel-to-reel tape machines and the portable OB unit weighed as much as a small sheep, we all ended up with shoulder droop after 15 minutes. Also there was no way to do seamless edits, so every scene cut involved the picture jerking all over the place.

Nevertheless I fell totally in love with all of this primordial technology and spent ages up in the Nexus studios where we made many shockingly amateur programmes, fuelled by both unbridled enthusiasm and Adnams beer. Some of these can still be found on YouTube if you dare to look.

The University was also blessed with a professional Audio Visual Centre ran by the multi-talented Malcolm Freegard, a special gentleman with a most extraordinary history. He and his staff were extremely supportive of our lumbering amateur attempts at television programming and I spent an increasing amount of time at the AVC, later working there as a cameraman in their main studios. With the technical guidance of Wally Tyacke, John Elphick and Pat Stolworthy, I learned many skills that were to guide me during my subsequent career. When I left UEA I had notions of being a film cameraman, though curiously the AVC staff all clubbed together and presented me with a book on Sound Recording (I still have it), they obviously knew something about my future I was as yet to discover. 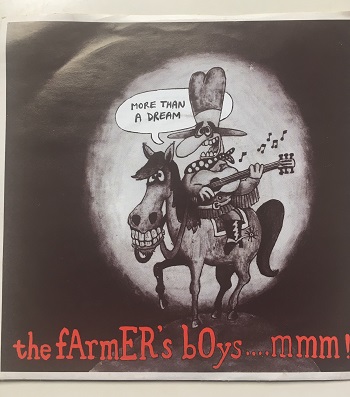 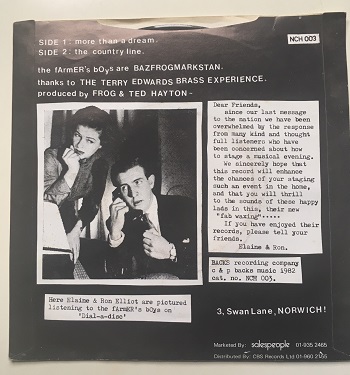 Those mid ‘70s years at UEA also spawned a mass of artistic talent, largely marshalled by the irrepressible Adam Wide and included Tim Bentinck, Arthur (Brian) Smith, Babs Sutton, Maxine Ostwald, Phil Nice, Philip Bird, Brian Bowles, Julian Smedley and Richard Lee, all of whom enjoyed much success after UEA. The last three were to change my life entirely. I had known Richard since schooldays back in Cockermouth; he played the double bass and teamed up with Julian and Brian at UEA to form the Bowles Brothers. They also enlisted Sue Jones Davies, an extraordinary talented actress and singer who is probably best known for her starring appearance in Life of Brian. The Bowles Brothers were an acoustic group, singing 4-part close harmony with guitars, violin and double bass.  Unsurprisingly, they were an entirely unsuitable match for the tinnitus-inducing PA systems of the London pub rock scene; I do recall with horror their first performances which were a total nightmare of endless feedback. The band (in some desperation) invited me to apply my technical skills to tame their sound and after a few weeks of experimentation we slowly started to get everything under control. Two weeks later they landed a European tour supporting Don Mclean so my fifth ever live mix was in the Albert Hall, a true baptism of fire! This was for me the beginnings of a long career in music production which eventually took me to recording studios all over the globe where I was lucky to be working with many of the world’s top artists.

It all started in the late ‘70s when I was introduced to the talented owners of Spaceward Recording Studios. They were both Cambridge graduates and invited me to employ my electronic skills to help in the construction of their novel computerised recording console (believed now to be the world’s first) for their new studios based just north of Cambridge. When the studios opened, I was one of just a few who had an intricate knowledge of the console and so began to cut my teeth as a recording engineer.

The recording sessions were long!  Bands who had only booked for the day would barrel up at 10am and then we would burn through to 2am in the morning. They would invariably leave with the ¼” tape masters of both A&B sides of their single ready for pressing. Time management was critical; after a few hours’ kip it would all start again with another band. On occasions I even recorded entire albums in a day, skills that would later come in handy with Dave Edmunds.

The studios became very popular not only with local acts such as The Higsons and the Farmers Boys, but also with international chart topping artists including The Stranglers, Dave Stewart & Barbara Gaskin, Gary Numan, Stiff Little Fingers, Scritti Politti, UK Subs, the list goes on and is long. However Spaceward was much more than just a studio and I learned so much there, the wealth of creative talent of the Spaceward staff ensured a tremendous pioneering spirit and it was not unusual to witness new equipment being designed and built on the spot to achieve a particular sound.

In late 1984 I was made an offer by a prestigious London management company, so I moved on from Spaceward to become a freelance engineer/producer. Almost immediately I was working all over the world with artists including the Art of Noise, Tom Jones, Eric Clapton, The Stranglers, The Moody Blues, Paul Young, Berlin, All About Eve and Dave Gilmour, this list is long too. On many occasions I was spending up to 3 months locked away in some very beautiful residential recording studios, so inevitably our relationships became quite close. Bearing your soul In front of a microphone requires a special level of trust between artist and production team, Yeat’s “I have spread my dreams under your feet, tread softly because you tread on my dreams” sums it up perfectly.

Even though I was having the time of my life, by 1993 it was clear to me that a certain MP3 file format was going to change the music industry forever so I decided it was the right time to realise some of my other goals. However I still remain in touch with many of those wonderful artists. I was thrilled when Anne Dudley received her Oscar and Dave Stewart & Barbara Gaskin keep dragging me off to Tokyo most years to ensure my deafness is complete!

There were many memorable gigs at UEA, unknowingly we were witnessing one of the most prolific eras of modern music drift through the doors of the Lower Common Room during those years. However one artist stands out. His music had a profound influence upon me and also many of the artists I subsequently worked with in later life. Seedy as it may sound, I first met John Martyn in the toilets adjacent to the LCR. As we were “hanging out” together he asked me if I was going to his gig and I had to sheepishly admit that I was somewhat brassic and couldn’t afford it. He pulled a fiver out from his pocket and gave it to me so I could get in. Even then I knew most of his songs note-for-note and I’d already seen him in the LCR about 9 months before with Paul Kossoff, previously of Free. Though that concert was itself amazing, it was sadly clear to everyone attending that Kossoff was in a chemical tailspin from which he would unlikely recover. This later gig (if my memory serves me correctly) was just John with jazz bassist Danny Thompson, well known to me from his involvement with Pentangle. Together they possessed an empathy which remained firmly soldered regardless of their level of intoxication. Martyn’s unique percussive guitar style combined with his seminal use of the Echoplex provided the perfect canvas for his slurring mesmeric beautiful love songs and belied an inner torture that clearly was the furnace from which all this talent was forged. If he is unknown to you, find yourself a quiet 40 minutes and breathe in Solid Air, by any metric one of the greatest albums ever made.