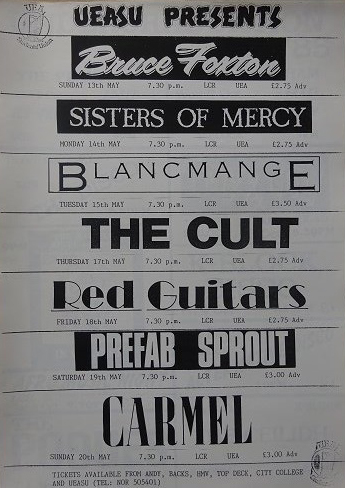 Just look at the poster advertising May 1984s UEA gigs: Bruce Foxton, Sisters of Mercy, Blancmange, The Cult, Red Guitars, Prefab Sprout and Carmel. What a line up! I’d jump at the chance to go to every one of them. It was actually the second of three shows the Red Guitars played at UEA’s LCR in 1984; this time supported by Flesh for Lulu.

The first of our UEA gigs was a foggy Valentine’s Day when we supported The Smiths on their tour to promote their debut album. It was an exciting time - The Smiths hit the big time just as the tour started. Having shared the bill with them a couple of times the previous year, we got on well and were all anticipatory and in good spirits. We’d recorded our first album, ‘Slow to Fade’, which was flying high in the Indie charts after a handful of top Indie singles: ‘Steeltown’, ‘Fact’, ‘Marimba Jive’ - and our single, ‘Good Technology’ had just made number 11 in John Peel’s Festive 50. We’d played plenty of live shows over the previous year, so we were raring to go.

I’ve got a great piece of memorabilia - thanks to David Eastaugh of Future Radio’s C86 show, who sent me photos of The Smiths/Red Guitars UEA contract and rider. We got 24 lagers, orange juice and sandwiches and The Smiths rider included: ‘A selection of flowers to the approximate retail value of £50, including gladioli, but no roses or other flowers with thorns’.

After the gig, if I remember rightly, we set off home but the fog was so bad we turned round and were put up for the night by one of the UEA entertainment committee members, who kindly offered us floor space in his flat. After Norwich we supported The Smiths for the rest of February and March, finishing with a couple of stormers at Hammersmith Palais and Manchester Free Trade Hall. After that we headed out to Europe for a bunch of dates starting at the infamous Berlin’s Loft in Metropole, hosted by the legendary Monika Döhring. We played there three times before the wall came down. Everything about the trip was fascinating – the drive through East Germany, the wall, the vibe of the city and the decadence of the club. We returned to the UK in the middle of May for a gig at Manchester’s Hacienda and then back to the UEA for the poster gig, on Friday 18th May sandwiched between The Cult and Prefab Sprout.

Before the year was out we had another UK tour under our belts and returned to UEA on Sunday December 2nd. Three times in a year; it must have been one of our favourite venues! We closed 1984 with a great gig at The Electric Ballroom in Camden and a home town gig at Hull Truck theatre. 1984 was a great year for us, plenty of gigs interspersed with recording John Peel and David Jensen sessions at Maida Vale, and TV shows - The Old Grey Whistle Test and The Tube - lots of fun and great to remember.

Thanks for inviting me to contribute to the UEA gig history, it’s a fabulous archive, full of fascinating memories, a wonderful collection of stories, quirky snippets and pictures. Love it!

About the Red Guitars

The Red Guitars were a product of the vibrant Hull music scene of the late 1970s and early '80s. Encouraged by a good review of their demo tape in the Melody Maker the band recorded a single, Good Technology, and released it on their own Self Drive label. John Peel played it on the radio and, as a result, Tyne Tees Television filmed them for the Tube and Johnny Marr invited them to tour with the Smiths. They were up and running. The Red Guitars website  is a celebration of the Red Guitars and the Hull music scene they were a part of. It covers only the initial independent phase of their career up until they signed to a major record label.