RICHARD BALLS ARRIVED WITH A PLAN (THEN ENDED UP BACKSTAGE)

A man is smashing himself over the head with a tin tray - very hard. Beside him, a lanky woman on bass guitar sneers at the audience as if a smile would cause her dark, spiked up hair to go limp...

The singer…well, he looks trolleyed and is having a sit down in front of the drum kit. All in all, it is sight to behold as I saunter into the UEA’s Lower Common Room on a Halloween night to see Elvis Costello & The Attractions.

Apparently this rum bunch are called The Pogues and there are posters up promoting their debut album Red Roses For Me, released on Costello’s old label, Stiff. No one seems to know what to make of them and there are more people at the bar than gathered around the stage. As a 17-year-old obsessed with Elvis, the main event just can‘t start soon enough. However, it’s impossible not to stand and stare at the support - a kind of Makem & Clancy meets The Sex Pistols. In time, Shane Macgowan and co will acquire legendary status, but on this autumn night in Norwich they are a little-known, albeit welcome, warm-up.

For the first time at a gig, I have arrived with a plan to try and get backstage afterwards. Sleeves from two of his singles have been carefully tucked into my coat pocket in case I get lucky. By the time the lights fall to signal his entrance, I’ve taken up a position near the front of the stage. The group burst straight into a frenetic Radio Radio, one of my favourite songs, and I am immediately part of a sweaty seething mass, punching the air and mouthing every word. I am boiling in my overcoat, but I couldn’t care less. I am just feet away from someone I’ve only seen on TV and music papers. Elvis Costello is in flipping Norwich and in front of me!

The tour is to promote the album Goodbye Cruel World, regarded now by many as one of his poorest. That summer it had produced a minor hit in ‘I Wanna Be Loved’, while its follow-up The Only Flame In Town barely lit up the Top 75. But while the album has too much eighties sheen for its own good, the show is a rollercoaster ride and everything I had hope for in preceding weeks and days. Pump It Up, Oliver’s Army, Mystery Dance - vintage numbers from his songbook that have not been jaded by time. By the end, I am euphoric. I will go on to see him many times, but this gig will always be special.

Armed with the obligatory T-shirt and tour programme from the merch stand, I make my way outside and head to the side door. A few others are congregated here in the hope of meeting the man himself. We wait patiently and after a while a security official opens the door and lets us in. Can this be happening? I am actually being allowed in to meet him? My nerves are in shreds, my heart is racing. Costello has a reputation for being surly and I wonder if he will be in the mood to give autographs and make small-talk with fans.

We are ushered into a large open room where members of both groups are winding down after the show. A trestle table is groaning under the weight of cans of lager. Elvis is sitting on a sofa and is already chatting to a fan who looks like she has brought her entire record collection. Surely he’s not going to sign all these, I think? To my amazement, he is relaxed and smiling and patiently signing every sleeve. When he’s done, I hand him mine. I’m too star-struck to say anything, so I just thank him. 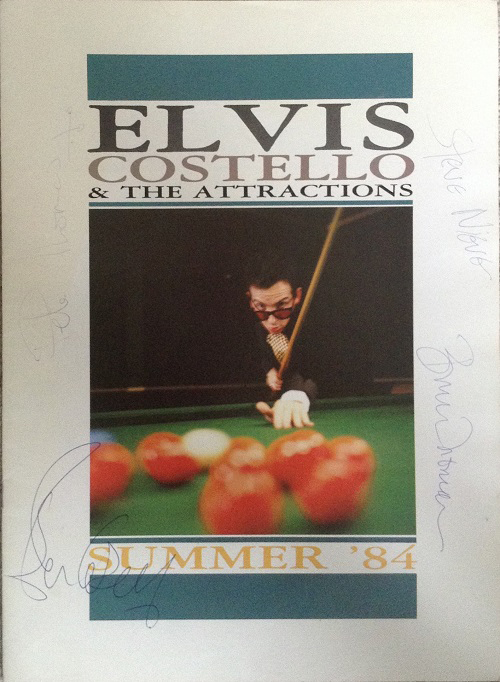 Someone suddenly shouts over the chatter to get everyone’s attention and we are asked to sit down. I park myself on the nearest seat, right next to the Attractions’ drummer Pete Thomas. There are only two dates left on the tour and it seems some presentations are being made. Elvis unwraps a gift which turns out to be a tin tray. Cheers go up. There is a party atmosphere and we are welcome to stay. But my dad is waiting in the car park and I make my way out, still trying to take it all in.

Years later I will discover why Elvis was in such a convivial mood. He and Cait O’Riordan, the Pogues’ bassist, have become romantically involved, to the sniggering of their travelling companions. The relationship lasts 17 years - a lifetime by rock ‘n’ roll standards. My mission to meet my idol proved timely.

Forward to 2012 and I am sitting in the sunshine in the Wiltshire countryside chatting with Bruce Thomas, one-time bassist with The Attractions. I am writing a book about Stiff Records* and taking the opportunity to meet some of my favourite artists and musicians. Subjects include Pete Thomas, who I interview the day after seeing the band at the Royal Albert Hall, and the Pogues’ hell-raising frontman Shane Macgowan. Recalling the tour I had seen them on, he said: ”It was great. We nearly got thrown off the tour three times. I did IRA graffiti all over the PA bus and Spider did UDA on the other side. When Costello and that lot were on stage we used to drink their fucking booze. The guy was in love with Cait, so that’s the reason we didn’t get sacked off the tour.”

*Be Stiff: The Stiff Records Story is published by Soundcheck Books 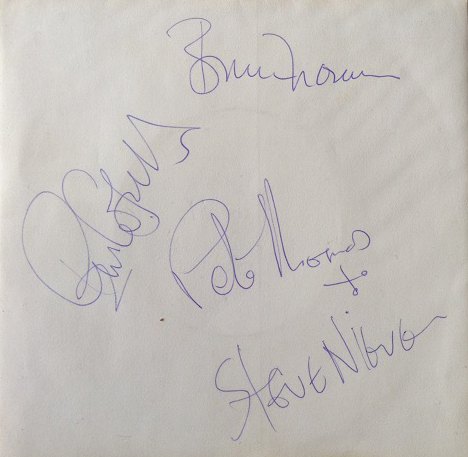