A BROKEN DICTAPHONE BUT A MOST MEMORABLE GIG

Missed ones, Best ones, Brilliant ones, legendary ones – my Norwich gig history

It was on 15th May 1991 that Richey Edwards from the Manic Street Preachers carved another notch in the bed post of Norwich music history.

It was at the Arts Centre after their gig that the guitarist took a razor blade and sliced ‘4 Real’ in his arm to make a point to NME journalist Steve Lamacq. I know, because I was there. If you see an uncropped photo of Richey brandishing his bloodied arm, that’s me on the left.

I’m looking shocked, because I’d just bandaged his arm up and was furious the NME photographer wanted it uncovered again so he could get his money shot.

I was due to interview the band for my evening show on Livewire. After Richey slashed his arm, the band asked me and my friend Sandy, who was my plus one for the night, to get in their tour minibus and direct them to hospital, as we knew the way and they didn’t want to ring an ambulance.

When we arrived and Richey was getting treated  (after first dropping off Sean and James at their hotel near the train station, via KFC for chips), I finally had my interview with Nicky in the A&E waiting room at the old Norfolk and Norwich.

As if the night couldn’t get more surreal, my Dictaphone failed so I don’t have a word of what he said on record. My first lesson in journalism – never rely on technology and always take notes.

I was in my second year at UEA, doing a major degree in English Literature with a minor in Film Studies with the express purpose of becoming a music journalist. I couldn’t have been in a better place – Norwich’s music scene was booming with local bands including Basti and Passing Clouds making waves in the music press and gigs on virtually every night.

As well as doing the radio show, I would go on to write gig reviews for Concrete when it launched in January 1992 – all on my mission to land my dream job at NME.

Music was my everything – and still is – so I went to every gig I could afford or blag, with some notable exceptions.

I was supposed to go and see Nirvana at the Arts Centre, but was in a terrible mood so stayed home. My friends went – Nirvana were actually supporting Tad – and my friend Teewye got a hug from Kurt Cobain after the show.

But of the gigs I did go to that blew me away – My Bloody Valentine at UEA almost took the top of my head off. I’d never heard a gig like that before or since: the sound was like a 747 taking off in the LCR.

Other brilliant LCR gigs came from the likes of EMF, Lush and Blur – the latter gig sparking something of a love affair with the band that continues to this day.

And of course, the Waterfront opened in 1991, and there were some memorable nights there over the years, including a mind-blowing gig from Nick Cave upstairs in 1992 as part of the first ever Radio One Sound City (which eventually morphed into the station’s Big Weekend). I met the great man after and I still don’t think I’ve recovered. I also saw amazing shows downstairs from the likes of Pulp, Radiohead, World of Twist and The Wedding Present (I had my photo taken in the dressing room shower after with lead singer David Gedge, but that’s another story…)

The Norwich music scene truly shaped the course of my life and made me who I am. As a result of going to all those gigs and interviewing all those bands, then training to be a journalist on the Eastern Daily Press after I graduated in 1992 (with a 2:1), I eventually landed my dream job at NME in 1996. Even though I missed that Nirvana gig and didn’t get what would have been a legendary Manics interview… 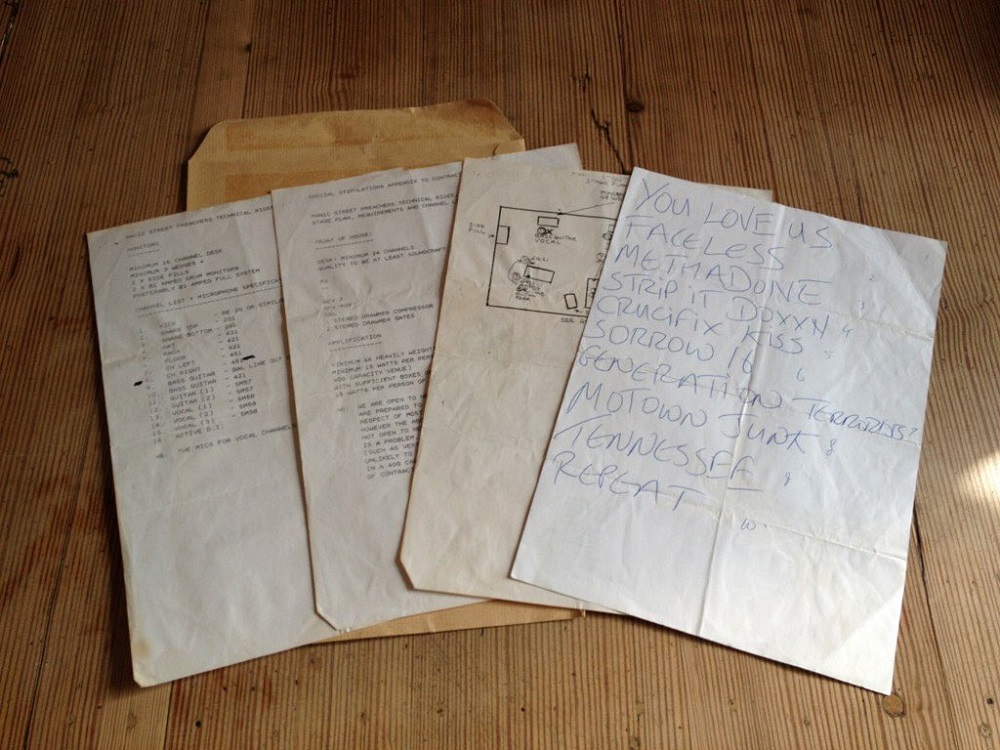 Above: Set list from the Norwich Arts Centre gig by the Manic Street Preachers