Yes I was a teenage punk rocker in Norwich in the later 1970s, and People’s club (Tuesday and Saturday nights), St Andrew’s Hall, and the UEA were my live music haunts. For records, Ace Records on Lower Goat Lane, for books, Freewheel anarchist bookshop on St Benedict’s.

A couple of decades later I wrote down some of my memories and transcribed diaries about those teenage punk years, radical politics, squatting, free festivals and East Anglian Fairs, the whole post-hippie counterculture I was involved in through my twenties. (These kinds of topics would form the basis of my first scholarly book, Senseless Acts of Beauty: Cultures of Resistance since the Sixties, in 1996.) 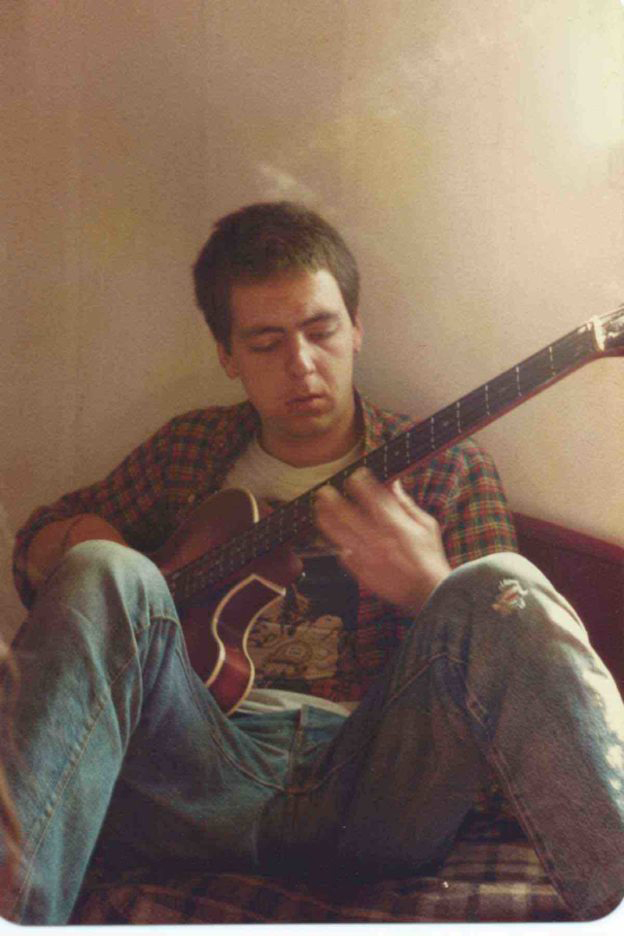 Here’s the account I wrote in that little private punk memoir of one gig at UEA. I still have the poster.

The first Stiff tour stopping off at UEA LCR is a great night for Norfolk punk, for most of us our first opportunity to see all on a terrific bill of Ian Dury, Elvis Costello, Wreckless Eric, and others whose newness we’re not quite so convinced by: Nick Lowe, Dave Edmunds, Larry Wallis of all people. Twenty-minute bursts each, very punk. There’s a great curiosity in the hall about Ian Dury, who we’ve read so much about, punk’s Gene Vincent. We’re sure we’ll recognise him straight away. Even Stiff Records can’t have a whole load of crippled singers, can they?

I’m at the front with all the other punks, and the more restrained punters sit on the steps further back, or being cool, out in the student union foyer waiting till they hear something interesting. I can’t understand this strategy: everything is interesting to me, even the bad bits are good, especially the bad bits. And anyway, punk’s a rejection of restraint and coolness. Remember, I’m sixteen years old, and totally caught up in the new music and politics of the time. No time for cool, we’re changing the world.

The best bad bit, the first of four or five different twenty-minute sets, features a dead ordinary, nervous, twitchy, grinning young bloke playing, of all things a, I’m immediately aware of a great punk touch, 'Top Twenty guitar', one you get from Woolworth’s for twelve quid or so, the cheapest guitar in Britain, so cheap I’ve never ever known anyone own up to having one, let alone see one played by a headlining musician. The bloke looks like he wants not to be there, like he’s been sent on for a dare and has frozen in front of all those faces.

He’s standing behind the mic stand, singing tortuously. At the back of the stage a young pale black woman has a bass guitar, the cheapest range Fender, a Musicmaster maybe, and she plays soft lines on it with a little accomplishment. The singer has like a school blazer on, with corny badges all over the lapels. We’re, well, puzzled by the amazingly low-key start to this packed bill. Two things happen though to turn the crowd, the punks anyway, to key them into understanding and enjoying the performance, its nonchalant ineptitude.

First, a rumour goes round about the drummer - yeah there is one, just no-one had noticed. There are several kits on the stage for the multiple bill, but in front of all of them is a miscellany of unmatched drums, a tinny bass drum, a couple of cracked cymbals, hi-hats like can lids. The bloke playing them has a kind of square head and neck, a packed chest, wasted-looking legs. The drummer’s Ian Dury.

Second, the singer breaks into a familiar guitar riff - he is Wreckless Eric, and this is his classic unrequited love song, ‘Whole wide world.’ There’s only one girl in the world for you, and she probably lives in Tahiti, so his mum says. What an awesome start to a great night. Dury comes on again later with his carrier bags and cockney bonhomie, throws millions of button badges out, different colours, each with a word: &sex &drugs &rock &roll. Costello is blistering, does ‘Alison’ and ‘Watching the detectives’ to huge cheers. All the musicians from all the bands come on at the end for an extended encore of Dury’s ‘Sex & drugs & rock & roll,’ during which the power breaks down and the crowd keeps the chorus going for what seems like ever.

Some of the songs from that UEA night are included on the live record of the tour, Live Stiffs, though sadly not Norwich’s endless version of ‘Sex & drugs’ when the eLeCtRicity cut out. A couple of months after the Stiffs Greatest Stiffs gig, all the Norwich punks were out at Cromer Links on Xmas eve for the Sex Pistols, but that’s another story…

Because live music at UEA was so formative in my young political/cultural/attitudinal years, when I came back to Norwich to work here in late 2015 one of the first things I did was poke around the LCR; it Seems so much smaller.

As an academic I’ve been writing about disability and music for a decade now. My way in to the subject was through punk, and specifically Ian Dury. I can safely say that a book like Shakin’ All Over: Popular Music and Disability (2013), or some of my subsequent scholarship such as Punk rock and disability: cripping subculture (2016) wouldn’t exist if it hadn’t been for the presence of a rather intense teenage boy staring at Dury, taking it all in without quite knowing why, that night forty years ago in October 1977.

I’ve never forgotten Wreckless Eric’s 'Top Twenty' guitar from that night, but in honesty I had forgotten my own description of Dury’s drumkit. The disabled soon-to-be-star, who would describe himself in his own lyrics as ‘a raspberry ripple’ and ‘a flaw of the jungle’, playing something ‘unmatched, tinny, cracked' - now, that’s a metaphor I would definitely have used in Shakin’ All Over. 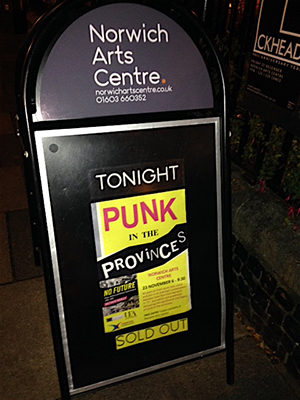 George McKay is Professor of Media Studies at UEA, and an Arts and Humanities Leadership Fellow for the Connected Communities programme.

He is currently editing The Oxford Handbook of Punk Rock. George recently organised a discussion at Norwich Arts Centre (‘Premises’, in his mind) on 23 November called Punk in the Provinces.