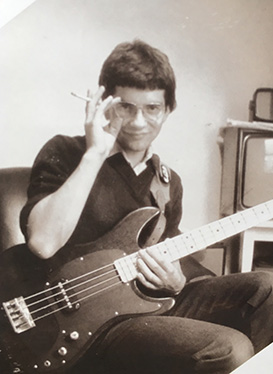 Before I start reminiscing about my rose-tinted memories of gigs I have loved, let’s talk about the elephant in the room. The LCR.

The Lower Common Room has never been a beautiful venue, unlike say, The Lyceum or the Brixton Academy, where Victorian and Edwardian splendour was repurposed for Rock'n'Roll. Designed and built in the white heat of 1960s brutalist Britain: the university's main venue is a functional void, and for some time the only noticeable architectural features were a pair of plain concrete pillars at the stage boundary.* On one of these, some wag (probably a bored 1970s roadie) had memorably grafitti'd 'Look out, post in the way!' (See pic of Denis Bovell below)  However, it is functional and it does have the advantage of making whatever is happening on the stage the focus of the audience’s attention at all times.

*until the venue's interior layout was turned ninety degrees east to allow for extra capacity and a higher performance altitude (and to ensure all worshippers faced Great Yarmouth?).

On one of the pillars, some wag (probably a bored 1970s roadie) had memorably grafitti'd 'Look out, post in the way!'

This was my first ever UEA gig. I'd been mired in a schoolboy obsession with Progressive Rock (and still have a soft spot for Gong), but this concert changed my outlook and opened my ears to a different kind of theatricality. Deaf School played snappy Art Rock with humour and even a splash of vintage flair. Not quite Punk, but their attitude gave an inkling of a new revolution to come. The gig list says that John Martyn supported, but I have absolutely no recollection of this (and I like John Martyn). 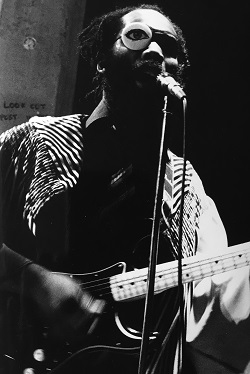 Having failed to see the Pistol's Anarchy show, I eagerly anticipated my first 'proper' Punk concert in the LCR. I wasn't disappointed. In its own way it was as theatrical as many Prog gigs, with great costumes (Slaughter & The Dogs singer came on in a raincoat covered in talcum powder which produced clouds of dust when he pogo'd) and low-budget pyrotechnics (Rat Scabies set fire to his cymbals with his usual scant regard for health and safety).

My favourite local band, The Monotones, played outdoors in the square and were deemed 'honorary punks' for the day as they played relatively short and fast songs. During a toilet break for the guitarist, Charlie the singer taught a local lad the 'Pretty Vacant' riff (see pic right). Inside the LCR, Norwich scene pioneers The Right Hand Lovers performed on the main stage with Charlie Higson (only recently nicknamed 'Switch') sporting a rather fashionable black PVC chemisette. 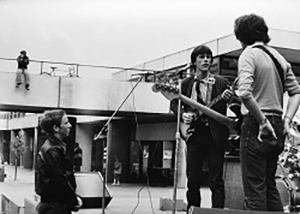 One of the best nights of music I'll ever see. I remember it being utterly joyful organised chaos. Wreckless Eric forgot to plug his guitar in for a few songs, Nick Lowe played the purest of pop for now people, Elvis Costello stormed through his 30 minute set and Ian Dury and the Blockheads were at the height of their powers, with the Upminster kid acting like the ringmaster at a Rock'n'Roll circus. Ian returned the following year with Matumbi and Whirlwind on the same bill, for an equally enthralling evening. I managed to take half a dozen photos before having my camera confiscated. 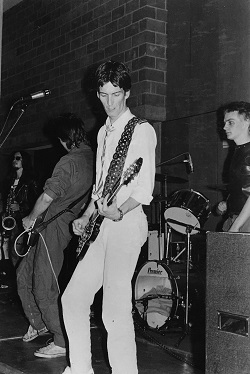 Another glimpse into the future came when The Human League supported US Avant-rockers Pere Ubu. I'd heard the three-piece League on the John Peel show, but this was the first time I'd actually seen a group do a whole set with no guitars. It was deeply unsettling, but in a very good way.

I have been lucky to play on the main stage a number of times in various bands. For an under-achieving local post-punk group, it felt like we'd made it to the pinnacle of our careers when Falling Men were third on the bill to legendary Japanese power pop act The Plastics. At 7.30pm, there may have only been a handful of people watching, but to be on that hallowed stage, playing through a big PA system, was a boyhood dream come true. Other slightly esoteric support slots I've enjoyed being part of were blues legend Jimmie Witherspoon, Faith No More and a TV appearance with Lionel Blair. 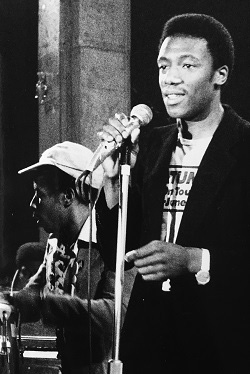 There's a special place in my heart for this gig by The Sugarcubes, which was also my first date with my future wife. Again, John Peel introduced us to Bjork's stunning new voice and UEA had the foresight to book them on their first major tour. I can't actually remember much about the actual concert, but it must have been a good night as we're still together after nearly 30 years.

Lastly, I've always been a sucker for a comedy turn. Which leads me to relive the hallucinogenic experience of seeing Dread Zeppelin: a bunch of wonderfully weird Americans playing reggae versions of Led Zeppelin songs led by a portly, white jump-suited Tortelvis. Miraculously, the concept worked and the whole gig was actually a lot more fun than it had any right to be.

Thanks, UEA (and Nick Rayns, of course) for promoting Norwich from its position as a rural backwater on the touring map and giving us the opportunity to experience the very best music for the past forty years plus. 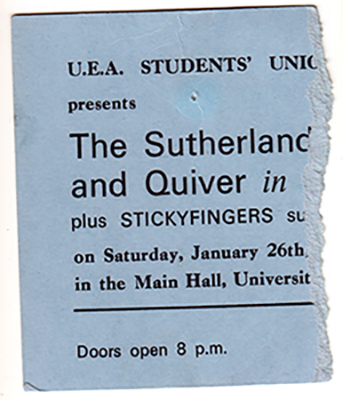