The overall objective of the Wensum Demonstration Test Catchment project has been to assess the effectiveness of a variety of land management measures aimed at reducing diffuse pollution from agricultural activities across the whole river catchment.

Farming is not the sole cause of diffuse pollution but it does contribute approximately 60 per cent of nitrate, 25 per cent of phosphorus and 70 per cent of sediments entering our waters, amongst other pollutants.  Defra’s England Catchment Sensitive Farming Delivery Initiative programme operates in the Wensum catchment and is encouraging land managers to undertake measures funded under Defra’s agri-environmental stewardship schemes that will help to reduce diffuse pollution.

The extensive monitoring work undertaken in the Wensum Demonstration Test Catchment will help provide the ‘evidence base’ to assess how well these measures are working and develop recommendations that will help refine future agri-environmental policy to reduce pollution further.

What mitigation measures are available?

How were mitigation measures assessed?

With the close cooperation of Salle Farms Co., NIAB-TAG and Frontier Agriculture, nine fields were selected for experimentation with cover crops and strip tillage to reduce the impact of autumn runoff of residual nutrients following the harvest. These measures also help mitigate soil sediment loss from bare field surfaces especially where there is a risk of runoff from compacted soils.

In the first year, 2013-14, seven of the nine fields at Salle occupying 102 ha were sown with oilseed radish as a cover crop. This cover crop was followed by spring beans established using strip tillage. In subsequent years until 2017, strip tillage was used in the establishment of autumn-sown crops in rotation. The remaining two fields of 41 ha acted as a control and were managed under conventional farm practices (no cover crop and with variable depth cultivation, including complete inversion ploughing).

Soil mineral nitrogen, field drainage and stream water quality were monitored in response to the introduction of these mitigation measures in order to assess the environmental benefits in comparison to other important factors such as farm workability of the measures and crop yields.

The map below shows the nine fields included in the testing of mitigation measures using cover crops and strip tillage. Potash and Far Hempsky are control fields under conventional cultivation methods. 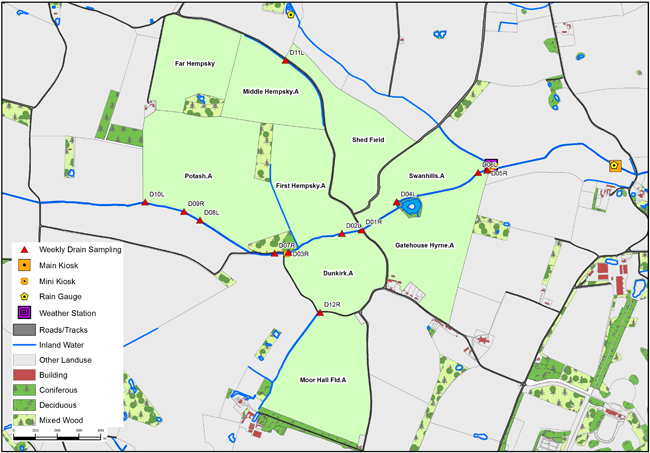 The photos below show the harvesting of spring barley at Salle in August 2013; straw incorporation post-harvest using the Lemken drill cultivator, and oilseed radish cover crop at the 5- to 6-leaf stage on 30 September 2013.

Over time upgrades were made to a number of the bankside monitoring sites. Suction lines to the peristaltic pumps and the corrugated protection hoses on the suction lines were replaced. All internal delivery pipes at the two high-specification kiosks at Stinton Hall Farm and Park Farm were replaced and easier access to these sites and the kiosks at Swanhills enabled with bridges and channel bank steps. The bridges include brackets for holding gauging rods to assist vertical water depth measurements for bed profiling, as well as for current metering during high-flows. The in-stream stilling wells housing pressure transducers for stage measurements were replaced with a 4-inch diameter stainless steel outer cover and an inner stake with adjustment slots. All work, including the design and installation of the bridges, was carried out by AT Engineering.

The photos below show the access bridge at Swanhills bankside monitoring site, and a view of the bridge platform showing brackets for holding gauging rods to assist bed profiling and flow measurements.

Salle Farms Co. provides much information on farm machinery, crop rotation, environmental farming and grain stores. There’s also a tab ‘Working with Science’ to explain the farm’s involvement with the Wensum Demonstration Test Catchment project. A gallery of photographs is added for interest, including photos from Visitor Days that feature the DTC water quality monitoring stations. ​​​​​

Who will benefit from this research?