When the show can't go on

Nothing can replace the rigours of rehearsal. But, writes Prof Steve Waters, who convenes the MA in Scriptwriting at UEA, its pleasures can be found in film and literature. 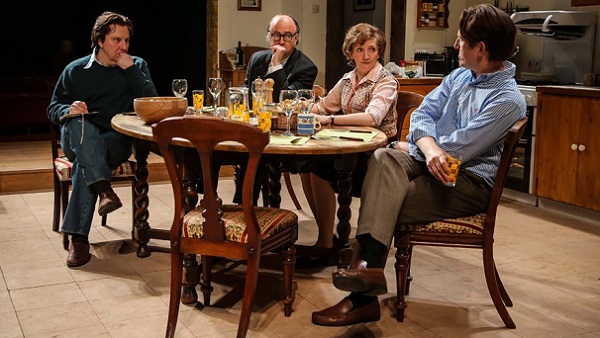 One of the minor side-effects of the Covid-19 pandemic is the serial cancellation of live theatre events, one victim of which has been the revival of my plays The Contingency Plan, scheduled to be staged at Theatre Clwyd in Wales and the Donmar Warehouse in London.

This isn’t quite as disastrous as it sounds – the performances have been ‘postponed’. But with lockdown and social isolation measures in place for the foreseeable future, live theatre in any form, like so many pleasures we take for granted – a decent cup of coffee, a good seminar at UEA, a visit to the library, a walk on the beach – seems to be indefinitely suspended.

I am, as they say, gutted. But what I’m really missing is the rehearsals I would have been part of right now. Rehearsal after all is the polar opposite of ‘social distancing’. In the closed enclave of the rehearsal room, actors, directors, designers, stage managers – and yes, writers – all hunker down to navigate the play. We share the same air, thoughts and questions, and think aloud together. I can think of no other social encounter like it – a Quaker meeting perhaps? A think-tank? A Select Committee?

Of course, there’s always the risk of being found out as an actor lifts their head from your script with a frown on their face, and an unforeseen question emerges. Yet I have come to welcome such moments. After all, there’s no substitute for a group of great actors burrowing into your lines, sounding out sense and sub-text. This process is the ultimate stress test for writing, rarely available in other media like film or radio.

Oh, and there will likely also be games (embarrassing, but fun), anecdotes (gossipy and name-dropping), tea breaks (where actors sidle up to you for illicit line-changes) and of course re-writes. And yes, there may be the odd display of ego, that’s to be expected. It’s oddly draining but always exciting.

But in the absence of either live theatre or living rehearsal, some of its pleasures can be found located elsewhere. There’s a wealth of literary engagement with theatre and its rituals; I’ve just finished Angela Carter’s exuberant exploration of illegitimate theatre Wise Children, which is a riot of incest, twins and Shakespeare. Beryl Bainbridge’s An Awfully Big Adventure from two years earlier, draws with real frankness on her experiences as a young actor at Liverpool Playhouse and is shockingly undeceived about the sexual dynamics of the rehearsal room. Another great post-war writer, Penelope Fitzgerald in her 1982 novel 'At Freddie’s', hilariously dissects the fly-blown and exploitative world of an acting agency for children, drawing on her experience at the Italia Conti stage school.

Theatre director Michael Blakemore in Next Season offers an acidic account of an actor’s experience of the Repertory system, with a thinly disguised portrait of his rival Peter Hall; and Margaret Drabble’s The Garrick Year incisively plunders her time with the RSC under-studying for Vanessa Redgrave in an account of provincial theatre that is wickedly astute. And this literature is global – think of Mikhail Bulgakov’s priceless satire on the working methods of Konstantin Stanislavski and The Moscow Art Theatre in his LOL-inducing Black Snow.

Then there’s film. For me the definitive fusion of film and rehearsal is the sadly difficult to obtain masterpiece by Louis Malle, Vanya on 42nd Street (1994), which documents a workshop of Chekhov’s great play in a derelict Broadway theatre under the tutelage of director Andre Gregory, and then alchemically transmutes into a piercing examination of the acting process with Wallace Shawn or Julianne Moore whispering David Mamet’s bone-dry translation directly into your ear. And frankly pretty much every film by Ingmar Bergman from Summer Interlude (1951) via Persona (1966) to his valedictory masterwork Fanny and Alexander (1982) lay bare performances and theatricality with his own shifting and mutable ensemble of actors.

Theatre’s processes defy change and COVID-19 forms a huge challenge to them; even as I am writing this, we’re exploring how Zoom and other technologies might reproduce some of the pleasures and impacts of rehearsal. As with seminars and teaching, something will be better than nothing. But what cannot be reproduced is shared warmth and tacit learning, those things that eventuate when fellow artists collaborate. It will come again, as will the show. And like so many things that return after these strange times, when it comes back we will feel its preciousness as never before.

But, for now, I will content myself with how great novelists and filmmakers have caught something of the fugitive pleasures of rehearsal – and I encourage you to do the same.