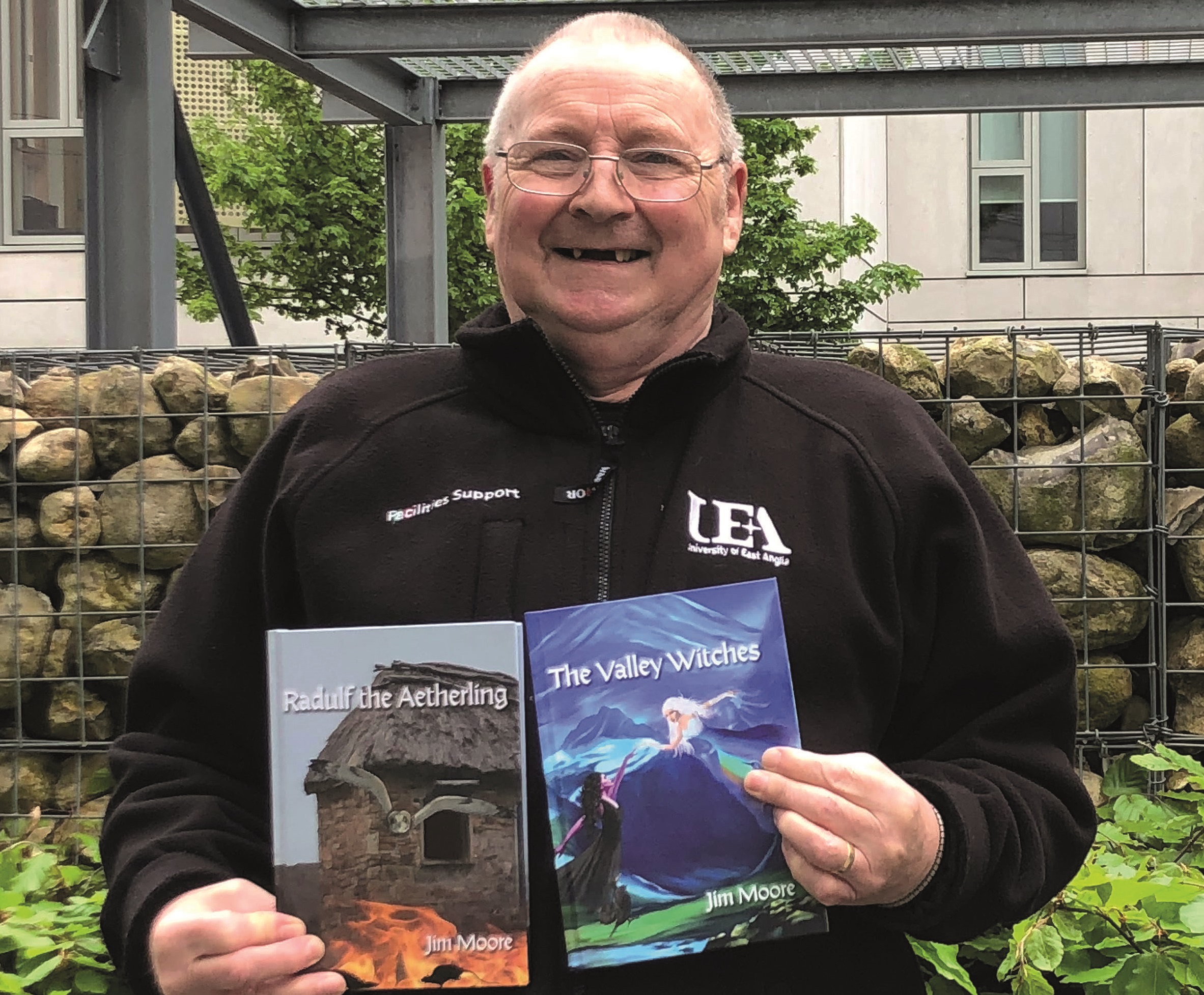 ​Jim Moore has led quite the life. Apart from anything else, he’s probably – almost certainly – the best cleaner-turned-children's author UEA has ever seen.

Jim’s second book, ‘The Valley Witches’, has just been published and is set in Norfolk, with UEA’s campus playing a prominent role.

Jim explains his pride at becoming an author, what his plans are for reading them to his grandchildren and the reason why £1 of every book sold will be given to charity.

I love visiting the quieter places on campus. One morning I was walking into work and saw a herd of cows amongst beautiful unspoilt countryside, it felt like I was in a time warp.

Jim Moore moved to Norwich in the late 1950s. The city he discovered was very different to the one many of us know today.
Cattle and horses were paraded in the shadow of Norwich Castle and, for a young boy who had moved from a built-up city in the North of England, a lifelong love affair with Norfolk’s wildlife and medieval history was born.

It is this love of our county’s nature and history which is the inspiration behind Jim’s latest book, ‘The Valley Witches’. The book charts the fictional migration of various animals across Norfolk and is the second story Jim has published, after he released his first, Radulf the Aetherling, in 2019.

Now 74-years-old, Jim has been part of UEA’s Cleaning team for thirteen years, having previously worked as a scaffolder and a cow herder. He now includes the role of author on his varied CV.

Jim describes the inspiration behind the books, his plans for reading them to his grandchildren, and his pride at fulfilling his lifelong ambition of becoming an author.

What are the books about?

The books are works of magical fantasy, based in present day Norfolk. There’s so much in there, from volcanoes and witches to Romans and wild beasts, and they’re full of drama and adventure.

I’ve tried to make them educational as well. For example, the characters visit all the historical sites of Norwich like the cathedral, the castle and Pull’s Ferry.
In the book, the kingdom that the animals live in is run by rats, who boast that they were brought to Norfolk by the Romans. A couple of witches fight for supremacy in the kingdom, and they introduce magical creatures of their own. The rats decide to get away from everything created by these witches, as well as the problems caused when a man-made housing development threatens their home.

By hook or by crook, the rats eventually make it to the ancient Roman town of Venta Icenorum, which is in Caister St Edmund.

What inspired you to write the books?

I had a stroke three years ago; luckily it was a minor one, and I was OK. However, I had some time to in hospital to think about life, and created a bucket list of things I’ve always wanted to do. One of them was to write this trilogy of children’s books.

Another thing I decided I’d like to do was to write my wife’s biography. So much has changed in both our lives, when I was born the NHS didn’t even exist!
Aside from my health scare, I’ve always had a keen interest in Norwich, and its people. I love exploring the city, and watching the world go by and noticing little pieces of its history.

I remember listening to the stories of people who had come back from the Second World War and being fascinated. It’s this inquisitiveness that’s helped me develop as a writer. Everyone has an interesting story and I believe we can all learn something from each other.

UEA’s grounds feature heavily in this book don’t they?

They do indeed. The characters in the book all come to UEA Broad, but are then spotted by a fisherman’s dog. A dramatic chase ensues, and the characters eventually find sanctuary near the river by Earlham Park Café.

The grounds are inspiring to write about. It’s surprising how much land the University is responsible for.

I love visiting the quieter places on campus. One morning I was walking into work and saw a herd of cows amongst beautiful unspoilt countryside, it felt like I was in a time warp. I wanted to walk through to the cows’ meadow, but they looked quite hostile, and I’m not as quick as I used to be!

That’s right, my wife and I have four children. We had five, however we lost a stillborn child in 1976. At that time, medicine wasn’t as advanced as it is now.
Nowadays, parents who suffer such tragedies are generally better cared for, and there are procedures in place for helping grieving parents. Norfolk Sands, which is a charity based at the Norfolk and Norwich Hospital, helps parents who have experienced loss and offer counselling to those who need it.

£1 from every book I sell will go the charity, to help other people who might be going through what me and my wife went through.

Have you got any special plans to read the book to your grandchildren?

Absolutely. Each of my grandchildren have got signed copies of the books, and now we’re able to meet up again outside. I’ll be dressing up as one of the characters, reading a passage out of the book, and having green paint poured all over me...don’t ask!

When all my grandchildren have read the trilogy, I’m going to organise a treasure hunt. A piece of treasure will be buried in the Yare Valley, and there are clues hidden within the books to find it. Thinking about it, I’ll have to get some consolation prizes for the grandchildren who don’t find it first, or life might become unbearable!
It will be a big achievement for me when I finish the trilogy of books. I left school at fifteen without any formal qualifications, so releasing three books is important to me. The books come from my head, my heart and the world I see around me.