Jon Conradi left UEA in 2002 with a BA in Philosophy and Politics. After graduating, he went on to forge a career in education – first teaching English, and then as a programme manager in business school environments.

All the while, Jon had a deep love of the natural world, and he subsequently went on to gain Postgraduate qualifications in biodiversity and sustainability. He is now looking to use these skills, and those developed in his career, on a new project – Mosaic. We sat down with Jon recently and he told us more about his fledgling rewilding business, why he’s launching a crowdfunding campaign, and what the benefits of rewilding are.

I want to take people on a journey into wildness and restore life back to land.

What have you been up to since leaving UEA?

I graduated in 2002 with a BA in Philosophy and Politics. After that I spent a couple of years teaching English in Japan which was wonderful in many ways. One of the particularly good aspects of that time was that I discovered I loved snowboarding, and it turned out I could cash in my pension in at the end, which I used to partly fund a season snowboarding in Canada.

However, I needed to fund the rest of the trip, and that was why I started a job in Birkbeck College and how I began my career in the education sector.

I worked there for a year and then moved to London Business School where I worked as a programme manager. I loved being in London and the international aspect of it. I loved the diversity of the community, and I enjoyed my work looking at student led learning. Student led learning was a really new idea and I was trying to create something which was really exciting.

I worked there for 10 years, but in the meantime I wanted to do more in the sustainability and social impact space. I ended up applying for Year Here, which is a social innovation programme that includes lots of practical work - so I spent a few months at Camden Council and spent a couple of months on a consulting project in energy with RePowering. I also spent time exploring new ideas, and this is where I came up with Mosaic.

Tell us about Mosaic.

Mosaic seeks to make rewilding more accessible. I want to take people on a journey into wildness and restore life back to land.

It gives people access to what I think is a really exciting concept – returning value to land for the life it creates rather than the life that can be extracted from it. There is increasing interest in the topic, but the conversation needs more nuance. We often see images of trees and nothing else, but we need to realise that it’s not just a tree – it’s a habitat, it’s part of an ecosystem, a whole interweaving web of life there that can come back and return. Seeing that is beautiful.

We have two other customer groups - one is landowners who are already interested in re-wilding and want to increase exposure and engagement with what they are doing.  The other group is landowners want to try re-wilding; maybe because of changing subsidies and unprofitable land on their estate, or maybe they’re interested in it. We will help them try out a couple of acres and go from there.

Do you think you’ll start off with clients who are already very eco-conscious? Or do you think you can start selling this on the basis of profitability and subsidies, right away?

I’m still exploring this. I’m currently talking to someone in East Anglia about piloting a project with a couple of acres of land. After this, we'll be able to better understand who the customers are. I think it starts with people who have some sense of what re-wilding is already, and then being able to build from there.

I’m currently on an incubator programme. Part of this is a crowdfunding campaign that will give me the ability to better understand who are the customers and how the business grows. And testing what the digital experience could look like.

So what would you say are the benefits of rewilding?

It’s about inspiring a different way of being in the world by reconnecting with life around us. It can change how we value land. Moving away from how it can be exploited, to how it can be a habitat for life and wonder.

It’s also about different ways of managing land and trying to work out where this fits for people. For some people, it's not going to fit. For some people, this is too small scale, they want to rewild hundreds of acres at a time to encourage larger species reintroductions.

For others, they’re very aware that they have a livelihood that's dependent on the land, and they want to pass it to their next generation. They might want to just give over a couple of acres and see what changes. It’s no great loss if that's all it is but it could be the start of something new. 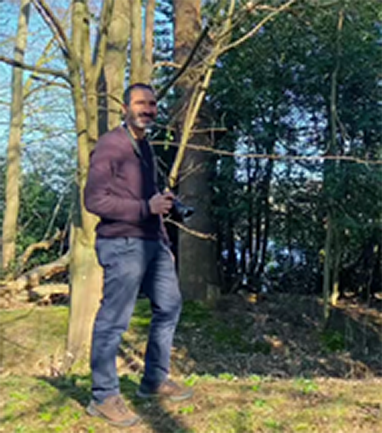 What are your favourite memories of studying at UEA?

I've always loved learning. Hearing about philosophical ideas and then being able to carry them around with you and see how they play out in the real world is just wonderful. Looking back, it's such a luxury being at university and having three years to think and play with ideas and talk to people about them. You can sit down with people and randomly start talking about Wittgenstein - which is not normally socially acceptable.

I loved being able to talk and share ideas and having these things spark - trying to work through the dense text of Heidegger and then suddenly having an ‘aha’ moment and seeing something fall into place or even the opposite – going through a big text, looking across and seeing that no one else is managing to comprehend it either.

And how about living in Norwich?

I enjoyed being on campus. Being on campus overlooking the lake and being able to walk around and immerse myself into a wider world of life was wonderful. And I think in a way that was maybe something I took for granted.

I also think Norwich is just wonderful, an undiscovered gem. You can walk everywhere, and it has everything you need. It starts to feel like ‘yours’ after a couple of years.

One of the things that I liked about UEA was that there was a strong international vibe, and that's always been important to me. I come from a multi-cultural background and to me that feels like home.

When you go on holiday do you prefer forests and mountains, then, as opposed to cities?

I still love snowboarding although I’ve not gone so much recently. It’s challenging in that it’s not the most sustainable of pursuit, but it is also one of the ways that I've I built a love for being outside and having a connection with natural processes. It also teaches you humility; being up in the mountains is very humbling and you get a sense of how small you are in the grand scheme of things.