As the world responds to the death of George Floyd, one of UEA’s longest-serving academics, Professor Chris Bigsby, recalls his experiences in the US on the day Dr Martin Luther King was assassinated.

An expert on the history and culture of the US and American literature, Prof Bigsby has written and edited more than 50 books, including The Second Black Renaissance about African American writing from mid-20th century (the book was dedicated to the memory of Maynard Gough, Julius Hamilton, Charles Martin, George McKinney, Sr., George McKinney, Jr., and Albert Miller, who died at the hands of the local police in Kansas City, Missouri). He established the American Studies course at UEA, and the Arthur Miller Centre and its International Literary Festival, through which he’s interviewed countless writers over the years, including James Baldwin, Alice Walker, and Toni Morrison. 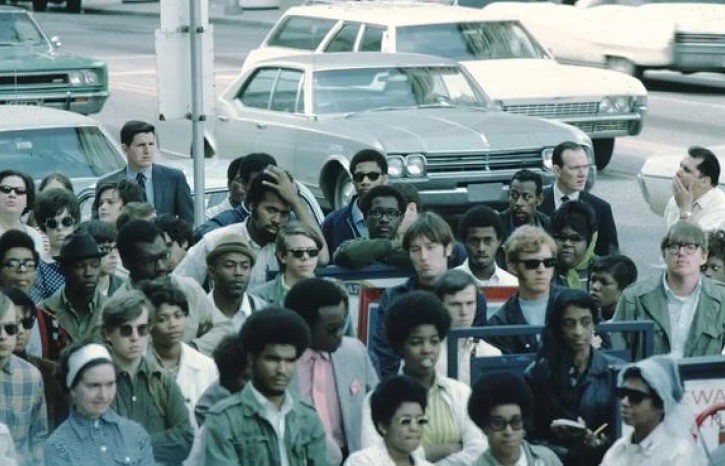 In 1968 I was teaching at a university in Kansas City when Dr Martin Luther King was assassinated. What followed were civil disturbances across America. I inadvertently broke the hastily-announced curfew since I was teaching a class that evening. What I then did was grab a tape-recorder and interview everyone I could get hands on from the mayor, chief of police and city manager to policemen and supposed rioters.

Kansas City straddles two states, with more in Missouri than Kansas. Thus I was teaching at the University of Missouri at Kansas City. This is a border with a history. Missouri was a slave state while Kansas was free, though attempts were made to undermine this. Pro-slavery forces invaded Lawrence, Kansas, while John Brown and his sons launched a murderous assault on those supporting slavery. Some attitudes perhaps don’t entirely disappear with time.

Following the assassination, school children on both sides of the border walked out of classes. On the Kansas side, where schools were closed as a gesture of respect, they marched peacefully in protest, watched over largely by black police officers. On the Missouri side, where schools were kept open, police drove out to the schools and sprayed mace over the children gathering outside. When the mayor, who, as a result of earlier scandals had no control over the police, invited the children to City Hall they were tear-gassed. I wrote a piece for The Guardian because a Kansas City Star photographer (I was working as a reviewer for the newspaper at the time) had taken photographs of two priests being beaten up by police. I found and talked to the policemen concerned and asked them why they had done this. They replied: “We didn’t know they were priests.”

In an attempt to cool things, a black radio station arranged for children to be invited to the basement of a nearby church to hear music. The police kicked the windows in, followed by tear gas canisters.

At least five people died in the disturbances, none of them armed. One was a black deputy sheriff, shot in the back while not in uniform. One was a man shot through his front door by a policeman. The other three died outside the Byron Hotel. One was a man sitting on a low wall who was ordered to stand up either by a policeman or national guardsman (it is not clear which) and then shot because another policeman/national guardsman thought he was a threat.

The other two to die were a minister and his 12-year-old son. The police story was that there had been sniping coming from the hotel and they were caught in the crossfire. I went to the hotel while tear gas was still lingering. It was clear the police story was false. The windows were all screwed shut because of the air conditioning units. The only broken window was the result of a police gas projectile which nearly hit a woman who, perhaps advisably, was reading her Bible. So what was the truth?

To my surprise, I was given access to police logs. What struck me first was a request to learn of the whereabouts of Stokely Carmichael, the radical black leader. Even more surprising was the speed with which his actual location was radioed back. He clearly had people monitoring his movements. This was of a piece with assertions that the disturbances had been caused by outside agitators even as it turned out that none of those arrested were from out of state. The main thing I discovered, however, was that police at the rear of the hotel were reporting sniping from the front of the building while those at the front were reporting firing from the rear. They were shooting at each other. There was no sniping coming from the hotel. I showed the reports to the chief of police whose response was to shrug. He was Clarence Kelley. In 1973, Richard Nixon nominated him to be director of the FBI.

What tends to be forgotten is that if there were riots in 1968 so there had been in 1967, with roughly the same number losing their lives, and with cities across America in flames. The result was the Kerner Commission Report, which found a nation ‘moving towards two societies, one black one white – separate and unequal.’ It also laid primary responsibility on the police and the inequality suffered by African Americans. It called for the recruitment of more African American police and noted that the disturbances (their preferred word) were not caused by, nor were they the consequence of, any organised plan or conspiracy. The report was published only shortly before the events of 1968 and I only met one person in Kansas City who had read it.

Things have moved on, though evidently not as much as we perhaps thought, and the Kerner Commission bears reading even half a century later as once again we hear of police killing un-armed black men, outside agitators, conspiracies, nervous National Guardsmen, while the president seeks to address the situation by calling for increased firepower to be deployed. Marcus Casey and Bradley Hardy of the Brooking Institution observed in 2018, ‘the report outlined concerns that are still relevant. Racial segregation remains the defining feature of many US cities; blacks face higher unemployment and lower wages; huge disparities in wealth persist at levels near those described by Kerner and his colleagues five decades ago.’

Burning buildings and looting are not a badge of honour. It was not those on the street, however, then or now, who struck the first match. Once Pandora’s Box has been opened it is difficult to control what comes out, though the only thing that remained in Pandora’s Box was hope. There is, though, a statute of limitation on hope.