'They want an end to racism and they want it now'

In response to recent events, Professor Anshuman Mondal, Professor of Modern Literature & Director of Research, writes about Black Lives Matter, racial justice, the limits of parliamentary democracy, and the 'close connection between a capitalist social order, with its emphasis on the inviolability of property rights, and racialization'. 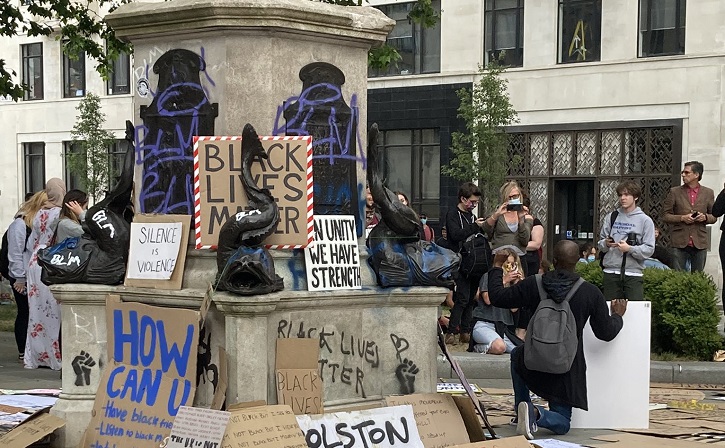 It has become a truism that we are living in the era of affective politics. Brexit, the election of President Trump, and the rise of populisms globally all testify to the political efficacy of mobilising emotions.

And yet it would be wrong to believe that before this was an era in which political endeavour was solely based on facts, deliberation and reasoned argument. Affective politics is as old as politics itself, especially in democratic societies. The politics of race and nation has often leveraged fear and loathing against ‘outsiders’, for example, and inculcated feelings of superiority and inferiority; likewise, anti-racist politics has long known the political value of moral indignation and outrage, as well as hope. The passionate BLM protests here in Norwich and all across the world stand in a long and honourable tradition of affective politics. They are a volcanic eruption of  radical, revolutionary and righteous rage at the institutionalised and systemic persistence of racism in countries across the world.

It was, of course, inevitable that there would be a backlash. The way in which that backlash has been expressed, the wider frequency of its registers, is truly illuminating. Principally, this has involved an opposition between reason (and reasonableness) and rage, between constructive/peaceful protest and counter-productive violence and “thuggery”, between “law and order” and “mob-rule”.

So, for instance, in the US we had President Trump’s egregious warning that “when the looting starts, the shooting starts” alongside Senator Tom Cotton’s aggressive call to send in the military to restore “order” on the streets of the US. In the UK, following the toppling of Edward Colston’s statue in Bristol, the Prime Minister’s spokesman said that “People can campaign for the removal of a statue but what happened yesterday was a criminal act and when the criminal law is broken that is unacceptable”. The Home Secretary called the act a “disgrace” and the Leader of the Opposition believes the statue "should have been brought down properly, with consent”; and then there is former Labour minister Lord Mandelson who “personally will not shed a tear for the statue” but who finds “mob-rule very disturbing…because that’s the law of the jungle isn’t it?” Somebody should point out to Lord Mandelson that, in the context of protests against racism it is not a good idea to compare the mainly black protestors to jungle-dwellers, which is itself a racist trope.

Inevitably, all this involves an admonitory and attention-deflecting genuflection towards an acknowledged “minority”, but the effect – whether intentional or not – is to partially (at the very least) delegitimise the radical demands that such political rage encodes. And now, with the announcement of a commission on racial and ethnic disparities set up by a political adviser known to be sceptical of key anti-racist concepts and who has a track record of antipathy to established anti-racist politics, along with the bi-partisan effort to give ‘war memorials’ legal protection, we are moving towards the inevitable containment and retrenchment.

It is obviously contradictory that some of the very people who had hitherto been very willing to mobilise political emotions for their own ends are now calling on the BLM protestors to be ‘moderate’, ‘reasonable’ and obey the rules of ‘democracy’, when they had so recently insisted that the will of “people” must be respected no matter how irrational, unreasonable, unrealistic or utopian it might be. Moreover, they insist on enforcing the ‘rules’ even though they were themselves prepared to break the rules in order to achieve their own political ends.

But the more significant point is that the triumph of populism represented by Brexit/Trump has taught us about the limited efficacy of reason to counteract the raw and visceral force of political affects such as moral outrage. Both those who have surfed the populist wave and those who never did now do not seem to understand how political emotions are pitched at a different frequency to the quiet deliberations of reason – the latter because they never have, and the former because perhaps they don’t see it as legitimate when mobilized by non-white protestors, as opposed to on behalf a largely ‘white’ constituency; or because they are falling back on the default alignment of ‘reason’ with ‘whiteness’ and unreason with blackness: a structure of thought that has a long pedigree in racial discourses.

However, the protesters don’t want yet more commissions on this or that aspect of racial discrimination, nor will they be satisfied with more ‘reform’ of policing and other apparatuses of institutionalised brutalisation against racialised minorities. Rather, their revolutionary rage, inchoate and raw as it is, voices the desire for a total break and transformation of the racialised social order. They don’t want improvement. They want an end to racism and brutalisation and they want it now.

This doesn’t mean that they won’t be willing to accept the necessary but insufficient reforms that will invariably be offered (probably just rhetorically) and which may just about lead to some barely noticeable improvement in the life experiences of black and other racially subordinated peoples. There is no hard and fast binary division between political emotion and political reason, and there are always ‘reasonable’ elements located somewhere deep within the anguished and utopian calls for deep structural change articulated by any oppressed group.

But the point I am making is that this revolutionary rage is demanding, first and foremost, an acknowledgement of their historical and continued pain, some recognition of the daily humiliation of being black or racially ‘other’ in countries that implicitly ground their sense of selfhood on ‘whiteness’. No ifs, no buts, no genuflections towards the “thuggish” minority, no counter-demands that insist they voice their anger in the way their masters deem fit.

Moreover, “law and order” is precisely what the BLM protestors see as being responsible for their pain. This much is apparent in the gross inequalities of the criminal justice systems of the US, UK and ‘First’ world nations, but it is important to remember that the “order” in “law and order" is a deeply, systemically racialized order that “goes all the way down”.

Indeed, as Tessa McWatt has argued in her beautiful, haunting and illuminating memoir Shame on Me: An Anatomy of Race and Belonging, today’s social orders are still rooted in what she calls the logic of the plantation. Those black and brown peoples who worked the sugar plantations and colonial estates of the world, and those indigenous peoples who were expelled and/or exterminated in order to make room for them to do so, have in a sense never stepped off the plantation and its ideological superstructure, and their overseers and masters have never stepped out of the plantation mentality on which they relied to assume their manifest destiny as, to use V.G.Kiernan’s resonant phrase, “the lords of humankind” – although it was, for much of that time, an open question to many of them whether those over whom they exercised their dominion were, indeed, human (and many evidently are still not sure even now).

It is telling that the appeal to “law and order” is made especially when property is damaged. For much of the last half a millennium, white supremacy has been based on the idea that black lives are white property, that the only legitimate place in the social order for black persons is as objects, not subjects. Which is to say, there is a close connection between a capitalist social order, with its emphasis on the inviolability of property rights, and racialization, in which black life is rendered violable. John Locke argued that the essence of the right to property is that the owner may do with or dispose of his (or her) property as s/he wishes. The daily violability of black life is rooted in this objectification as property, even now.

The police officer, with his knee on a black man’s throat, sees not a human being whispering, “I can’t breathe,” as he is asphyxiated of his right to life, but an object to do with as he pleases. A deep current of history runs through him as he administers the final, fatal squeeze. To those outraged by violence against property, whose disgust and outrage can be mobilised by the toppling of a single statue of a (white) man, when they have hitherto failed to be outraged (even now) by violence – systematic, organised, state-sanctioned, formal, informal – against non-white persons, I ask this: “what do you think it looks like to those whose rage is demanding recognition that black lives matter, when you stand up so adamantly for the rights of property and only half-heartedly stand up for them?”

Just in case they still don’t get it: it looks like you couldn’t care less.