TERRY EDWARDS GIVES A SHOUT OUT FOR THE SUPPORT BAND

The hip ones in The Higsons’ entourage bought tickets for the opening act who were completely unknown to me at the time. I was never that fast out of the gate. My interest in the gig was the headline act, a new incarnation of King Crimson featuring Adrian Belew on guitar. Belew had recently been playing with Bowie and his work on Talking Heads’ Remain In Light album was fabulous, so I was keen to hear him alongside Robert Fripp, Bill Bruford and Tony Levin.

Showtime was delayed, supposedly because of a problem with transport, though we suspected it had more to do with the 100th FA Cup Final going into extra time that afternoon than the wheels coming off the bus. The five-piece Lounge Lizards came on to an impatient packed house. From the off I was smitten with their self-styled ‘fake jazz’. Harlem Nocturne was their second tune. I knew the Earl Bostic version inside out. It was one of the reasons I’d hounded my parents for an alto sax. This was going to be a great night.

The main protagonists in the band were the Lurie brothers, John and Evan. The former was the alto-saxophonist and focal point, the latter hammered the piano. The music was immediately a guilty pleasure. Double bassist Steve Piccolo and drummer Anton Fier played their instruments brutally and thuggishly as the post-punk zeitgeist demanded - but jazz wasn’t meant to be this much fun, surely? Arto Lindsay was the guitarist on the LP but he didn’t tour Europe with the band. Danny Rosen was his replacement. Stylistically they were the same – fractious - but Danny and Arto sure didn’t look alike. 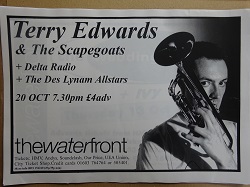 And so I became a Lounge Lizards geek. I sought them out when I was in New York at the launch of their Live At The Drunken Boat LP. Having met him in London, I called on Arto Lindsay who greeted me at the door of his apartment in Chelsea with, “Oh, you came round. No one does that in New York. How cool,” giving me the impression that it really wasn’t that cool - but then I had no choice in pre-cellphone days. After a couple of years in limbo, the band came to London and played 6 nights at the ICA with an expanded line-up featuring Roy Nathanson, Curtis Fowlkes and Marc Ribot. I went to at least 5 of the 6. Bracknell Jazz Festival too. Then there were the offshoots – Evan Lurie’s magnificent solo albums and occasional UK dates, same with Marc Ribot, both solo and with the Rootless Cosmopolitans.

Coincidentally, I’d met a native New Yorker in my first year at UEA whilst attending the Aldeburgh Festival as part of my music degree course, and her upstairs neighbour was Roy Nathanson. Nathanson’s Jazz Passengers – effectively the Lizards with the Lurie brothers replaced by other musicians and singers including Debbie Harry – became a draw at the Jazz Café and other concert halls. I went.

I like to think that the Venn diagram of my connections with the Lounge Lizards some 36 years later is impressive rather than obsessive. I got to play with Marc Ribot at a festival/symposium curated by Anthony Moore in Cologne and with the mid-period Lizards bassist Erik Sanko at auditions for Gavin Friday – even Jazz Passenger Debbie Harry at a Bowie tribute in New York! Try telling that to the 20-year old who got bitten by the Lounge Lizards bug completely by accident in 1981. Discipline were great too, of course. Another thoroughly memorable night at the LCR, but this one was both life-affirming and life-changing. 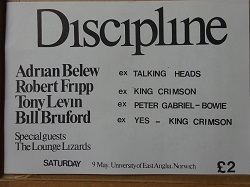 I guess the moral of the story is try to catch the support band if you can. You never know what might happen.