I remember very clearly the moment I decided that UEA was the university for me. Wandering around campus on a hot July day in 2013, I was drawn towards the Square by the sound of an acoustic guitar. Busking for the Open Day crowds wearing his signature hat, was the infamous Jonny Walker playing what felt to me like a setlist curated entirely from my iTunes library.

Looking across to the student union building I spotted two words that couldn’t have been more welcome. ‘Box Office’.

Stepping into the aptly box-like room, my eyes scanned the walls which were plastered top to bottom with gig posters. That’ll do me, I thought.

Norwich ticked all the boxes for me as a city to spend my early twenties. I grew up in a historic village that had held the record for most pubs per capita at one point in its life, and still maintains a thriving local music scene. I essentially chose a much larger version of where I was from.
Despite music being the driving force behind my move to Norwich at 19, by the time I reached 20 I was still holding myself back on the gig going front. Convincing my music loving friends to spend more than a tenner on a gig or venture away from campus in their first year was nigh on impossible, but I was incredibly nervous of going on my own. This meant 20 was not my best vintage for UEA gigs – that will be 21, but here are three stand out memories from that year.

This was busy for a Studio gig and the queue for the bar snaked back to the main floor space which was where I spent most of Funke’s support slot. The person in front of me was an imposing bearded man wearing some iconic dungarees (think more Dexys Midnight Runners than Rednex’s Cotton Eye Joe).

With the line showing little sign of movement, we got chatting and by the time I’d bought a pint I’d had his whole life story. And what a life it was. After some time busing it around America and opening a pub in Hong Kong, he’d found himself back in Norfolk with a bit of time and money on his hands. For the past couple of years he’d been picking up venue programmes and booking tickets for anything he liked the sound of, which is what brought him there that night.

Having eventually located the friend I’d arrived with, we found a spot near the front ready for the headliners. The confines of the Studio made for an intimate performance, and after a dance with the lead singer and a swig from their passing flagon of rum and coke (totally unhygienic I know) I was a convert. The post-gig adrenaline gave us more than enough energy for the hour long walk home.

I’ve seen this man and his band many times but this one’s in my top two and it was one of the rare gigs I went to on my own.

I knew Esme Patterson from her work with Shaky Graves and she was even more stunning solo. A lot of glitter was involved with Felix Hagan, who would go on to play in my mate’s living room as part of a House Tour eighteen months later – that was special. Frank, as always, gave it his all and I’m still yet to find a band that does crowd participation as well as he does. I was sceptical about the ‘wall of hugs’ but having parted the crowd and charged back to the middle, I ran straight into my friend Adrian. I wasn’t on my own after all. Frank’s next trick was to get his teenage cousins up on stage to challenge them to a crowdsurfathon. The route was off the stage, round the pillars, behind the sound desk and back to the other side of the stage. The crowd supported them all the way, egging them on until they reached the finish.

Now I’m technically 21 for this one but only just, and it was so special I had to include it here. I’d been a fan of Laura since I was 12 years old but never seen her live, and 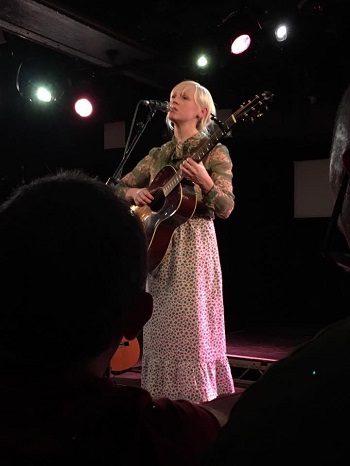 the same was true for a lot of my friends in the Live Music and Creative Writing societies.

We all met up before the gig in Jurnets Bar which was a revelation to many. Better pints than Wetherspoons and almost as cheap? Incredible. The gig was sold out and we crammed as close as we could to the front, eager to see the songstress that had influenced us all so heavily. Softly spoken yet witty, she gave a spellbinding performance that brought more than a few to tears.