Why you should never trust your heroes

Luke Turner on writing, market stalls and rolling up his gig posters to join UEA 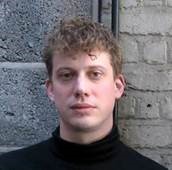 I arrived at UEA in the early autumn of 1997, a very strange time for music. As a teenager whose recent years had been consumed by the louche and arch sex-in-corduroys music from the likes of Suede (I was in the fanclub), Pulp and Elastica, Britpop's descent into the boorish, beery and blokey had depressed me no end. I'd chosen UEA in part because of the gigs that were going on in the city in the years before - there was no way I could have moved to London, the epicentre of everything, as I couldn't afford it and, besides, was far too wet behind the ears. Norwich however had seen all my favourites pass through in recent times, both to the LCR and Waterfront.

I rolled up my posters of Brett Anderson, Jarvis Cocker and co, excited to get them stuck up on the brutalist walls of Norfolk Terrace.

One of the great privileges of UEA is the presence of such a huge music venue on your very doorstep, just a few minutes roll along the walkways from bed. I imagine the first gig I saw there would have been Mansun in October 1997, one of the few groups maintaining the glittery end of music against the Adidas and lager invasion that happened after the tedious Blur Vs Oasis battle of late 1995. Halfway through my first year I started writing for the music section of Concrete, largely because I needed something to do during the endless downtime of the English literature degree. Engaging with my love for preaching loudly about music was a far more appealing prospect than spending hours stuck in the library trying to understand what Roland Barthes was on about, and anyway, it got me into gigs for free.

Looking back over the list of shows from that time though is quite a strange feeling. I was 18, pumped up on an obsession with all things androgynous in music, flouncing around the second hand shops of knackered old Magdalen Street in my flowery women's shirts, black nail varnish and DMs, but the music wasn't quite right. Somewhere down the A11 the drugs and the egos in the awful post-Britpop hangover had sent everything a bit weird, the music just wasn't quite as good as what had been going a few years before. Here I was, with one of the best venues in the country seconds from my bed, yet I was watching Bernard Butler's fairly trad guitar tracks rather than the randy attack of Suede. I convinced myself it was all brilliant at the time, of course... but now I can recall a sense of disappointment that the artists of the world were experiencing a bit of pre-millennial rootlessness.

Nevertheless, I did see some astounding gigs while I was in Norwich. We should take a second to credit the Waterfront here, where I saw an intense, beautiful show by post-Suede waifs Strangelove, and a set by Elastica launching their second album that was so loud and aggressive my friend swears it triggered a still-ringing tinnitus. Back at UEA I remember Primal Scream as one of strangest and heaviest gigs I'd ever witnessed. Back then, My Bloody Valentine's Kevin Shields was a mythical creature, his band's music sounding like it came from a planet made of leather and honey. I remember hearing their track You Made Me Realise for the first time at Nikki Colk of KaitO's club down Prince Of Wales Road, and then tracking down a copy at one of the stalls on Norwich Market that specialised in porn mags and vinyl.

Music was hard to find in pre-internet days. Seeing Shields up on the stage as he added a beautiful fury to Primal Scream as they played material from XTRMTR, their best album, was to our young and impressionable minds, like a visitation from a saint. Super Furry Animals too showed it was the Celtic Fringe that was making the best music against the Britpop bloat when they brought their quadrophonic sound system to the LCR - I remember working in the Concrete office during their sound check, and everything shaking loose. It was enough to forgive Gavin for booking those endless visits by ABBA tribute band Bjorn Again, especially when Mercury Rev conjured some Catskills mountains magic in a Deserters Songs gig in the spring of 1999.

The most amusing memory I had of LCR gigs though was when Morrissey visited on 21st November 1999. He was in an odd place then, on the way to rehabilitation but long before the depressing antics of later years, when he's become the Nigel Farage of barrel-chested British indie. Back then, Morrissey was still a hero to many of us, and two school friends came down from their universities at Manchester and Liverpool especially for it. We spent the afternoon in the bar and, pleasantly refreshed, went up to the gig only to find that the start had been postponed. Morrissey had apparently refused to do anything until the burger van that was always parked outside the LCR for gigs and clubs had been moved, and the smell of the singeing flesh had been wafted out of the building. Now, I loved that burger van, though I had been a vegetarian for much of my early time at UEA. In fact, the veggie burgers were particularly good, deep-fried as they were. By the time Moz came onstage we were all too drunk and tired, except my mate Rob who managed a stage dive and a grab at the singer's shirt. I watched Morrissey, whipping the microphone, sniffing dramatically, gesticulating earnestly and felt the booze swill around me. I really could have done with a burger before bed. Perhaps it was then that I learned you should never trust your heroes.