Echo & The Bunnymen January 28th 1983: The Cutter, Clearasil and when charts mattered 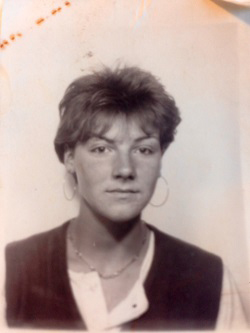 It was January 1983 and the album Porcupine, by Echo & the Bunnymen, was just about to be released and The Cutter was in the charts.

The charts mattered back then, well, to me anyway, in my last year of school aged 17. My love of the band fitted in with my quest to be seen to be “cool” in some way. Image was such an important part of those teen years, which always surprises me when I look at the horrific photos of myself back then. I looked anything but “cool” with my hennaed hair, eyes darkened by Kohl from Head in the Clouds and a face blighted by teenage spots badly camouflaged with Clearasil.

We’d seen a poster in the city in the St Stephens underpass announcing that Echo & The Bunnymen were coming so we cycled to the UEA to get our tickets and I counted off the days until we could see my first true crush, Ian McCulloch, sing for us. 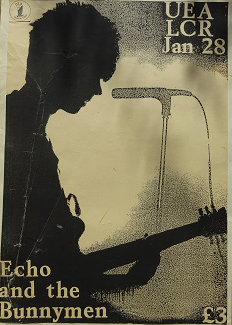 On the day of the gig my younger and slightly annoying sister Lucy (she cramped my style) and I met up at my best mate Claire’s house. Gathered in a poky bedroom onto the turntable of the enviable music centre went the singles Back of Love followed by The Cutter to get us in the mood for what was to follow.

I’d been careful to apply the Clearasil that day as I wanted to look my best for Ian, but the bright orange hue didn’t match my pale skin and I prayed that the LCR would be dark and applied more Kohl to compensate. I even remember what I wore that night – my grey collar-less brushed cotton shirt (it looked a bit industrial so I liked it), my black jeans which had been taken in to within an inch of my circulation’s life, and my fringed-creped-soled Sasha boots bought from Top Shop.

We arrived nice and early and took our places at the front of the queue. Our aim? To get as physically close to Ian McCulloch as we could: we wanted that front row spot.

Once the doors opened Lucy and I ran to the front whilst Claire, the only one legally able to buy a drink, hotfooted it to the bar. She returned with our lager in flimsy plastic cups and we waited.

Now, I have absolutely no recollection who the support was (or if even if there was one). After what seemed an age the drummer from the Bunnymen, Pete I think his name was, walked on first to a round of applause and cheers followed by Will Sergeant and then… there he was…Ian ”Bee-Stung-Gorgeous-Lips” McCulloch.

The crowd erupted and pushed forward – the stage cut into our torsos and the people behind forced themselves up against us. I didn’t look round as I couldn’t take my eyes of Ian’s face. It’s hard to explain the absolute thrill of seeing your crush in front of you when you have perhaps seen him on the Tube* on a Friday night or on Top of the Pops if you were lucky, praying that Legs & Co would dance to something else. They rattled through the hits from Crocodiles and then showcased Porcupine.  The crowd surged forward once more when the Cutter opening bars kicked in – I still didn’t look round. Then, a moment I won’t forget: Will Sergeant stepped forward to take a sip of MY lager, which I had perched on the stage for safekeeping. I wiped the rim – I didn’t fancy him. And Ian was too busy being the God he was to even look down…