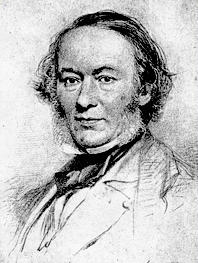 Richard Cobden (1804-1865) was born at Dunford, near Midhurst, Sussex on 3 June 1804 and died in London on 2 April 1865. Educated locally and at a boarding school in Yorkshire, he worked in his uncle's London warehouse before becoming partner in a calico-printing works in North Lancashire. He was a keen student of history, economics, literature, and foreign affairs and also an enthusiastic traveller, visiting France, the United States, the Mediterranean and Levant between 1833 and 1837. His career was lastingly shaped by a clear set of political ideas which he first set out as those of 'A Manchester manufacturer' in two tracts England, Ireland and America (1835) and Russia (1836). These above all contained a critique of British foreign policy as pursuing goals which benefited the court, the services and the aristocracy but burdened the people with a legacy of excessive taxation to finance profligate military adventurism. Against the grain of traditional British diplomacy, and a strong current of popular Russophobia, he suggested that the expansion of Russia at the expense of the Ottoman Empire would benefit commerce and civilisation.

However in the late 1830s, Cobden's concerns became local rather than global as he became deeply involved in Manchester's cultural life and radical politics. For example in 1836 he organised a series of lectures on phrenology by George Combe, and took up the cause of national education through which he first met John Bright, forming a lifelong friendship and political partnership. Above all, in 1838 he became 'Alderman Cobden' of Manchester, having played a leading part in the movement for the incorporation of Britain's leading industrial town, hitherto governed by the court leet of Sir Oswald Mosley. Cobden's attack on what he saw as the local example of feudal governance was followed by his taking up the leadership of Manchester's campaign against the Corn Laws, which he saw as the outstanding bastion of aristocratic self-interest within the British state. Through the Anti-Corn Law League he set out not only to rid Britain of the Corn Laws but to shape the identity of Britain's entrepreneurs as a new social and political elite.

This campaign consumed Cobden's energies between 1839 and the eventual repeal of the Corn Laws in 1846. Having married Catherine Williams (1815-1877) in May 1840, he became MP for Stockport in 1841, enabling him to spearhead the anti-Corn Law campaign within Parliament. However, he also led the extra-parliamentary agitation, especially as an orator, but also working alongside friends such as George Wilson, Henry Ashworth, and Bright to make the League machine the most formidable single issue pressure group in nineteenth century politics. Cobden himself became lastingly associated with free trade which he believed would maximise popular welfare and create bonds of peace between nations, part of an optimistic view of divine harmony which he shared with continental liberals such as Frédéric Bastiat. This campaign was triumphantly successful with the repeal of the Corn Laws in June 1846, with Peel ascribing his own conversion to Cobden's influence. But success had come at the expense of Cobden's health, never good, and his business which he wound up in 1847, leaving him largely dependent on a series of testimonial funds raised by his friends.

After repeal, Cobden undertook a lengthy tour of Europe in 1846-47, travelling from Spain to Russia as the 'apostle of free trade' hoping to convert the peoples of Europe to its material and diplomatic benefits. Any such benefits were soon cut short by the Revolutions of 1848 and Cobden's main concern by the late 1840s was increasingly that of peace. He played a leading part in the international peace congresses, 1848-53, campaigned against loans for standing armaments, and in 1849 urged the British government to adopt compulsory arbitration in international disputes. Cobden also unsuccessfully took up a series of domestic reforms, especially for secular education (which he had admired in the United States), and financial reform. But the effectiveness of these campaigns was undermined by the relative indifference of the cotton lords who had enthusiastically supported repeal. But it was British foreign policy which preoccupied Cobden as Britain drifted into the Crimean War, a war which Cobden deeply opposed, and which led to a defiant parliamentary battle against Palmerston as the epitome of an interventionist British foreign policy.

Cobden now became preoccupied with explaining why Palmerston had gained so much support and in order to counter this helped set up the pro-peace Morning Star daily newspaper in 1856. But in that year Cobden suffered a deep personal blow with the death of his fifteen-year-old son in Germany. Politically he had become increasingly isolated from his erstwhile supporters. This culminated in his defeat at Huddersfield in the election of 1857 (having declined to stand for the West Riding of Yorkshire which he had represented since 1847). Tempted to withdraw from public life, he now retreated to his Sussex home, Dunford House, though in 1859 he revisited the United States, in part as a result of his own ill-timed investments there.

On his return, having been re-elected to Parliament for Rochdale, he declined to join Palmerston's cabinet. Even so in late 1859, the danger of panic-fed war between England and France encouraged him to take up, on Palmerston's behalf, negotiations which led to the Anglo-French [Cobden-Chevalier] commercial treaty of 1860. This involved lengthy detailed diplomacy in Paris and a good working relationship with the Emperor Napoleon III. It stimulated a series of commercial treaties binding Europe into the nearest it got to a common market before the late twentieth century. If commerce was for Cobden the best way to peace, he also continued to urge arbitration treaties and the reform of international, especially maritime law, a pressing issue with the onset of the American Civil War in which Cobden was anxious to prevent British intervention. This theme dominated Cobden's last years as he attempted to educate the public through his writings, especially his important tract The Three Panics (1862) and to influence parliament through his vehemently anti-Palmerstonian speeches before his untimely death in April 1865.

At his death, Cobden was widely recognised by continental Liberals as the model of a 'European' statesman and as 'The International Man' while in Britain he epitomised the ideas of the 'Manchester School'. Despite the negative connotations of the latter as a philosophy of laissez-faire, his influence was a constructive one, shaping a domestic creed of political and economic reform. His internationalism inspired a generation of liberal and socialist statesman and thinkers, such as Gladstone and J. A. Hobson in Britain and Bernstein in Germany. The Cobden Club, set up in 1866, was devoted to the defence and diffusion of his ideas, while many of his supporters remained influential within the British Liberal party and abroad, for example, David Wells in the United States or Henry Parkes in Australia. Interestingly two of Cobden's daughters played an active part in public life, seeking in different ways to perpetuate their fathers' ideas. Jane Cobden-Unwin (1851-1947) was a leading suffragist and free trade publicist, while Annie Cobden Sanderson (1853-1926), was a leading socialist and one of the first militant suffragettes to be imprisoned in 1906. More widely, 'Cobdenism', the creed of free trade, peace, and international co-operation, was profoundly influential in British politics until the First World War. Interestingly by the late 1920s, Cobden's home, Dunford House, had been transformed into a conference centre devoted to diffusing his ideas. Those ideas, especially on foreign policy, continued to epitomise those idealists, or in A. J. P. Taylor's term, 'Trouble Makers' whose dissent from official foreign policy remained a dominant tradition within British radicalism until the 1930s.