It was created to offer patients a realistic and routine first-line treatment, combined where appropriate with medication which traditionally had been the only treatment available before. Evidence shows this stepped care approach can save the NHS up to £272 million and the wider public sector will benefit by more than £700 million.

The programme began in 2006 with Demonstration sites in Doncaster and Newham focusing on improving access to psychological therapies services for adults of working age and testing out the stepped care model in action. In 2007, eleven IAPT Pathfinders began to explore the specific benefits of services to vulnerable groups. The original Implementation Plan of 2008 and related documents can be viewed here and on our IAPT history timeline. Two important published 'stock takes' on progress were: 'Realising the Benefits' (2010); and 'IAPT: 3 Year report; the First Million Patients' (2012). From 2011, the programme's focus has broadened, following publication of Talking Therapies: a four-year plan of action, one of a suite of documents supporting No Health Without Mental Health, the cross-Government mental health strategy for people of all ages.

We provide a learning and support tool for services, trainees and training providers; as well as those wanting to learn more about the history of the IAPT programme and includes a directory of local IAPT NHS Services offering psychological therapies for conditions including depression and anxiety. In the video below, Professor Ken Laidlaw discusses the aims of the IAPT programme with Kevin Jarman, IAPT Programme Manager 2008-15 and Work and Health Joint Unit DWP/DH Lead:

Doncaster and Newham became the two national IAPT demonstration sites in 2006.  Their mission was to test the effectiveness of providing significant increases in evidence-based psychological therapy services to people with common mental health problems of depression and anxiety disorders.  Their aim was to improve health and well-being and either to keep people in work and joining in community activity or to return them to it.

Doncaster provided enhanced access to low intensity Cognitive Behavioural Therapy (CBT) interventions.  Case managers were supervised by a psychological therapist.  Referrals were received from a range of primary and community settings (including  GPs, Job Centre Plus and employers) and services were provided both in primary care and at the team base. In 2006-07, Doncaster developed a comprehensive stepped care model of psychological therapy provision, including frontline services provided by case managers supporting over 4,500 people.  Further information is available in the Doncaster Report and Doncaster organisational model paper.

The service was delivered by CBT-trained therapists and provided either in the individual's practice or in a local treatment centre.  Local employees accessed the service to help people stay in employment.  The programme was complemented by increasing access to Employment Coaches provided by Mental Health Matters.  In 2006-07, Newham treated an additional 800 people, developed culturally sensitive CBT interventions and a further 600 people were supported in seeking return to work.  Further information is available in the Newham Report.

The Department of Health first extended the Improving Access to Psychological Therapies (IAPT) programme in 2007-08, supplementing the early successes of the two IAPT Demonstration Sites Doncaster and Newham. This page explains the background to that period of development and provides links to related documents. Three-quarters of the country's primary care trusts wanted to join the Pathfinder stage of the IAPT Programme and half sent in a fully-worked up bid. Funding was limited and eleven were chosen to take part. They used service redesign techniques to develop:

Each Pathfinder site also identified an interest in addressing the specific barriers and positive benefits for improving access to psychological therapies for particular sections of their local population. Experts were invited to support these Primary Care Trusts (PCT) through special interest groups offering advice and support for the needs of the specific sections of local communities.

The PCTs and the special interests were:

Below, you can read more about the pathfinders specification, commissioning and evaluation of the programme.

The IAPT services can be found by searching on the NHS Choices website.

You can choose to search for a particular location by postcode or location. The site shows feedback on the service and also its reliable improvement rates and waiting time information.

Download The Which Talking Therapy guide produced by the IAPT programme through the link below.

The Which Talking Therapy guide

The National Institute for Health and Clinical Excellence (NICE) recommends a range of psychological therapies to treat people with depression and anxiety disorders and bring them to recovery. It also recommends these therapies are used to provide a system of stepped care.

Stepped care models standardise systems and procedures with an explicit aim of improving efficiency. If someone has depression, low mood or an anxiety disorder, they should have access to a National Institute of Health and Care Excellence (NICE) approved Cognitive Behavioural Therapy (CBT) treatment in a stepped care model first before other forms of intervention are used that may be less efficacious and take longer to derive benefit. It directly reduces waiting times and increases the numbers of people who can access at any one time. The recommended option within a stepped care model should be the least restrictive of those currently available, but still likely to provide significant gain in improvement of the presenting problem for the person. The stepped care model is also self- correcting, so if a higher intensity of intervention is required the patient can be supported to access this in a timely way. The definition of ‘least restrictive’ may refer to the impact in terms of cost and personal inconvenience, and well as referring to the amount of time required to support the treatment (treatment intensity). In stepped care, more intensive face to face treatments are generally reserved for people who do not benefit from simpler first-line treatments first. The two models of stepped care are pure stepped care where the majority of patients receive a low intensity intervention first and stratified. The two pilot sites each tested a model of stepped care. 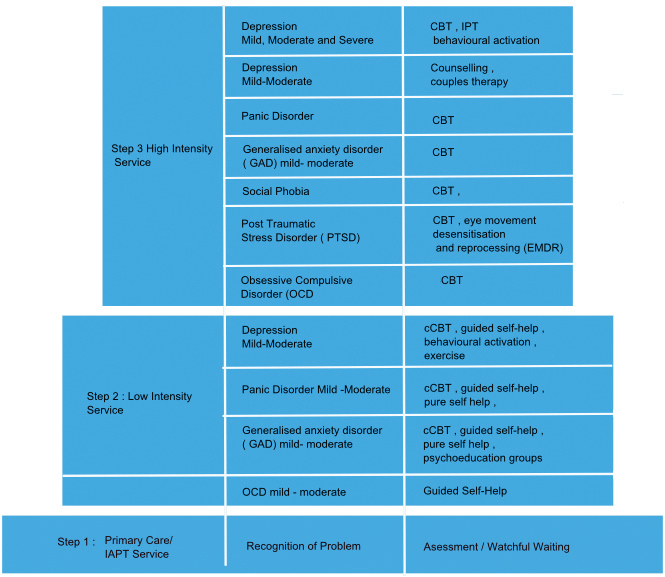