Through the Unlocking the Archive project, the research of UEA academics Professor Matthew Woodcock and Dr Tom Roebuck has enabled Norfolk's early modern printed books and manuscripts to become new sources of cultural, creative, and educational benefit in the East of England.

That early modern learned books were not only read, but indeed were fiercely and passionately debated by those of differing scholarly, political, and religious affiliations, is one of the key insights of Dr Roebuck’s research.

The project began in 2015 by addressing a problem: the Norfolk Library and Information Service has a collection of around 2,000 early modern learned books from which it was deriving no active benefit. By drawing on research into the early modern learned book, a template of strategies was created to tackle this problem. Unlocking the Archive has since expanded to work with the National Trust’s Blickling Estate, Norfolk’s graphic design community, and Norwich’s schools.

Norfolk Heritage Centre holds a collection of around 2,000 early modern learned printed books with origins in the Norwich City Library, the first provincial civic library outside London (founded in 1608). Despite the collection’s significance, the books were rarely used – the collection is difficult to interpret for non-specialist audiences, and its books are not literary masterpieces famous today. Instead, they are the works of early modern scholarship, tailored to clergymen, written mostly in Latin. Realising that Dr Roebuck’s research into these kinds of learned books held the key to revivifying this collection, in 2015 UEA academics (supported by UEA’s Medieval and Early-Modern Research Group) founded the Unlocking the Archive project. They created a template of activities to interpret this collection for the public for the first time, at the heart of which were live, hands-on, drop-in, ‘book discovery days’, where members of the public could turn the pages of these learned books and discover their stories.

Putting learned books at the heart of Norfolk's community

Events held at Norwich Library between 2015 and 2019 prompted the Library Service to invite the project to bring its template of activities to King’s Lynn Public Library, home to another neglected collection of around 2,000 learned books. These events prompted changes in people’s perception of their own region’s history.

Even deeper and longer-lasting benefits have been felt by the institution and its staff. Training workshops communicating Dr Roebuck’s research insights to the library’s staff have catalysed professional development, enabling the previously unused rare books to be integrated throughout the library’s work.

With the reputation of the project’s work in the region growing, National Trust’s Blickling Estate invited the project to bring its template of activities to its library in 2018. Despite being home to the Trust’s largest and most significant library (around 12,500 volumes), Blickling faced similar or even greater challenges to those of Norfolk Libraries and, despite ongoing vital work to catalogue the library, the books remained hard to integrate into daily visitor experience of the property.

Between 2018 and 2019, around 1,250 people attended Unlocking the Archive activities, and in 2019-20, the project trained 36 Blickling volunteers and staff members in the fundamentals of Dr Roebuck’s research in the learned book through a mixture of in-person sessions and online resources. Volunteers were able to lead their own unique ‘book discovery day’ in 2019, presenting the books to 450 visitors. 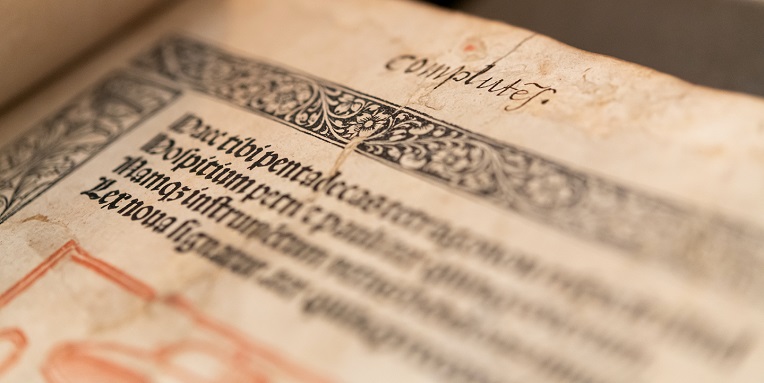 In 2015, Norwich graphic designer Darren Leader was hired to design a visual identity for the project and became inspired by Dr Roebuck’s research into the learned book. This led him to organise a project, ‘New Impressions: Redesigning Norwich’s Renaissance Books’ (2017), in which 16 Norfolk-based graphic designers took part in a hands-on workshop about Norfolk Heritage Centre’s learned books led by Dr Roebuck.

This influenced their creative practice, when they produced prints based on what they discovered,. This project offered a unique opportunity for commercial design professionals, usually in competition, to come together as a community. The resulting exhibitions at the Heritage Centre and Norwich School’s Crypt Gallery, seen by around 700 visitors, showcased Norwich’s design community.

Professor Woodcock’s research has shown that seemingly dull manuscripts − often in the form of lists or other non-literary records − can provide valuable insights into the ways a city like Norwich used drama and festivity to establish and project its own political, economic, and religious identity, celebrating civic pride and confidence.

Using Norfolk's manuscripts to enhance and invigorate teaching in schools

Meanwhile, Professor Woodcock was extending the scope of the project by using his research on Norfolk’s archival documents to shape curriculum development in Norwich’s schools, developing an educational pack, 'Putting on a Pageant'. This allows primary school children to explore the records of Elizabeth I's 1578 visit to Norwich in an accessible and exciting format, providing a new resource to teach core subjects and skills in National Curriculum Key Stages 1 and 2.

Before COVID-19, Unlocking the Archive’s national significance had been recognised. Its collaboration with Norfolk Libraries was highlighted in Arts Council research as one of three leading exemplars of collaboration between universities and public libraries nationally, as a result of which the project was asked to share its learning with a wider public library audience at a Carnegie UK Trust 'Engaging Libraries' event in November 2019. When COVID-19 paused all in-person activities at its partner institutions, the project launched a new digital resource, Discover Historic Books, using Dr Roebuck’s research insights to present key learned books from each partner’s collection to the public with a uniquely immersive user interface.