The troubled little sister of crime fiction, domestic noir has in recent years seen an explosion in popularity with novels such as The Girl on the Train by Paula Hawkins selling more than 15 million copies.

Since the emergence of crime and thriller fiction in the 19th century, multiple subgenres have evolved with much blurring between them. Recently, Domestic Noir, itself an offshoot of the psychological thriller, has all but eclipsed the other crime fiction subgenres in terms of popularity and social relevance, and is the focus of a forthcoming collection of essays co-edited by Sutton and Dr Laura Joyce, Domestic Noir: The New Face of 21st Century Crime Fiction (Palgrave; London).

Compared to the vast numbers of police procedurals, high concept thrillers and forensic-based novels available Domestic Noir has something different, darker and more intimate to offer. As most actual crime is itself domestic, work in this vein encompasses not just, sadly, some reader’s realities, but also, pertinently, their fears. Its dramatic, provocative storylines about things-that-matter, life and death situations for instance, often have broader and more immediate appeal than perhaps more observational and slower-paced literary fiction.

In Domestic Noir, protagonists are invariably not detectives but perpetrator or victim - or both. Novels contain dark, psychologically twisted plots with flawed and damaged characters and unreliable narrators. Events, viewed through the domestic lens of family, relationships and the home, soon spiral out of control and as everything unravels, of course, all is not what it seems… The genre is grounded in shifting perceptions: truth and lies.

"Crime fiction sometimes carries a reputation as gratuitous, or of being purely entertainment, but to be truly gripping crime writing relies on craft."

If traditional crime writing is about re-establishing order, Domestic Noir, and it’s closest literary originator, Noir (as created by the likes of James M. Cain and Jim Thompson), then is about chaos – the perceived order begins to unravel as the plot progresses, unsettling the reader’s equilibrium. Things spiral out of control. Noir operates in a different way to more straightforward crime as it can blend many sub-genres together: thriller, horror, science, psychological suspense. As such, Sutton argues, it’s particularly challenging to write.

“You have to consider deeply the plot, and central motivations,” Sutton notes. “Crime fiction sometimes carries a reputation as gratuitous, or of being purely entertainment, but to be truly gripping crime writing relies on craft – plot, character, tone and fluency of the writing. And then bringing all these together.”

Rather than working towards a happy resolution Noir more often leaves you questioning the fabric of the everyday. “Dark endings are more true to the literary aesthetic,” comments Sutton. “Yet noir and psychological suspense writers are of course writing for a readership and, ultimately, aiming for entertainment. Well-crafted novels aren’t necessarily taxing.”

Henry Sutton, Senior Lecturer in Creative Writing at UEA, not only teaches writing crime fiction and creative writing more generally, from undergraduate to postgraduate level, he lectures on critical analysis of crime fiction, is creator and director of one of the world’s first standalone MA’s in Creative Writing Crime Fiction, and founded the thriving ‘Noirwich’ Crime Writing Festival. He’s also a well published author of the genre himself, writing what he calls East Anglian Noir – domestic noir tales set on the Norfolk coast.

Crime fiction, is extremely vibrant in the UK, US and Australia right now, across Europe, and is becoming very popular in the rest of the world; notably India, Nigeria, South Korea, Japan, Brazil, and China,” says Sutton. “I established Noirwich four years ago to celebrate all that is noir, to create an international community of crime writers, readers and experts, and it’s since gone from strength to strength.”

The crime writing literary festival, located in Norwich, UNESCO City of Literature has certainly grown in popularity with over 1650 people attending in 2017 to hear from stars such as Val McDermid, Anthony Horowitz and Leye Adnele, speaking about their work.

Sutton, Dr Joyce, teaching fellow Tom Benn, are particularly interested in crime writing from the perspective of both the writer and reader/critic. They believe a better critical and theoretical understanding will improve their creative writing, while also aiding their critical understanding.

It’s a holistic approach to teaching that doesn’t end at the classroom door. Being at UEA enables students to ground writing in realistic detail and experience through access to a variety of other specialists from forensic scientists, psychologists and criminal lawyers, through to pathologists at the nearby NNUH teaching hospital.

"We've had lively discussions on blood spatter analysis," laughs Sutton. "Tapping into all of this expertise on campus, helps give an authenticity to the writing. The crime readership is expansive and discerning. They won't accept writing if it doesn't feel authentic, or if the author makes a factual mistake." 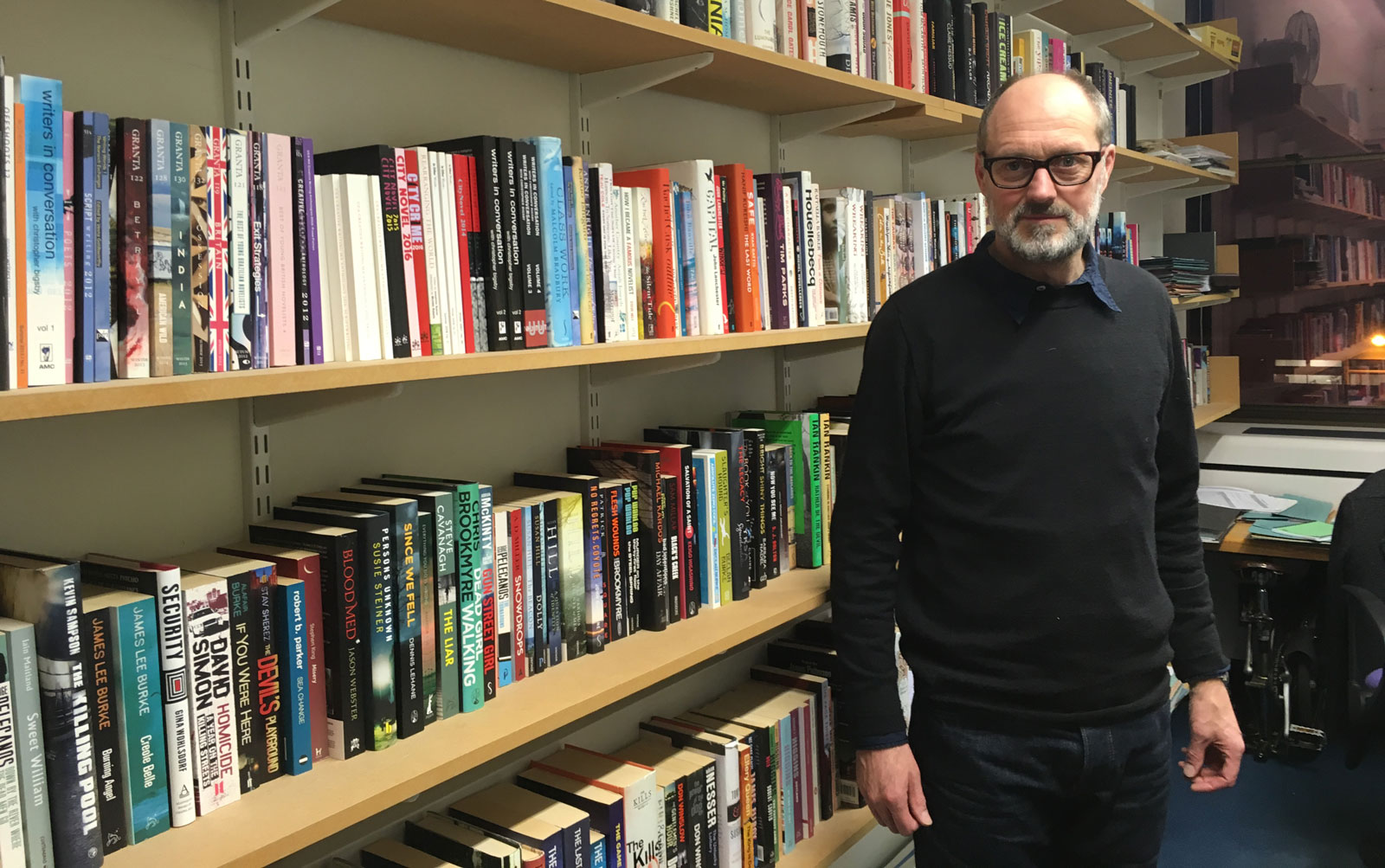 The part-time MA provides students with the opportunity to write a novel whilst guided by award-winning crime writers and experienced creative writing tutors and also includes visits from literary agents and editors plus a masterclass from leading crime writers such as Ian Rankin, Denise Mina and Lee Child.

On the course, students work on the craft of writing: character, plot, pace and the skill of getting the structure right, whilst allowing the story to breath and evolve.

“Plot is really key for crime,” Sutton explains, quoting Jim Thompson, who said: “'There is only one plot — things are not what they seem'; but it is the writer’s craft which pulls everything together.” 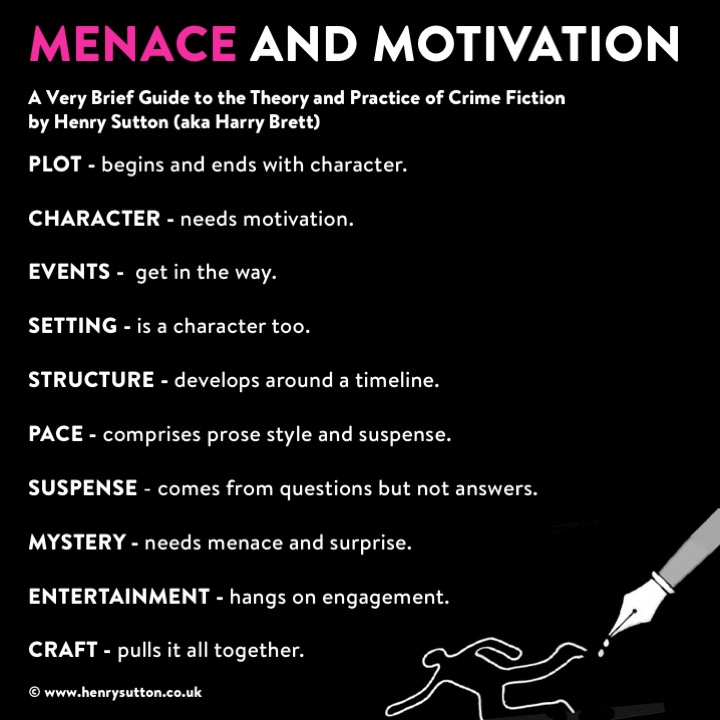 The first intake of the MA Creative Writing Crime Fiction course has recently completed and has already produced some potential new stars, such as Harriet Tyce, who’s highly anticipated debut thriller, Blood Orange comes out in January 2019, and other recent graduate, Merle Nygate, who won the inaugural Little, Brown Award for crime fiction with her "outstanding" espionage novel, A Righteous Spy.

Sutton also highlights the benefits of bringing crime writing techniques to creative prose writing more generally – a subject he has taught for over 10 years. Recent graduate of the UEA Creative Writing MA Prose Fiction, Imogen Gower Hermes, was quoted in The Bookseller saying how good it was to be mentored by Sutton in particular as he was, “really big on motivation and plot and none of this atmospheric, wishy-washy nonsense, just ‘what is happening and why?’”.

Hermes’ dissertation whilst at UEA gained distinction and was awarded the Curtis Brown Prize before being developed into her highly acclaimed début novel The Mermaid and Mrs Hancock, published in 2018.

It’s going to be another busy year for Sutton for he is certainly prolific. Following the last year’s publication, Domestic Noir: the New Face of 21st Century Crime Fiction, co-edited with Dr Joyce, Sutton is undertaking research with Dr Nathan Ashman, for a new collection of critical essays looking at ‘seaside noir’, with contributions from writers and academics around the world.

To complement the critical work there is of course the creative. The follow up to his 2018 novel Red Hot Front (described as ‘The Godfather in Great Yarmouth’ by Ian Rankin), Good Dark Night, written under the Sutton’s alter ego Harry Brett, will be published in November, 2019. Sutton is now working on a new series for Swiss/German publisher Kampa Verlag, the first novel of which, The Hotel Inspector, will be published in spring 2020.

And of course, there’s the return of Noirwich for its sixth outing which is sure to be bigger and better than ever before. “We’ve got some fantastic authors lined up themed around place, the environment and criminal interpretations ecology,” promises Sutton. Watch this space. 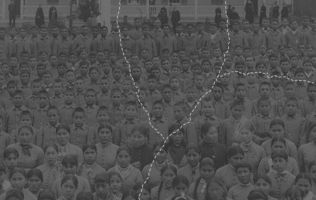