The world’s leading democracy is falling behind on electoral integrity, according to new findings from the University of East Anglia (UEA) and the Royal Military College of Canada/Queen’s University.

Electoral integrity in the United States of America is ranked 15th of the 29 countries in the Americas and is the lowest-ranked liberal democracy. The main areas of weakness in the USA are the drawing of the electoral boundaries, the results process, campaign finance and voter registration. 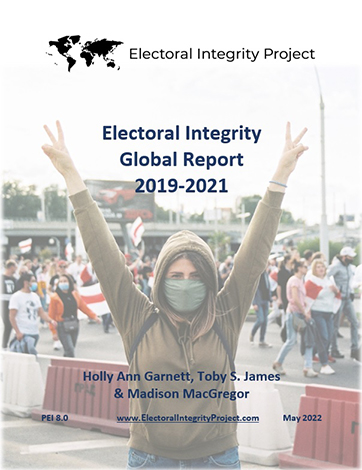 The report released today by the Electoral Integrity Project (EIP) evaluates the quality of elections worldwide.

Drawing on the Electoral Integrity dataset release 8.0, the report reveals which countries have the strongest elections, as well the parts of the electoral process where there are problems.

Further findings include:
-    Elections ranked the highest in the world in Finland, Sweden and Denmark
-    In Africa, Cape Verde has the greatest quality of electoral integrity
-    Taiwan, Canada and New Zealand are ranked first for their respective continents
-    Electoral integrity in Russia has seen a further decline, following the 2021 parliamentary elections. Only Belarus ranks lower in Europe.
-    Globally, electoral integrity is lowest in Comoros, Central African Republic and Syria 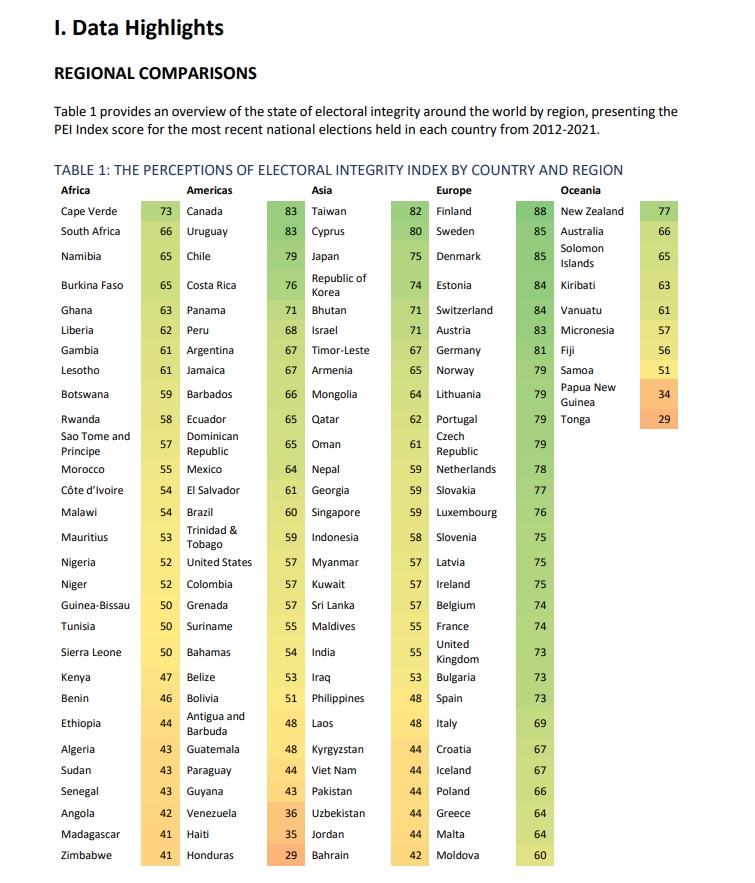 There have been major concerns about democratic backsliding in recent years, with a Summit for Democracy being launched by the United States Department of State at the end of 2021 to ‘set forth an affirmative agenda for democratic renewal and to tackle the greatest threats faced by democracies.’

Strong elections, according to the Electoral Integrity Project, are those that follow democratic principles and international standards across the whole of the electoral process. This includes voter registration, campaigning activities, electoral laws and vote counting. 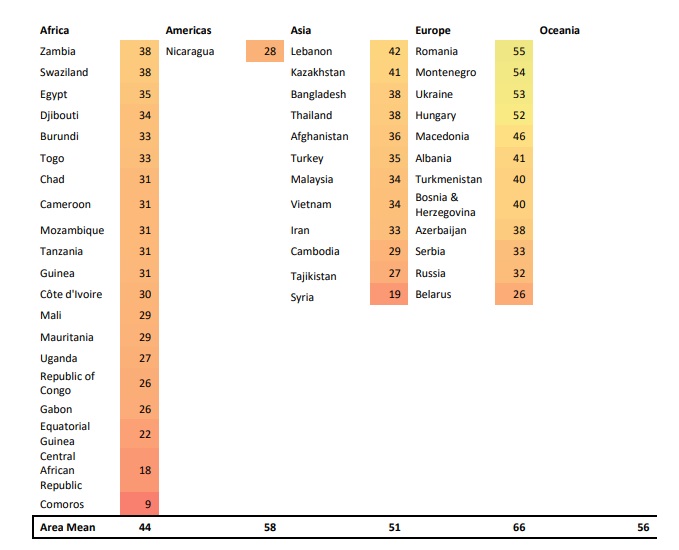 Despite concerns about democratic backsliding, the report finds there is little evidence for an aggregate decline in the quality of electoral integrity globally between 2012-21. Instead, the problems are more specific to countries, with some seeing major changes, such as a sharp decline in the acceptance of the presidential election results in the United States, as demonstrated by the January 6, 2021 attack on the Capitol.

Electoral finance was found to be the weakest area of the electoral cycle. The publishing of transparent financial accounts was the area where the world was struggling the most.

Dr Holly Ann Garnett, of the Royal Military College at Queen’s University in Canada, said: “Transparency in reporting on the sources and uses of campaign funds is the first step towards reducing the barrier that money can be to participation as a candidate or representative, particularly of under-represented groups around the world.”

Prof Toby James, Professor of Politics and Public Policy in UEA’s School of Politics, said: “The report is a call to action for those concerned about democracy around the world. Even those countries that traditionally were strong at holding elections need to look at how they can promote democracy in their own backyard.

“The report provides data designed to help policymakers, campaigners and international organisations identify areas of strength and weakness in electoral processes. These can then identify areas where reforms should be concentrated.”

The report including a full index of countries is available here: https://www.electoralintegrityproject.com/globalreport2019-2021.

The Electoral Integrity Project is an independent academic study currently directed by Prof James and Dr Garnett, and is housed at UEA and Royal Military College of Canada/Queen’s University.

The data is from a comprehensive survey by more than 4,500 expert assessments. The report compares 480 parliamentary and presidential elections in 169 countries around the world. All countries are ranked by the Perceptions of Electoral Integrity (PEI) Index.

A mother’s gut microbes can help in the development of the placenta, and the healthy growth of the baby - according to new UEA research.

Migratory birds are declining globally because of the way that humans have modified the landscape over recent decades, UEA research shows.

Babies and over 65s needed for UEA psychology research

From the very young to the somewhat older, psychology researchers at UEA are looking for participants to help with two studies.