Researchers at the University of East Anglia have teamed up with comedian Keith Lemon to show how watching movies on the big screen is officially more exciting than at home.

A team of scientists from UEA’s School of Psychology conducted a biometric study featuring the Celebrity Juice presenter and self-confessed movie aficionado - to see how watching movies on the two mediums compared.

They used state-of-the-art scientific monitoring equipment to measure his excitement levels when watching a film on the cinema big screen versus at home on a TV screen.

The study, commissioned by Showcase Cinemas, concluded that not only do film fans find movies more exciting when watched on a large cinema screen but that those audiences are also less distracted and pay more attention to the movie when inside a cinema.

The news comes as cinemas around the country open their doors.

Dr Samuel Forbes, from UEA’s School of Psychology, led the experiment. He said: “Through assessing Keith’s reactions in two conditions using eye-tracking, ECG and emotional coding, our observations were overall consistent with greater engagement and physiological reactivity when a film was viewed in a cinema than on a TV in a lounge.

“The observations made during this demonstration indicate that people find watching a film in a cinema more engaging than on a TV.”


Keith Lemon was wired up and tested while watching the same film in both a Showcase cinema and in a living room TV set up on a 40” screen. 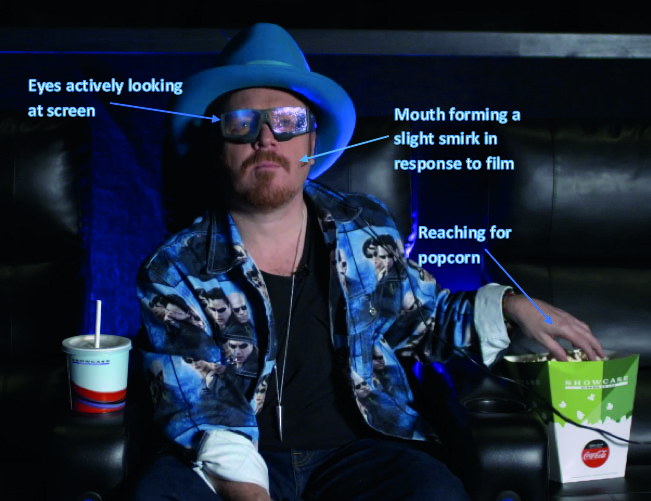 Keith watching a movie on the Cinema Screen 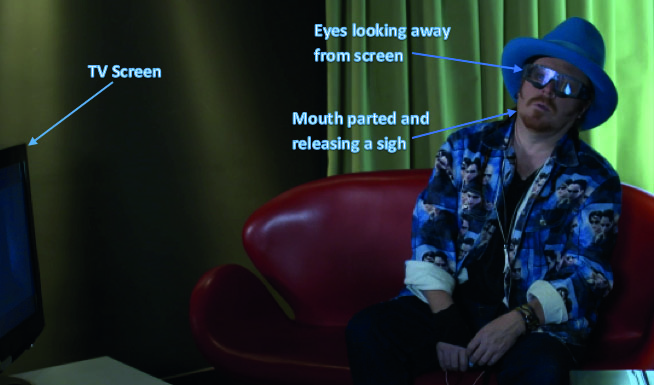 Keith watching a movie on a TV screen

The TV presenter wore special eye-tracking glasses to record where he was looking during the whole experiment, plus a wireless electrocardiogram (ECG) to measure heart rate variability. A video camera was also set up facing Keith to record his reactions, and his facial expressions were monitored using a special coding system which detects even the tiniest changes.

In the cinema, Keith’s heart rate was much more variable throughout the movie - illustrating that his excitement levels were far higher. The number of beats per minute fluctuated more strongly and frequently than when watching the same movie on TV, where his heart rate remained more stable and did not appear to change much in response to events in the film. The result was a significantly greater variability in heart rate in the cinema (9.5) versus watching the movie on the TV set (2.7).

Dr Forbes said: “Keith’s eyes were tracked in the same way when watching the film on the big and small screen. The measurements, using a heatmap, showed where his focus was concentrated at all times and indicated that he was more focused in the cinema. 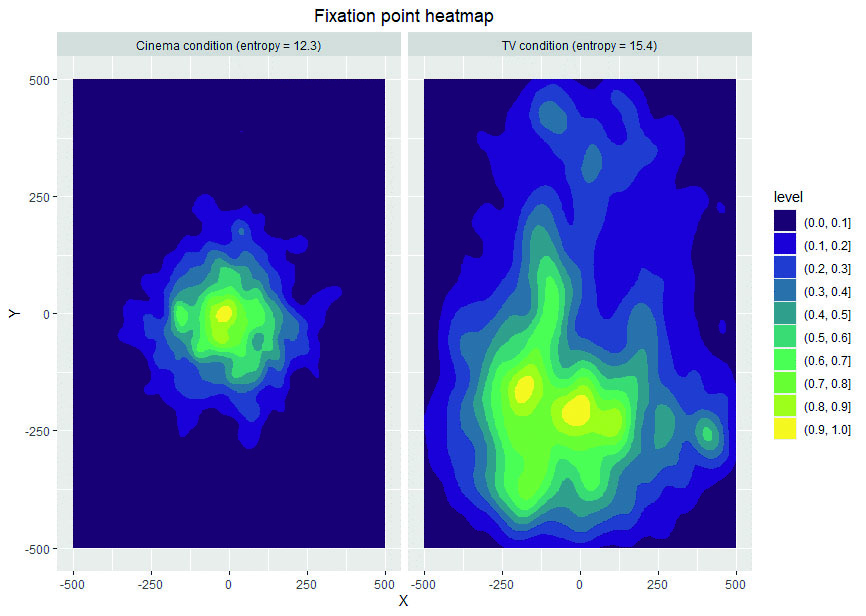 Keith's eye gaze heatmaps in the Cinema (left) and while watching TV (right).

“The heatmap has a more dispersed pattern when he watched the TV, suggesting he was more distracted (looking around and not paying full attention to the movie), as opposed to the more concentrated pattern in the cinema condition, highlighting his greater focus on the big screen.

“Keith showed a higher number of negative expressions, for example expressions that may indicate boredom, when watching the TV, where 71% of reactions were coded as negative.

“Keith also looked away from the TV screen 4 times but did not look away from the cinema screen at all and remained engaged with the film, even when reaching to eat popcorn.”

Mark Barlow, General Manager, Showcase Cinemas UK, said: “We wanted to truly test the power of the big screen versus watching a movie on a standard TV set. So, we employed a team of scientists to carry out a biometric study using our friend Keith Lemon as the subject.

“It’s great to see that science underlines what many of us who work in the industry already knew - that there is really nothing to compare to watching a film on the big screen. It’s more exciting in every sense, as this scientific study has shown.”

Valve replacement heart surgery should be performed earlier than conventionally thought for people with aortic stenosis – according to new research from the...

From testing for plastics in teabags to a Q&A with Countrywise’s Liz Bonnin: UEA’s Green Film Festival is back

Following a two-year pandemic hiatus, the Green Film Festival at the University of East Anglia (UEA) is back from Thursday 19 May - Saturday 21 May, offering...

Not all is rosy for the pink pigeon, study finds

The authors of a major study on the once critically endangered pink pigeon say boosting the species’ numbers is not enough to save it from extinction in the future.

From saving the world’s animals through socks, improving animal nutrition to sequencing COVID-19 genomes and developing a diagnostic device for dizziness, there...

Microplastics are being transported to some of the most remote places on earth by the wind, according to new research involving the University of East Anglia.